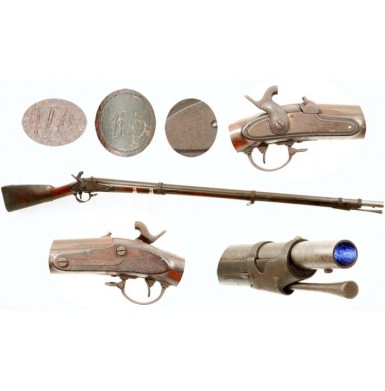 The US M-1842 Muskets produced by Benjamin Flagg are among the rarest and most intriguing military long arms produced in the United States during the antebellum era. The guns are actually secondary Confederate arms, as all were delivered to the state of South Carolina, and were the forerunners of the South Carolina manufactured William Glaze & Company arms, as Glaze ordered the Flagg guns for South Carolina and then enlisted Flagg in the subsequent manufacture of his own arms. The story of the relationship between the Flagg marked muskets, Glaze and the eventual manufacture of the Glaze arms is somewhat convoluted, but I will do my best to make the relationships simple and understandable.

The muskets delivered by these three distinct contracts have some very similar featured. In all cases, the major components are either the product of the Waters factory or are condemned US musket parts that Waters acquired on the open market. The guns are essentially commercial copies of the US M-1842 musket. The first 100 guns are unique in that they are marked on their locks B. FLAGG & Co and do not bear Waters markings. It is not clear if this was an attempt to disguise their source, or if it is because the William Smith & Co contract was secured by Flagg and not by Waters. The former seems more likely, as Flagg was the recipient of the 1836 pistol contracts, but the guns are still marked A.H. WATERS & Co. Even some of the later muskets “produced” by Glaze have Waters marked locks. Another unique feature of the Flagg muskets is that they have a German silver wrist escutcheons with a number engraved on it. To date the highest known number is 66, and it is believed that these first 100 muskets were numbered from 1-100. The interior of the barrel channel was additionally marked with the same number as the wrist, either by stamping or with a piece of paper with the number written on it, or in some cases, in both ways. The buttplate tangs of Flagg muskets were either left blank, or were marked with a script US, rather than the typical block “US’ of arsenal produced M-1842s. The 660 guns from the second contract bore Waters marked locks and some were fitted with brass furniture. The use of brass furniture would typify many of the Glaze contract muskets later on. With the very limited delivery of these guns, noted gun author and researcher Howard Madaus rates Flagg contract muskets as “Exceedingly Rare”, with less than 50 believed to be in existence, which seems a very high survival rate for such a limited production arm in the years leading up to the Civil War. I would like to extend my thanks to George Moller for his excellent research in sections 215.6-215.68 of American Military Shoulder Arms Volume III in providing the basis for the foregoing history and explanation of the Flagg contract musket.

Offered here is an out of the wood work, untouched, VERY GOOD ATTIC condition Benjamin Flagg contract US M-1842 pattern musket for the state of South Carolina. This is one of the 100 guns contracted for in 1849 and delivered in April of 1850. The gun has the correct German silver wrist escutcheon and is correctly engraved with “shadow” numbers, in this case the number is 15. This same number is found stamped inside the barrel channel of the stock and the remnants of an old piece of paper are in there are well which probably had a “15” written on it also. The barrel channel also has the assembly marks of two “X’s and a “+” sign chiseled into it. The interior of the lock has the assembly number 1 on all of the interior parts, and the inspection initial R. This same “R” is also present on the side plate and was probably stamped on other parts as well, but is no longer visible due to the years of oxidized build up and pitting on the metal. The letters AC are stamped in the wood behind the triggerguard, and are probably another inspection mark. The lock is marked in three vertical lines behind the hammer B. FLAGG & CO / MILLBURY, MASS / 1849. The lock markings are only partially legible, with the first line: “B. FLAGG & CO” and the date being the most visible and the middle line being almost completely obscured by age and oxidation. The lock appears to have been filed in this area, as old tool marks are visible under the heavy brown oxidation. This suggests that the lock was originally marked Waters and was ground and re-stamped at the factory, which is common on known examples of Flagg muskets. Due to heavy oxidation, no proof marks or date are visible on the barrel, and the musket number “15”, which is usually found on the top of the barrel and on the barrel bands is no longer visible in any of those locations. The buttplate tang is marked with the expected script US that is often found on Flagg muskets. The gun, as noted is in about “very good attic” condition. The musket is 100% complete, correct and original in every way, but has suffered from 100+ years of poor storage, possibly in a barn or attic. The metal has a very thickly oxidized brown patina over all parts, with the exception of the muzzle that was clearly protected by a bayonet for many years. However, there is a distinct brown oxidation line along muzzle that matches the mortise cut of the bayonet, which allowed that metal to discolor over time. The metal is evenly pitted over all of the surfaces, with the lock showing the least amount of pitting and the buttplate showing the heaviest. The barrel and barrel bands show very even light to moderate pitting over all of their exposed surfaces, while the metal of the barrel under the bands and underneath where the barrel was protected by the stock, is mostly smooth without pitting and had a dulled pewter patina. The rear most barrel band has split along its entire length on the reverse at the shoulder of the stock where the barrel and stock meet. This could be easily repaired, but I am leaving the musket in “as found” condition. The bore of the musket is in about VERY GOOD condition and is partly bright with patches of oxidation and darkness scattered along its length. The smooth bore show scattered light to moderate pitting with most of the more serious apparent roughness in the last 6” of the bore. However, this may be residue and collected dirt that might well clean out with some serious scrubbing. The lock of the musket is mechanically excellent and functions perfectly on all positions. The lock remains quite crisp and tight and the interior of the lock is bright and shiny with blued components and shows practically none of the effects of the poor storage that has oxidized the exterior of the lock. The musket retains both original sling swivels and the original, full-length trumpet headed ramrod, complete with full threads at the end. The German silver wrist escutcheon with the engraved number 15 is deeply tarnished and matches the untouched, attic appearance of the gun perfectly. The stock is in about FINE overall condition and is free of any breaks or repairs. The stock is full-length and solid and has never been cleaned or sanded. It retains sharps lines and edges and shows the accumulation of over a hundred years of dirt, grease and gunk. There are also some old flecks of patin present on the stock, typical of many attic or barn found Civil War muskets that were of so little regard that they were not even moved when structures were painted during the late 19th or early 20th century. The stock shows only the expected light handling bump, dings and minor mars from use and service but shows no abuse or damage. The extremely dark, uncleaned patina of the wood matches the metal of the musket perfectly.

Overall this is a really wonderful completely untouched example of an extremely rare Benjamin Flagg contract South Carolina Militia M-1842 Musket. The gun is 100% complete and correct and is one of those very rare muskets missing from most collections. It is an especially important musket for any South Carolina centric or secondary Confederate arms collection, and these muskets rarely appear on the market for sale. The last one I saw was cleaned to death, and this one (while poorly stored) is completely untouched. The gun walked into the Chantilly, VA gun show over the New Years Weekend, with the owner saying he had purchased it from a long out of business gun shop in Manassas, VA, where it had been sold on consignment for the family that found it on their property. Several South Carolina infantry regiments were present at the battle of First Manassas including the 2nd 3rd, 4th, 5th, 7th and 8th SC Volunteer Infantry, as well as Wade Hampton’s Legion. It seems quite likely that this musket is a relic left behind by a solider in one of those units. While this is certainly not a mint condition specimen, it is a classic example of a Confederate musket, used by the state of South Carolina and completely “in the black”, as most serious Confederate collectors prefer to find them.