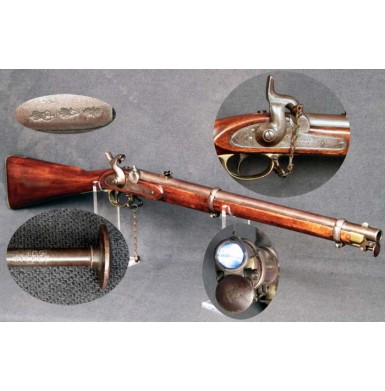 This is a wonderful and complete example of the scarce Pattern 1856 “Enfield” Cavalry Carbine as imported during the American Civil War. The P-1856 Cavalry Carbine is a rarely encountered Civil War era long arm, and even those carbines without Confederate import marks bring significant prices. While the US Government records indicate that only 250 of the P-1856 carbines were purchased, the Confederacy purchased approximately 10,000 of the guns. This seems like a significant number, but it is quite low when compared to the fact that most researchers put the total of all English long arms imported by the Confederacy at somewhere between 300,000 and 500,000. Even by the most lenient standards, that puts the importation of P-1856 carbines at well under 5% of all Enfield pattern arms obtained by the Confederacy. Their absolute paucity on the collectors market underscores that fact that these guns saw hard use during the war and were clearly used up in the field. Extant examples of commercial (non-British military) P-1856 carbines tend to appear in two conditions: heavily used & very worn, or nearly mint guns from captured Confederate Blockade Runners. In either case, the guns are very scarce and are rarely found available for sale. One reason for their lack of survival comes from the Report of William H. H. Terrell, Adjutant General for the State of Indiana. The report dated December 1865 concerning the Seventh Indiana Cavalry states in part "On the 21st of December (1864) the Seventh Cavalry moved from Memphis with a cavalry expedition under General Grierson. On the 28th Forrest's dismounted camp at Vernon, Mississippi, was surprised and captured, and a large quantity of rebel stores destroyed, including sixteen railroad cars, loaded with pontoons for Hood's army, and four thousand new English carbines." This clearly indicates on clear reason for the scarcity of these guns, when the Federal troops found them, they destroyed them. Since nearly all US cavalry were armed with some form of breech loading carbine, a muzzle-loading carbine was of no real value. However, US troops regularly used captured CS imported Enfield rifle muskets, as they were of use to the infantry. The Pattern 1856 Cavalry carbine was primarily a late war purchase and import by the Confederacy. To date, only a small number of P-1856 carbine invoices have been located that are dated prior to 1863, all of which were purchased through S. Isaac, Campbell & Co. However, in 1863 and 1864 a number of the guns were purchased by the Confederacy. Somewhere between 2,500 and 5,000 were purchased from Sinclair-Hamilton & Co, and it is possible that more were acquired from this preferred provider of arms to the Confederacy. The “Payne Papers’ ledger clearly documents the arrival of ten different shipments of P-1856 cavalry carbines at the Port of Wilmington, NC. These guns arrived between July of 1863 and November of 1864, and the shipments totaled 4,700 guns. Additional imports were transshipped from Havana Cuba into Texas between November of 1864 and April of 1865. Between 2,500 and 5,000 of the Pattern 1856 carbines entered the Confederacy via this route during the last months of the war. All documented Confederate purchased P-1856 carbines have locks that are marked Barnett, EP Bond or TOWER. The Bond marked carbines have strong provenance to having been part of the final shipments that entered the Confederacy through Texas. While a handful of JS/Anchor and Anchor/S marked Confederate carbines are known, it appears that many were probably unmarked, as the entire system of marking import arms became more and more lax as the war drug on. It is also reasonable to assume that as least some P-1856 carbines were purchased by Confederate speculators for sale in the South, and these guns would not have had any type of Confederate importation marks.

This Pattern 1856 Cavalry Carbine is in about VERY GOOD+ to NEAR FINE condition. This one clearly saw some use, but does not show the heavy wear and abuse that is often encountered on earlier guns that were imported in 1862. The gun was manufactured by John Edward Barnett & Sons of London, a maker that truly deserves the name “Gun Maker To The Confederacy”. The Barnett gunmaking dynasty began in London in 1796 with Thomas Barnet. In 1810 the company became Thomas Barnett & Sons and in 1832 John Edward Barnett took over the business. In 1842 the firm became John Edward Barnett & Sons and operated under that name until 1901, when the firm was renamed JE Barnett & Sons LTD. The business closed in 1908. During the Civil War years, Barnett operated at Brewhouse Lane, Wapping in London. Barnett was intimately involved with the British War Department and Board of Ordnance and operated as a preferred vendor to the British military, as well as being a very successful commercial gun maker. During the early days of the Civil War, Barnett obtained large numbers of obsolete British military arms, including P-1851 Mini” Rifles and Brunswick Rifles, which they refurbished and sold to S. Isaac, Campbell & Company for sale to the Confederacy. Barnett also acquired Confederate state contracts and delivered arms on contract for the states of South Carolina, Georgia and North Carolina. Due to the firms strong relationship with the Confederacy and Isaac, Campbell & Co it is reasonable to assume that practically all of their military firearms output during the Civil War era, which was not purchased by the British government, ended up being sold to the Confederacy. The lock of the gun is clearly marked BARNETT / LONDON forward of the hammer, and no crown is present to the rear of the hammer. The lock retains traces of its original mottled case coloring, mixed with a plum brown patina. The interior of the lock is marked BARNETT over the mainspring and PARTRIDGE around the mainspring boss. John Partridge was a Birmingham based gun and lock maker in the early 1860’s. The lock is mechanically excellent and functions flawlessly. The barrel is marked with standard London commercial proofs at the top left of the breech, and is marked with a pair of 25 gauge marks, indicating .577 caliber, under the barrel. The underside of the barrel is additionally marked S C as well as J B. The “SC” likely refers to the barrel maker and the “JB” indicates John Barnett. The barrel has a smooth brown patina, with some traces of plum and minor traces of original blue finish. There is some light flash peppering around the breech and bolster area of the barrel, and a couple of small impact marks on the barrel, probably from carrying on a carbine sling. The bore of the carbine is bright and rates about VERY FINE+ to NEAR EXCELLENT. The rifling remains crisp and the bore shows only some light pitting along its length and a couple of patches of minor oxidation closer to the muzzle. The original swivel rammer is in place under the barrel and still functions correctly as well. This is not common, as these somewhat delicate and very cumbersome rammers were often “lost” in the field during use, although it is difficult to know if the losses were accidental or intentional. We do know that Confederate Cavalry commander JEB Stuart specifically requested the P-1856 Artillery carbine for his troops, since it did not have a swivel rammer. The swivel rammer is clearly marked T &C / GILBERT. Thomas & Charles Gilbert were Birmingham based “small work” makers, who produced ramrods, barrel bands, screws, etc. They went out of business at the end of 1862, so the carbine was likely produced no later than mid-1863, with Barnett using up older parts on hand. The original sling bar and ring remain in place on the stock flat of the carbine. Both of the original screw protecting “doughnuts’ is present on upper and lower barrel band tension screws. These are parts that are almost always missing from Civil War period Enfield pattern arms. The original rear site base is in tact on the barrel, along with both of the original leaves for sighting at 200 and 300 yards. The gun shows some service and light wear, but no abuse. The brass furniture has an attractive golden patina. Rather than the usual small stud, forward of the triggerguard, to hold the snap cap ring and chain (cone protector), the carbine uses a rifle musket triggerguard, complete with sling swivel. I have only encountered this variant on a handful of Civil War era Barnett made P-1856 carbines. The snap cap (nipple protector) is present, along with the brass chain and original iron snap ring. This is a nice small part that is usually missing from these guns. The screws in the buttplate and triggerguard are all crisp, and remain in their original timed positions, showing no indication of having been turned since the gun was assembled. The stock is in about VERY FINE+ to NEAR EXCELLENT condition, especially for a likely Confederate used saddle weapon. The stock shows only a few minor bumps and dings. The gun retains very sharp edges and shows no signs of having been sanded. The stock does have an old, thin coat of varnish on it, which has helped to preserve the stock nicely. The only issue worth mentioning is a short surface grain crack in the obverse of the buttstock, extending a couple of inches from the buttplate towards the center of the stock. It is only a surface grain separation, the result of age and drying, and is not structural in any way. The stock is complete and solid with no breaks or repairs noted.

Overall this is a really great looking, untouched and un-messed with example of a very scarce Civil War era imported Pattern 1856 “Enfield” Cavalry Carbine. The gun is almost certainly a Confederate purchased weapon, by the famous London gunmaker Barnett. This is a really lovely, no apologies, complete and correct P-1856 cavalry carbine that any serious collector would be extremely happy to own.