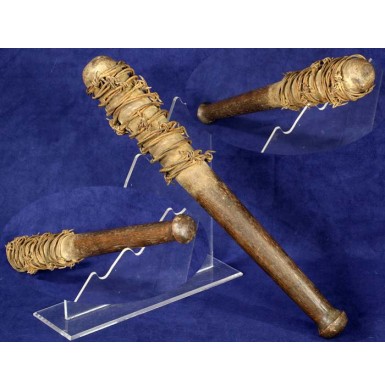 Offered here is a wonderful example of a Improvised First World War Trench Club. The field expedient weapon took a simple turned bat-shaped piece of wood and made it significantly more effective and imposing by wrapping the head with multiple strands of barbed wire. The club measures 16.3” in overall length, with a roughly 7” long head section that is 2.6” in diameter and has a classic truncheon style appearance. Both the top and bottom of the club show impression marks where the shaft was held in place while turned on the lathe. The shaft tapers to a comfortable 1.2” diameter grip near the bottom and has an enlarged, 1.5” diameter mushroom shaped pommel cap at its base; to help ensure a secure grip when the club is swung. Interestingly, the club does not have any kind of hole for a lanyard or strap in the grip, nor has the grip been grooved, textured or modified in any way to increase the security of the gripping surface. The club weighs in at a light and handy 1.36 pounds (about 22 ounces). The most imposing part of the club are the twelve wraps of double-strand barbed wire that encircle the head of the club, secured by a combination of flat-head nails and “U” shaped fencing staples. This wrapping would have certainly increased ripping and tearing capability of the club when it was swung. The club has a lovely, untouched dark patina on the lower portion of the club body, with the upper section where the wire is showing a dirty, uncleaned look with some surface dirt and dust. The overall appearance of the club suggests it may have been barn found, spending many years in a location where the club’s wood dried and accumulated dirt, but where the barbed wire could oxidize and develop a thick brown patina with surface rust. The country of origin of this club is unknown, but based upon the nicely turned bat shaped profile, it is my opinion that the club is either of English, or possibly German origin; it does not appear typical of Austrian clubs.

Overall this is a very attractive, solid and original example of a World War One Improvised Trench Club. This particular club is from the collection of noted trench club researcher, collector and author David Machnicki, author of At Arm’s Length “ Trench Clubs and Knives Volumes I & II. This club is pictured and described on page 4 of Volume II. Real First World War trench clubs do not appear on the market very often, although well-crafted fakes do from time to time. For any collector of Great War small arms, the Trench Club is one of the most intriguing weapons for that conflict, a throwback to man’s primeval urge to fight for survival using the most basic of weapons, in a war that featured the most advanced technology of the time.