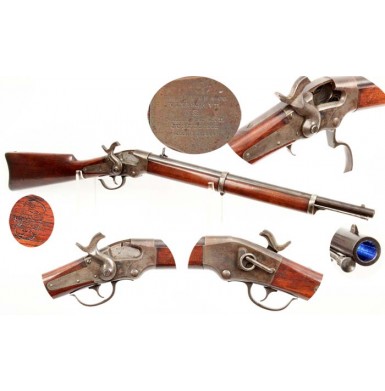 The Ball Carbine was designed and patented by Albert Ball of Worchester, MA. Ball spent the 1850’s working for various Massachusetts based gunmakers, including Lucius Pond. Ball secured a patent for a breechloading, metallic cartridge carbine (#38,935) on June 23, 1863. The patent rights were subsequently purchased by E.G. Lamson of Windsor, VT, in order to produce the carbine. Lamson had been a principle of the firm Lamson, Goodnow & Yale (LG&Y), which had been organized in 1861 to produce rifle muskets on contract for the US government. Lamson, Goodnow & Yale had purchased the majority of the assets of the defunct Robbins & Lawrence Company (also of Windsor, VT), and as a result of the old Robbins & Lawrence P-1853 Enfield Rifle Musket contract from the Crimean War, had all of the tooling and machinery necessary to produce that model of long arm. L.G.&Y. became one of three firms (including Colt & Amoskeag) to produce the “Special Model” M-1861 rifle musket for the US government, a sort of Enfield / Springfield hybrid that had many Enfield-style features and was easier to produce on the machinery they already had. In 1864 Goodnow & Yale left the firm, and Lamson took sole control. It was at this time that Lamson began to actively seek contracts to produce breechloading metallic cartridge carbines for the US military. In addition to purchasing Ball’s patent rights, Lamson also purchased the patent rights to the Palmer bolt-action carbine. Lamson managed to secure contracts to deliver 1,000 of each of the patent carbines. Although both were originally to be produced in .44RF, the US Ordnance Department changed the specification in mid-stream, requiring the guns to be manufactured in .50 Rim Fire Government. The newly adopted .50RF Gov’t cartridge (in actuality the improved 56-50 Spencer) was an attempt by the Ordnance Department to standardize the caliber of self-contained cartridge arms, and reduce the number of specialized cartridges in service. Two sample Ball carbines were delivered to the Ordnance Department on January 17, 1865. With Ball now working as Lamson’s superintendent, the company proceeded to manufacture 1,000 each of the Palmer and Ball designs. None of which would be delivered before the end of the American Civil War. The 1,000 contracted Ball carbines were all delivered on May 14, 1865, only 6 days after General Robert E. Lee surrendered at Appomattox Court House. Of the total of 1,002 Ball carbines delivered, only the 2 sample carbines arrived prior to the end of the war. The Palmer carbines were delivered about 1 month later. The end of the Civil War meant that there would be no additional US military contracts for his designs, and that orders for martial arms were going to end abruptly. In 1868 Ball left the E.G. Lamson company (and the firearms industry) and went to work for the Sullivan Machinery Company of Claremont, NH. He lived until 1927 and received 135 design patents during his lifetime.

The Ball Carbine represented a sort of “improved” Spencer carbine. The Ball design used a tubular magazine, as did the Spencer, but it was mounted under the barrel of the gun, instead of in the buttstock. The 7-round magazine was loaded through the action, which was opened by lowering the triggerguard. This allowed the insertion of cartridges directly into the magazine tube under the barrel. The magazine was tensioned by a long spring, which had to be compressed and retained to allow loading. This was accomplished by pulling a long rod that resembled a cleaning rod, out from the forend of the carbine. When the rod was fully extended, the spring was compressed and was captured by a small catch at the end of the forend. Once the magazine was fully loaded, the catch was released and the spring tensioned the magazine to push the cartridges towards the action. Much like a Spencer, lowering the triggerguard opened the action, ejected a fire cartridge and allowed a fresh cartridge to be pushed onto the lifter. Closing the action chambered the round. As the action could only be opened when the carbine was cocked, it was now ready to fire. The Ball Carbine had a 20 ““ round barrel and a two piece walnut stock and forend. Like most cavalry carbines of the era, a sling bar and ring were mounted on the left side of the receiver. The barrel was blued and the receiver was case hardened, as were the triggerguard, hammer, and buttplate. The forend of the carbine was secured by a barrel band about mid-way between the receiver and muzzle, and with a combination barrel band/end cap near the muzzle, which contained the magazine spring catch mechanism. The spring compression rod, which extends below the lower right side of the barrel was left “in the white” and was not finished.

This particular Ball Carbine is in about FINE+ condition. The gun is 100% complete, correct and original in every way. The gun is mechanically excellent and all systems function as they should, including the action, hammer, trigger and magazine system. The gun retains about 60%+ original blue on the barrel, which shows some fading and light wear, and has blended with a lovely plum-brown patina. The receiver retains about 40%+ case coloring overall, with the right side of the receiver retaining slightly less color than the left side. The triggerguard and the buttplate both retain about 20% of their case coloring, mixed with a smoky gray patina. The metal of the carbine is almost entirely smooth throughout, with only the most minor patches of lightly scattered pinpricking present on the receiver and barrel, with the only exception being a thumb-sized patch of lightly oxidized surface roughness immediately behind the upper barrel band/nose cap, and some similar roughness around the muzzle. The muzzle of the carbine rates NEAR FINE and remains mostly bright with excellent, crisp rifling. The bore shows some lightly scattered pitting along its length, with more moderate pitting confined to the last 3”-4” nearest the muzzle. The reverse side of the receiver is clearly marked in 6 horizontal lines:

The carbine retains its original L-shaped aperture leaf sight which is graduated for 100 yards on the short leaf, and has a 400 yard aperture and a 600 yard notch on the longer leaf. These are simply marked 1, 4 and 6. The sight is also marked with a single S inspection mark. This same “S’ is found on a number of small parts on the carbine. The original front sight is in place near the muzzle as well. The original sling bar and ring are present on the left side of the receiver. The buttstock and forend of the carbine rate about FINE overall condition and are very crisp and retain sharp lines. They are solid and complete without any breaks, cracks or repairs. As would be expected of a 150-year old military carbine, the gun does show some minor bumps and dings in the wood, the result of storage and light use after the war. The left wrist retains a very crisp and clear GGS script cartouche, the mark of armory sub-inspector George G. Saunders, who inspected arms from 1856-1870, including Colt Dragoon revolvers, M-1840 Foot Officer’s swords, and M-1860 Light Cavalry sabers.

Overall this is a really nice example of one of those scare late-Civil War carbines that just didn’t quite make it in time to reach the field. The Ball Carbine is a very interesting gun that shows some of the design refinements that occurred with metallic cartridge repeating arms during the American Civil War. Some of the features of the Ball, like the tubular magazine covered by a wooden forestock and the side action loading system for that magazine, would be improved upon and utilized in the M-1866 Winchester rifle and carbine. The Ball represented the 2nd generation of US repeating carbines, and would not be equaled again until the adoption of experimental bolt action repeating carbines during the following decade.