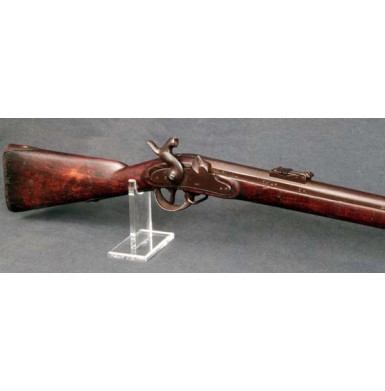 The firm of Herman Boker & Company of New York (with satellite offices in Li’ge & Birmingham) imported 188,054 arms for the use of the US military during the first two years of the American Civil War. Boker provided a wide assortment of mostly Continental arms, including various Austrian and Prussian models. In fact, his guns were of such varied varieties, that he submitted numbered samples to the Ordnance Department to approve for purchase, and thanks to the diligence of Ordnance Officers like Major Peter V Hagner, we have well documented descriptions of these arms. One of the sample groups, Sample 2, was a comprised of Austrian M-1854 Lorenz rifle muskets in their original Austrian caliber of .54 (13.9mm). There were 24,359 pieces in the lot of muskets that were purchased by the Ordnance Department. Of those, 21,945 were provided with “fixed sites” at the rate of $13.11 each. However, Hagner noted that a few of the guns were fitted with “Enfield style rear sites”. Since the balance of the guns in the lot (2,414) were billed at $15.67 each, we can reasonably assume that these were the guns with the long-range rear sites, which cost the Ordnance Department an additional $2.56 each. Over the years collectors and researchers have known of the existence of these unique Enfield-sighted Lorenz rifle muskets, but they very rarely appeared in collections or for sale. Today, I am only aware of a handful of these interesting Lorenz variants, and I am particularly proud to be able to offer this one for sale.

This is a classic example of a Boker Sample #2 Austrian Lorenz Rifle Musket with Enfield Style rear site. As previously noted, it appears from period documents that only 2,414 of these guns were produced and imported during the American Civil War. Like most of Boker’s import guns, these guns were used Austrian military guns, which were refurbished by the gunmakers of Li’ge. This musket retains Austrian military style issue and rack numbers on the lefts side of the octagon breech area. The lock of the gun is marked in the typical Austrian style, with the double-headed Austrian Eagle at the rear of the lock plate, and the date of manufacture forward of the hammer, with the first digit omitted. This musket was manufactured in 1859, and is clearly marked 859 on the lock plate. The gun is marked with the usual Austrian style assembly numbers throughout, in this case 77 appears on nearly every part, even the necks of the screws. The interior of the lock is sub-assembly marked 37 on all of the internal parts, and the lock itself is also marked with the master mating number 77. The front barrel band is marked with a small set of inspectors initials on the left side, near the Austrian * touch mark. The initials are WN and appear to be US style inspector marks. They are located in the same area the US Ordnance Department sometimes applied alphanumeric mating codes to match bayonets to the muskets that they fit. The top of the breech is marked with the original Austrian contractors name (who produced the gun) although it is illegible. This has been over-stamped with some sort of inspectors mark, which is not particularly legible either. The gun is marked with the US style rack or issue number 26 on top of the stock comb, in front of the buttplate tang. The ramrod bears the usual Austrian * touch mark, and the rack number 46, likely and indication that the rod was originally in another gun from the same lot, with a rack number 20 higher than this one. The Enfield pattern rear site is marked with a (CROWN) / JH on the elevating slide.

The gun is in about ATTIC FINE condition overall. The gun is 100% complete and correct. The lock functions crisply and is in mechanically fine condition. The musket retains the complete and correct Enfield style rear site, and both original sling swivels (although the rear swivel is frozen and somewhat bent). The gun has a deep, thick chocolate patina over all of the metal surfaces. This is a mostly smooth patina, with only some scattered patches of light peppering and pinpricking present on the metal. The bore retains the original .54 caliber, 4 groove rifling, and is in about VERY GOOD condition. The rifling remains crisp and sharp, and the bore is mostly bright and would clean out even better. There is some light scattered pitting, mostly in the grooves, along the length of the bore. The stock has a deep, dark, un-cleaned look as well, that matches the metal of the rifle wonderfully. The wood to metal fit is actually of a higher level than normally encountered on Austrian guns. The Austrian military cheek piece is in place on the left side of the buttstock. The stock rates about VERY GOOD+. The stock is free of breaks or repairs, but does show a few minor surface grain drying cracks, which are quite common on Austrian arms. The most notable runs from the rear of the lock mortise into the buttstock, but this is a surface grain crack only and is not structural in anyway. There is a similar surface grain crack in the cheek rest as well. There is a small chip of wood missing behind the middle barrel band, on the right side of the stock, that has a similar accompanying ding in the barrel. This appears to be the result of the gun being used to deflect some sort of edged weapon blow. The damage is minor in terms of display, but simply adds more authentic period battlefield use to an already unique musket. The stock shows the normal assortment of scattered bumps, dings and minor impact marks from use in the field and a 151 year life. The edges of the stock remain relatively crisp and sharp, and the stock has a lovely look overall.

For a collector who has a particular interest in the imported arms used during the American Civil War, the Austrian M-1854 Lorenz is one of the most important and heavily used weapon by both sides. The guns were produced in a number of variations, and a serious collection of import arms needs at least a handful of Lorenz rifle muskets to cover the primary variants. This Boker Sample #2 gun is simply a gorgeous, totally untouched example that is absolutely complete and correct. These scarce Enfield sighted Lorenz variants are rarely encountered for sale and are missing from even the most advanced import arms collection. This is a wonderful example that displays fantastically and requires absolutely no apologies. It belongs in an advance collection of Austrian long arms used during the American Civil War.