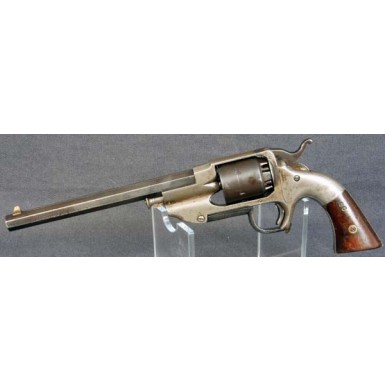 This is a very nice example of a fairly scarce secondary US martial percussion revolver - the Allen & Wheelock Center Hammer Navy (Flayderman’s 5A-061). The Center Hammer series of percussion revolvers (including the .44 Army, the .36 Navy and the “Providence Police”), were manufactured during the early days of the American Civil War, after Allen was forced to stop producing their Center Hammer Lipfire revolvers, due to their infringement on the Smith & Wesson / Rollin White “bored through cylinder” patent. Although Flayderman’s lists these revolvers as having been manufactured from 1861-1862, in reality, the guns were more likely manufactured from 1862 through early 1864. Approximately 500 of these revolvers were produced during this period. The guns were conventional, single action percussion revolvers with 6 shot cylinders. The standard (and most desirable) barrel length was 7 “, although the guns were also produced with 5”, 6” and 8” barrels. The guns were made in two minor variations, with the early guns having a hammer that swiveled on the sideplate screw, and cones (nipples) that screwed into the cylinder from the inside, through the chambers. The later guns having a pin cast into the right side plate, upon which the hammer is slung, and the cones screw into the cylinder in the conventional manner. This is one of the later guns, likely made in 1863.

The Allen & Wheelock Center Hammer Navy offered here is in about VERY GOOD to VERY GOOD+ condition. The pistol is mechanically excellent, and times, locks up and functions exactly as it should. The unique triggerguard/cam action loading lever is complete and fully functional. The left flat of the 7 ““ octagonal barrel is clearly marked in two horizontal lines: ALLEN & WHEELOCK. WORCHESTER / ALLEN’s PT’s. JAN. 13. DEC. 15. 1857. The inside of the loading lever/triggerguard assembly is serial numbered 399 and this same number is located on the frame (under the left grip panel), the rear face of the cylinder and on the cylinder arbor pin. The insides of the grips are both stamped 399 as well, and the left grip panel is additionally marked 99 on the exterior, upper edge. The gun has a mostly smooth metal throughout, with only some small, scattered areas of minor peppering and pinpricking present on the metal. The barrel retains some strong traces of the original blued finish, mixed with an oxidized plum-brown patina. The cylinder and triggerguard/loading lever have a similar matching patina, with an oxidized plum-brown color that has traces and patches of original blue peeking through the patina. The hammer has a similar color, mostly a dark smoky gray with some traces of case colors visible, mixed with the smoky grey & oxidized brown patina. The frame has a medium dove gray patina, with some minor erosion just forward of the cylinder chambers. There are some traces of original blued finish in the nooks and crannies of the frame, as well as some patches of minor age discoloration and oxidation. The cylinder retains all of the original cones (nipples) that are in good condition. The screws are in decent condition, with some minor slot wear present. The bore is in about GOOD+ with strong rifling present, but is dark and dirty with scattered pitting its entire length. The original brass blade front site is in place on the end of the barrel and has a lovely mustard patina. The original two-piece walnut grips are in about VERY GOOD condition. They have one minor repair at the lower front corner of the right hand grip, and otherwise show only some minor bumps, dings and mars from carry and use.

Overall this is a really attractive, complete example of one of the less often encountered large frame, long barreled Allen & Wheelock percussion revolvers. This is a good, solid gun that will look very nice in your Civil War ear percussion revolver collection.