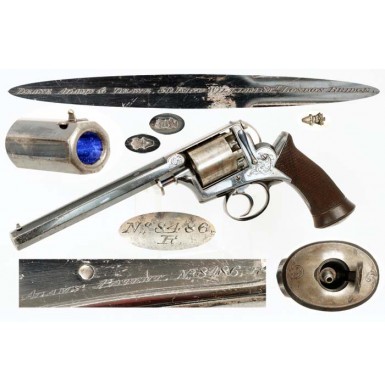 This is one of the rarest and least often encountered variations of the M-1851 Self-Cocking Adams Patent Percussion Revolver, the Dragoon model, a .50 caliber hand cannon. Robert Adams manufactured these exceptionally strong and powerful handguns under his solid frame revolver patent. In 1851 Adams was granted a patent for significant improvements to revolvers by patenting a unique design with the barrel and frame of the pistol were forged as a single piece. This made the pistol incredibly strong and was a much stronger system than any of the other revolvers system then commonly in use, particularly those used by Colt which used a wedge to attach the barrel to the frame and had no top strap to reinforce the frame. Adams also received patents for a spring-loaded, frame mounted safety device and a spring based cylinder arbor latch. All of these features are found in this wonderful Dragoon sized holster revolver. The gun is clearly marked on the left side of the frame ADAMS PATENT No 8436 R. The cylinder is clearly marked with the same number over the same letter: 8436 / R. The R suffix indicates manufacture by Robert Adams, who was a partner in the firm of Deane, Adams & Deane of London at the time the revolver was manufactured. While the number on the gun and side of the cylinder is a “serial number”, it is more importantly a way by which the numbered revolvers were tracked for the payment of patent royalties. In fact, other manufacturers that produced Adams pattern guns under license, were actually given specific serial number ranges to work within, as well as letter suffixes to more easily determine the manufacturer of the revolver. While specific serial number records are not available for Adams revolvers like they are for Colt’s and Smith & Wesson’s, we can determine with some certainty that this revolver was probably produced between mid-1853 and mid-1854. The revolvers produced and marketed by Deane, Adams and Deane in 1851 & 1852 included a reference to the fact that they had manufactured guns for royal family during that time frame and included as part of the barrel address Manufactures to HRH Prince Albert. This revolver has the later style barrel address that simply reads: DEANE, ADAMS & DEANE 30 KING WILLIAM St, LONDON BRIDGE. Starting about the middle of 1854 Adams added a frame mounted loading lever of his own design, as well as a new frame mounted sliding safety on the right side of the frame. He also changed the cylinder arbor latch system. All of these items were patented as additional improvements to revolver design towards the end of 1854 and became standard features from that point on. Since this revolver has the second style barrel address, but none of the 1854 improvements, it is fair to guess that the gun was manufactured in 1853 or early 1854. Adams produced his self-cocking, or “double action”, revolvers in a wide array of calibers, but by early 1853, the standard calibers were 38 bore (.50 caliber), 54 bore (.442 caliber), 80 bore (.38 caliber) and 120 Bore (.31 caliber). The British method of stating caliber as a “bore” or “gauge” was based on how many round balls of that size could be cast from a single pound of lead, thus the lower the number, the larger the caliber, and vise versa. Of these various calibers the 54 bore and 120 bore revolvers are most common and the 38 Bore revolvers are the least common. This was truly one of the original large bore revolvers and would have been the side arm of choice if Dirty Harry had been a mid-1850’s English policeman!

Until recently it had been assumed that there was no Confederate connection between the large 38-bore (.50) Adams “Dragoon” revolvers and those gun purchased by the Confederacy during the Civil War. The more commonly encountered 54-Bore (.442) Adams patent revolvers, primarily of the Beaumont-Adams design, are well known to have seen service in the South during the war. However, recent scholarship has uncovered that at least a handful of the .50 Adams revolvers were purchased and imported by the Confederacy and at least one dug example indicates that some made it into the field. The .50 Adams Dragoon revolver is discussed in detail in the new book The English Connection on pages 217-219 and this exact revolver is pictured in detail on pages 218-219. According to documents in the National Archives, eight cased Adams M-1851 38-Bore “Dragoon” revolvers were included in the cargo of the ill fated blockade runner Elizabeth. The Elizabeth was owned by John Fraser & Co and was captured on May 29, 1862 while trying to enter the port of Charleston, SC. Listed in the cargo manifest was a case of revolvers, marked A within a rhomboid, and the case contained “eight Deane, Adams & Deane 8 inch revolvers, in cases complete”. The barrel length clearly indicates that these were the large bore, .50 revolvers and not the more common 54-bore guns. The pre-war barrel markings suggest that these guns were purchased from existing inventory in English gun shops, likely by arms speculators, rather than the Confederate central government purchasing agents. Further indication that these large bore revolvers saw use during the war is a dug example with a 7 ““ barrel that was recovered near Brandy Station by a relic hunter in the 1960’s. This dug example with its history and provenance recently sold from an Internet relic web site. Thus the period documentation, and at least one field recovered example indicates that the Confederacy did purchase at least a few of these massive revolvers and some of them did see use in the field.

This Adams Patent M-1851 38-Bore Dragoon Revolver is in EXCELLENT + condition overall. The gun is mechanically excellent and functions perfectly, with the double action mechanism timing, indexing and locking up as well as the day it was manufactured. The gun retains 90%+ of its original bright blue throughout. The finish loss is mostly confined to the sharp edges of the 7 ““ octagon barrel and a few minor patches on the barrel and the frame where the bluing has flaked. The balance of the metal has a smooth gray patina that is starting to darken and blend with the bright blue. The barrel is clearly and deeply marked with a pair of London commercial proof marks. The 5-shot cylinder retains about 95%+ of its original case coloring, with only some very light wear along the high edges. The coloring is not as vivid as when the revolver was originally manufactured and has dulled and faded slightly, developing the typical silvery pewter color that case colored cylinders develop as the heat from firing causes the coloring to fade. The cylinder is crisply marked with the usual London proof marks between the chambers. The cylinder does show some minor scattered pinpricking on its surface, but this is relatively minor and does not detract from the stunning color that the cylinder retains. All of the original cones (nipples) are present at the rear of the cylinder, and are in very crisp condition. All of the metal surfaces of the frame and barrel are smooth and are in excellent condition. Only some very lightly scattered flecks of minor surface oxidation and very light pinpricking are scattered over the very crisp revolver. In typical Adams fashion there is some light floral motif scroll engraving present on the frame, as well as the triggerguard and backstrap. The bore is in EXCELLENT condition and is quite bright, with wonderfully crisp rifling. The bore shows only some lightly scattered pinpricking in the grooves and no significant pitting is noted. The spurless hammer and the cylinder arbor pin retain their original polished bright, “in the white” finish. The spring-loaded safety is present on the left side of the frame, and works exactly as it should. These safeties are often broken and missing. The original arbor latch spring is present and works exactly as it should as well. Both of these parts retain about 90% of their original bright fire blued finish as well. The original dovetail mounted front sight is present and in wonderful condition as well. The butt of the pistol has a compartment to retain spare parts, and two original spare cones (nipples) are retained inside the butt trap. The cones are in new and unused condition, and retain their original brass spacers as well. The revolver is mechanically EXCELLENT and functions exactly as it should. The revolver times, indexes, and locks up exactly as it should. The checkered walnut grips are in equally EXCELLENT condition and match the condition of the revolver perfectly. The grips are solid and complete with no cracks or chips. They retain crisp and sharp checkering, and show only the most minor handling marks and a couple of very tiny dings.

Overall the gun has an incredible visual presence and displays exceptionally well. This wonderful and rare large caliber Adams would be an outstanding addition to any advanced collection of Civil War era or English percussion revolvers. This is a very scarce gun that is rarely found for sale, especially in this condition, and it would surely make a wonderful centerpiece to any percussion revolver collection, where its size alone would allow it to dominate the other guns in the display.The fact that this gun has been published in the most comprehensive book about Confederate arms and equipment purchased from England only enhances its value, as documented and published guns are always in demand. You can find large pictures and this gun discussed in some detail on pages 218-219 of The English Connection.