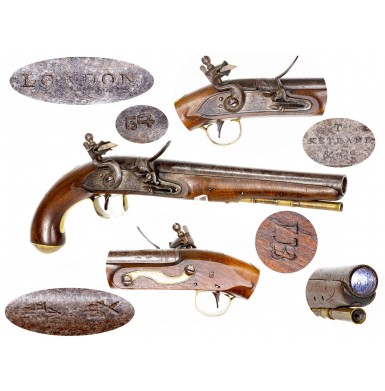 By the time the War of 1812 erupted in North America, the British Empire had been in a nearly constant state of war since 1793; only a decade after the conclusion of the American Revolution. The American Revolution had been a nearly global conflict for the British, as they found themselves fighting France, Holland and Spain simultaneously during much of the conflict, as well as fighting the Kingdom Mysore on the Indian sub-continent. As war with France erupted again in 1793, a two-decade series of wars began for the English that again involved much of the globe and nearly all of Europe at one time or another. The conclusion of the French Revolutionary Wars (1793-1802) only resulted in a very brief peace and by the following year England was at war with France again, this time in a conflict with Napoleon that would embroil Great Britain for more than a decade. The constant state of war taxed the British Board of Ordnance, making it difficult to supply their armies in the field with the necessary arms, accoutrements and supplies. The British also felt the additional pressure of having to help supply many of their allies with arms, as well as to maintain the readiness of their provincial forces in holdings like Canada.

The end result of the extreme pressure on the Board of Ordnance and their suppliers in the London and Birmingham gun trades meant that in many cases corners had to be cut. The most obvious one was the adoption of the India Pattern Musket in 1793, a simpler and cheaper to produce variant of the venerable “Brown Bess” for general issue to all troops. This brought to an end the production of the elegant “Long Land” and “Short Land” patterns of British infantry muskets and preempted the adoption of the “New Land Musket” in 1802, as war with France started again. In modern military terminology the “India Pattern” musket would initially be considered a “substitute standard”, a lower quality weapon that would still get the job done. By the end of the Napoleonic Wars, this lower quality arm was the standard.

This same pressure to find acceptable, if lower quality and cheaper replacements, applied to all areas of firearms production, including cavalry pistols. By the time the War of 1812 began, the British ordnance supply system was stressed to its limit. The new conflict on the North American continent meant that more arms and equipment had to be provided to the Canadian militia. As American forces moved to invade British Canada, the requests for small arms from the Canadians only increased. In order to supply the Canadian militia with the needed pistols, the Board of Ordnance turned to their typical London and Birmingham suppliers, but this time accepted a lower quality and simplified version of the cavalry and dragoon pistols then in service with the British Army.

The guns at first glance look more like the English trade pistols from the end of the 18th and beginning of the 19th century and in many ways that is essentially what they are. The guns are typically 16-Bore, considered “carbine bore” (nominally .65-.67 caliber) pistols with inexpensive commercial locks, pinned barrels that vary in length between about 9” and 9 ½”, simple brass furniture and a much lower level of fit and finish that would typically be acceptable in any British military firearm. The guns were nominally about 15” in overall length and other than the British military proof and acceptance marks on the barrels and the occasional storekeepers’ mark in the wood are almost indistinguishable from the trade guns of the era. Some references refer to these as Pattern 1813 Indian Pistols, a pattern adopted by the East India Company for the use of their private army. Between 1814 and 1815 it is likely that between a few hundred and a couple thousand of these guns were produced for use by the Canadian militia. Regular Board of Ordnance contractors delivered the guns. Known contracts include Ketland & Walker who delivered 270 pistols during this period. Other contractors of Canadian militia pistols included Thomas Lowndes who delivered 125 during the 1814-1815 period and Morris & Company (Morris & Grice) who delivered 184 during the same timeframe. Today surviving examples of these guns are rather scarce. Between the fact that the guns were not made to the same level of quality as many British military arms of the period and their deployment in the wilds of North America, most of the guns saw hard use that made their survival to be part of collections today unlikely.

Offered here is a scarce War of 1812 Period Canadian Militia Cavalry Pistol by Ketland & Company. The gun is equipped with a commercial lock that is marked T. / KETLAND / & Co in three lines underneath the pan. The lock has simple commercial engraving with a boarder-line around the plate and a small foliate design to the rear of the cock. The same design decorates the lower portion of the flat, faceted, swan-necked cock. The integral rounded iron pan is unbridled, as is typical of these inexpensive contract pistols. The same foliate design found on the lock and the cock is found on the breech plug tang and at the breech of the barrel. The barrel is marked LONDON in a single line, which is typical of many Ketland arms. The identifying marks that allow us to know this is one of the Board of Ordnance Canadian contract pistols are the set of British military proof marks on the breech and the Board of Ordnance inspection at the touchhole. The upper left quadrant of the breech has a {CROWN}/GR/{BROAD ARROW} inspection followed by a {CROWN}/{CROSSED SCEPTERS} proof. The touchhole is marked with a {CROWN}/12 inspection. A block IB stamp is present on the counterpane, opposite the lock and could be the mark of the setter-up who assembled the gun, or even the contractor who delivered the gun to the Board of Ordnance. Not all of militia pistol contracts are known, and this gun may have been produced by a maker using a Ketland lock or by Ketland. It could have been part of the Ketland & Walker contract or from a contract directly with Thomas Ketland.

Thomas Ketland had entered the gunmaking business in Birmingham circa 1766 working on his own through 1787 according to period directories, with his last address on Weaman’s Row. He then disappears from the directories and reappears in 1799 as a partner in the firm of Ketland & Walker, again on Weaman’s Row working with Walter Walker. During the period of 1799-1812 Ketland & Walker was one of the largest contractors to the English Board of Ordnance, supplying the British military with complete arms, as well as working as “rough stockers”, “setters up” and “lock makers”.  During roughly this same time period Thomas Ketland is shown as working on his own at 2 Weaman’s Row from 1804-1816. It is not clear if this gun represents one of the 270 pistols ordered from Ketland & Walker, was a separate Thomas Ketland contract gun or was potentially produced by “IB” using a Ketland lock. What is clear is that this is a British military procured and inspected pistol, rather than just a simple trade or India pattern pistol.

The pistol remains in about VERY GOOD condition overall. It measures about 15” in overall length with 9 ¼” pinned round barrel and a nominally .66 caliber (16-Bore) smooth bore. The brass furniture consists of a simple brass buttcap, triggerguard, an oval wrist escutcheon, a flat S-shaped “New Land” style side plate and round ramrod thimble and entry pipe. The tail of the buttcap, triggerguard bow and triggerguard finial are lightly engraved with simple foliate patterns. The pistol has the assembly mating mark \ / | | | on the upper edge of the lock, inside the lock mortise and on the necks of both lock screws. The barrel was not removed from the stock to look for mating marks because doing so might damage the wood around the pins. Other than the ramrod, which is a later replacement, the pistol appears to be 100% complete, correct and original to the period of production. The lock remains in its original flintlock configuration and retains its original cock. The lock functions as it should on all positions. The bore of the pistol is heavily oxidized and is dark and dirty with scattered moderate pitting. A good scrubbing might improve the condition of the bore somewhat, but in its current condition, only rates about FAIR. The barrel has a moderately oxidized brownish gray patina with surface roughness here and there and some scattered pinpricking and light pitting. There are a couple of patches of more moderate surface roughness scattered along the barrel as well. The markings on the barrel remain mostly clear and legible. The lock has a similarly oxidized brownish-gray patina with clear markings and some scattered pitting. The pan shows moderate pitting and wear and frizzen shows scuffs and wear as well. The brass furniture was cleaned at some point in time and is starting to tone down to a medium golden patina. The stock is solid and full-length and remains in VERY GOOD condition with the only real condition issue being several small cracks at the lower rear and rear of the lock mortise. These are relatively minor and do not seem to be overly structural, but the gun should be handled carefully to avoid chipping or damaging the cracked areas further. Otherwise the stock is solid and full-length and is free of any breaks or repairs. The stock shows some scattered bumps, dings and mars as would be expected. It retains nice edges and lines and although it was likely cleaned at some point in time, does not appear to have been sanded. A brass-tipped wooden ramrod of indeterminate age is in the channel under the barrel. The ramrod is oversized and was trimmed to fit in length and taper and is tightly stuck in the channel requiring excessive force for removal. The rod can only be removed by first removing the front lock mounting screw, which passes through the ramrod channel and is itself relieved to allow a rammer to pass. The brass tip of the rod has a nice patina and shows some minor dings and tool marks from attempted removal.

Overall, this is a nice, solid example of a rather scarce War of 1812 Period Canadian Militia Cavalry Pistol. While it is not completely certain how many of these guns were contracted for, I would appear that between 750 and 1,500 were likely procured. The pistol has a lovely appearance and other than the ramrod is completely original and correct. This would be a nice addition to any collection of Canadian arms, secondary British military arms or a War of 1812 grouping. Pistols from this period are not common and this is a nice example of one of the “stop-gap” pistols acquired by the Board of Ordnance to supply the Canadian militia during the War of 1812.