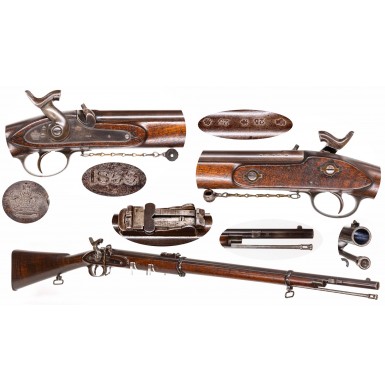 In November of 1857 the British Navy adopted a brass mounted, heavier barreled version of the Pattern 1856 short rifle that was rifled with 5 narrow, progressive depth grooves and a faster 1:48” rate of twist. These rifles went into production in 1858 and were designated the Pattern 1858 Naval Rifle. The new rifling proved substantially superior to the slower 3-groove rifling of the Pattern 1856 rifle, and in November of 1860 the Board of Ordnance officially adopted the new Pattern 1860 Short Rifle. This rifle was externally identical to the earlier Pattern 1856 but utilized a heavier barrel, and the Pattern 1858 Naval Rifle’s 5-groove, 1:48” progressive depth rifling. These new pattern short rifles went into production for British military service in 1861, but by that summer were officially replaced by the new Pattern 1861 Rifle, which was essentially an upgraded Pattern 1860 with the new Baddeley Patent barrel bands and a new 1,250-yard rear sight. Despite what the official military pattern may have been, commercial versions of the Pattern 1856 and Pattern 1860 rifles remained in production through the mid-1860s, often mounted in brass and often sold to the combatants involved in the American Civil War.

During the course of the American Civil War the Enfield pattern “short rifle” was an extremely popular long arm that was imported by both sides. It appears that the majority of the 9,440 “Short Enfields” purchased by the US Government were the standard, iron mounted Pattern 1856 rifles, as adopted by the British Board of Ordnance. Some additional 4,071 Pattern 1856 rifles were also purchased directly by the State of New York. The Confederacy purchased a much larger number of the “Short Enfields” including not only the Pattern 1856 rifle, but also the Pattern 1856 No 2 or “Bar on Band” Rifle, the Pattern 1858 Naval Rifle, and the Pattern 1860 and 1861 Rifles. One contract with Sinclair, Hamilton & Company was for 10,000 “short rifles”. These were the guns that were numbered and marked with the JS/Anchor mark. While Concrete totals for CS importation of Enfield pattern arms are not available, most scholars place the total somewhere around 400,000 Enfields of all patterns, give or take as many as 100,000 arms. It appears that the number of Enfield rifles purchased was significantly lower than the number of rifle muskets, with a ratio of somewhere between 1:3 or 1:4; 1 short rifle for every 3 or 4 rifle muskets purchased. The Confederacy did not limit themselves to guns that strictly conformed to British Ordnance Department specifications. Examples of Confederate imported Pattern 1856, Pattern 1856 No 2 “Bar on Band”, Pattern 1860 and Pattern 1861 rifles exist, which are mounted with brass hardware instead of the British military specified iron mountings. In fact, the rifle carried by Sergeant Richard Kirkland of the 2ndSouth Carolina Infantry, better known to history as the “Angel of Marye’s Height”, was a JS/Anchor marked, brass mounted, “Bar on Band” rifle with the number 2370 engraved on the buttplate. This gun is on display in Columbia, SC at the South Carolina Relic Room & Military Museum.

For years, these non-standard, brass mounted arms have been referred to by most collectors and dealers as “commercial” guns, indicating that they were not arms produced to British Ordnance Department specifications, and destined for sale to customers who were not the British Military. However, I believe that these guns were often referred to by the Confederacy as 2nd Quality arms. Throughout the receipts and invoices for Confederate arms purchases found in the McRae Papersare numerous references to arms as “1st Quality”, “2nd Quality” and “2nd Hand”. Obviously, the reference to “2ndHand” refers to older arms in used condition, like the obsolete Pattern 1839, Pattern 1842 and Pattern 1851 muskets that were purchased by the Confederacy. “1st Quality” arms were clearly those that were up to British Ordnance Department standards and would have been accepted for British military service. I believe the “2nd Quality” arms were those arms that were not manufactured to British Ordnance Department specifications, such as the brass mounted variants of arms that were normally iron mounted.

This Iron Mounted Pattern 1856 Enfield “Short Rifle” is in my opinion a classic example of what the Confederacy would have called a “1st Quality” arm. The gun is a standard Pattern 1856 Rifle in all ways, and the rifle conforms to the usual British Board of Ordnance Pattern 1856 specifications. The rifle has a .577 caliber 33” barrel rifled with 3-groove progressive depth rifling with the standard 1:72” slow twist and is mounted with a lug to accept a saber bayonet. The usual 1,100-yard rifle rear sight is utilized, and the lower sling swivel is screwed into the toe of the stock at the tail of the extended triggerguard plate, instead of being installed on the triggerguard. All of these were standard features for a Pattern 1856 rifle. The gun was clearly intended for “commercial sale” and bears the usual Birmingham commercial proofs on the left breech of the barrel, interspersed by a pair of 25 gauge marks, to indicate .577 caliber. The lock is marked with the usual British {CROWN} to the rear of the hammer, without a “VR” to indicate British government ownership underneath and is dated 1859 forward of the hammer. As would be expected on a commercial gun, that was likely to be sold private or exported, the gun has no British military ownership marks of any sort. The rifle is not maker marked externally, but as is so often the case disassembly reveals some of the various Birmingham contractors involved in producing the parts that went into the gun and in this case suggests who the maker may have been. The interior of the lock of this rifle is marked only with the number 2 forward of the mainspring and on the inner face of the hammer neck. No maker’s marks are present in the lock. The top edge of the lock is marked with the assembly mating mark XI. These marks are typically just file slash mating marks and not truly Roman numerals, although occasionally they are and are used interchangeably with Arabic marks on other parts. The bottom of the barrel is marked with the matching mating number 6 on both the breech and the breech plug, which are simply mating marks for those two parts. The barrel is additionally marked with the XI mark that matches the edge of the lock plate and a variety of other marks. The initials JDand C.R. & CO, as well as the name EZRA MILWARD are clearly stamped into the bottom of the barrel. Millward was a major Birmingham barrel maker. The initials JD are likely that of a workman, possibly one of Millward’s workers or possibly that of the “setter up” who assembled the component parts of the gun. The mark C.R. & Co is probably that of the master contractor who delivered the gun. More than likely it is the mark of Charles Reeves, one of the larger of the Birmingham contractors who was in business as a gunmaker from 1854-1885. Reeves was a large and diverse manufacturer who also produced revolvers (which was a very specialized skill), edged weapons and “plantation and heavy edge tools”. He also pioneered the production of metal tubing during the latter part of the 1860s. During his lifetime he received no less than ten British firearms related patents, including one for a revolver mechanism and several for breechloading designs including percussion arms and what was likely a needle fire gun. Small parts on the gun also bear some maker marks. The lug for the rear sling swivel is marked R&WA for R & W Aston and the ramrod spoon in the stock is marked T&CG for Thomas & Charles Goodman. The bayonet lug is marked with the Arabic mating numeral 12, to match it to the bayonet that fit on the lug. Most of the other parts of the gun also bear the XI matching mark. It is found in the ramrod channel of the stock, on the interior right rear of both barrel bands, on the breech plug tang screw and on one of the two lock mounting screws, with the other screw unmarked.

The rifle remains in about VERY GOOD+ to NEAR FINE condition overall. The rifle appears original and correct in all respects. The metal surfaces of the gun are mostly smooth, with some traces of the original blued finish remaining on the exterior of the barrel, mixed with a lovely, oxidized plum-brown patina. The blue has faded, thinned, and oxidized and has blended with the plum brown giving the gun an attractive appearance that makes it appear to retain some nice original finish, which it does not. However, the bottom of the barrel, where it has been protected by the stock, retains about 60%+ of its original blued finish, which is thinning. There are some tiny patches of scattered light oxidized freckling along the entire length of the barrel and there is some more moderate pinpricking and light pitting present around the breech and bolster of the rifle, the result of percussion cap flash. The bore of the rifle rates about VERY GOOD+. The rifling remains strong and crisp along the entire length of the bore. The bore is mostly bright with some darker patches present, and shows some areas of light pitting, most of which is closer to the muzzle. The lock of the rifle is mechanically excellent and functions well on all positions, with a strong mainspring and crisp engagement between the sear and tumbler. The lock retains strong traces of the original color casehardened finish, possibly as much as 5% of its original finish in protected areas. The balance of the lock has faded to mottled plum tones and matches the barrel very well. The lock is mechanically excellent and functions crisply and correctly on all positions. The rifle retains its correct and original long-range rear sight that is graduated to 1,100 yards, and the original front sight. The original saber bayonet lug is in place on the barrel and is numbered 12 to match it to saber bayonet that fit the rifle. Both sling swivels remain in place as well. The upper swivel is attached to the upper barrel band and the lower one is screwed into the toe of the stock. Even an original snap cap is in place on its brass chain, secured to the stock with the original iron split ring. These metal and leather “nipple protectors” allowed the solider to “dry fire” his weapon without damaging the cone (nipple). These little accessories were included with every rifle and musket but are rarely found with the guns today. This one is in good condition, with only some of the leather padding missing. An original and correct Enfield Short Rifle ramrod is in place in the ramrod channel under the barrel. The iron mountings of the rifle have oxidized to a mostly plum brown patina, with the bands somewhat lighter than the triggerguard and buttplate. All the iron furniture matches the balance of the rifle very well. The stock of the rifle is in about VERY GOOD+ to NEAR FINE condition. The stock is full length and free of any breaks, or repairs. The stock retains fairly crisp edges but may have been very lightly sanded as some point in time. It also shows the addition of some old finish, possibly a small amount of dark stain as well as some oil.  As would be expected the stock shows numerous small bumps, dings, and minor impact marks, all likely the result of actual use in the field.

Overall, this is a very attractive example of what a Commercial Pattern 1856 Enfield “Short Rifle”. It is impossible to know where this gun was delivered or what it did during its period of use, but it is not impossible that it was an early Confederate speculative purchase. The gun is in really lovely condition. Enfield short rifles are three to four times less common than the Pattern 1853 rifle muskets and are often missing from Civil War long arms collections. This is a nice complete, and crisp example that would simply look great in your Civil War long arms collection, and for a very fair price.