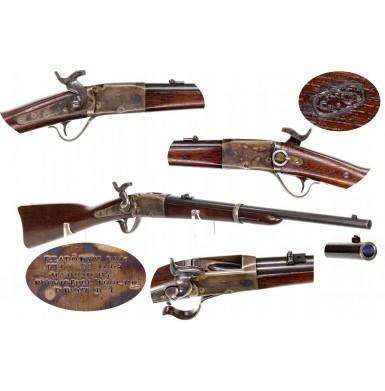 On 22 July 1862 Henry O. Peabody (1826-1901) received his first US Patent, #35,947, which was for a breechloading firearm design. Although Peabody was not a firearms inventor per se, the United States was in the midst of the American Civil War at that time and Peabody almost certainly was hoping that his new design would win an Ordnance Department contract to help support the Union war effort. Interestingly, during the rest of his life he would only receive one other firearms patent, #76,805 on 14 April 1868, which was for an improvement to his original firearms patent. During the course of his life, Peabody would receive a number of other US Patents, including #97,684 (1869) for Improvements in Centrifugal Machines for Extracting Honey from the Comb, #127,187 (1872) for Improvements in Knives for Un-Capping the Cells in Honey-Combs, and at least three different patents during 1885 and 1886 (#320,279, #325,269 and #351,462) for a Fertilizer Distributor. Today Peabody is only remembered as a footnote in firearms history, despite the importance of his design, but Massachusetts residents remember him for the philanthropic trust that bears his name. The Henry O. Peabody Trust established the Henry O. Peabody School for Girls in Norwood, MA in 1940, which provided education to young women until its closure in 1989. Today, the trust still offers renewable scholarships in amounts ranging from $1,000 to $5,000 to students from Norfolk County, MA who are pursuing a college education. The trust’s original funding was mostly derived from the royalties earned from the production of Peabody’s rifle design.

Peabody’s design was for a metallic cartridge, single shot breechloader with an external hammer. The action of the rifle was operated by lowering a combination triggerguard and operating lever. Lowering the lever tilted the breechblock down, exposing the chamber for loading. The top of the block was grooved to ease the loading of the cartridge. Closing the lever raised the breechblock and sealed the action. The rifle was then made ready to fire by cocking the hammer. After firing, the lever was lowered again, which actuated the extractor and withdrew the fired cartridge casing from the chamber and made the rifle ready to be loaded again. The design ticked off many of the check boxes that future breechloading designs would hope to achieve in that it was a compact, simple and strong action that was readily adaptable to multiple calibers and ignition systems. It was also easily adapted to assembly line manufacturing techniques with interchangeable parts. Despite all of these design advantages, the system generated limited interest initially. Peabody sold the rights to manufacture firearms based upon his patents to the Providence Tool Company of Providence, RI in 1862, the same year that it was registered, but nothing would really come of the design until the end of the Civil War.

The Providence Tool Company was quite busy filling contracts for US Model 1861 Rifle Muskets during in 1862, and despite some experimental work with Peabody’s design, they simply had neither the time or manpower to capitalize on it. A carbine design based upon Peabody’s patent was entered in the 1864 US Ordnance Department Carbine Trials. According to Norm Flayderman, six were produced at Springfield Arsenal for trial purposes and were received positively, but no contract was forthcoming. The design was entered in subsequent trials in 1865 and 1867 as well, but despite receiving high marks for overall design, ease of use, speed of operation, reliability and accuracy, the Peabody was essentially overlooked. It has been implied by several gun writers and researchers that the political clout of the Remington Arms Company helped to push the Peabody design to the side, making way for Remington’s own Rolling Block system. Failing to receive acceptance by the US military and to win a contract, Providence Tool started to look for other potential markets for the Peabody design.

From 1866 to 1871 the Providence Tool Company would produce roughly 112,000 33” barreled rifles and 20” barreled carbines based upon the Peabody design. The guns would be offered in a variety of calibers ranging from 50 Rimfire (really .50RF Gov’t – the first officially adopted universal metallic cartridge for the US military) to .45-70, .50-70 and .43 Spanish (.433 or 11mm) to name a few. The first big sales opportunity came in July of 1870 when the French ordered thousands of the Peabody Carbines in .50RF as well as thousands of the full-length military rifles in .43 Spanish for the Franco-Prussian Warr. Unfortunately for the Providence Tool Company, the war ended abruptly in January of 1871. This left thousands of undelivered, and unpaid for, Peabody carbines and rifles in the company’s inventory. In the immediate wake of this potential financial disaster, the company managed to sell 2,000 of the .43 Spanish military rifles to the state of Connecticut during 1871-1872, another 2,941 to Massachusetts in 1872 and 350 of the .50RF Carbines to South Carolina in 1877. During the next few years, some of the .43 Spanish military rifles were also sold off to other foreign powers, including the Spanish who acquired 10,000, Mexico who acquired 8,500 and France who eventually took delivery of 33,000.

However, it would take the work of another inventor and the adoption of the action system by the British military to overcome the lackluster success of Peabody’s action, eventually making the Peabody design one of the most successful single shot actions ever designed. The most significant shortcoming in Peabody’s design from a military standpoint was the external hammer. Although Peabody developed a hammerless variant of his action that used an internal spring-loaded striker to fire the cartridge, rather than the external hammer hitting a firing pin, he does not appear to have patented the system, as no record is found in the US Patent search it was certainly not patented in Europe. There, Swiss inventor Friedrich von Martini modified the Peabody design by making it a hammerless, striker fired action. The new Peabody-Martini action was adopted by the British military in 1871 in a design that utilized Scottish gunmaker Alexander Henry’s polygonal rifling system. The resulting Peabody-Martini-Henry rifle became known simply as the Martini-Henry and with the dropping of Peabody’s name from the action that he conceived of, in many ways his name dropped out of firearms history. However, the new design was a godsend for the Providence Tool Company.

Offered here is one of the early production Providence Tool Company Peabody Military Carbines that was likely manufactured circa 1870 for Franco-Prussian War service. The gun is in the standard military configuration with a 20” round barrel secured by a single barrel band, a sling ring secured to the left side of the receiver and is chambered for the .50RF cartridge. The gun has the standard military leaf rear sight which has a 100-yard notch and two apertures in the leaf for 300 and 600 yards respectively. The front sight is of the musket style with a base and blade and is the same type used on the US Model 1861 Rifle Muskets produced by Providence Tool during the Civil War. The finish is the standard finish for the Peabody models with a blued barrel, color casehardened receiver, hammer, lever, barrel band and buttplate and a two-piece straight-gripped walnut stock with a carbine butt and a smooth forend. The reverse of the receiver is marked in five lines with the address and patent information and reads:

The carbine remains in about VERY FINE condition overall and were it not for some minor dulling of the case colors and some thinning of the blue, it would easily rate excellent. The receiver, hammer and lever all retain about 93%+ color casehardening coverage, which remains about 85%+ vivid and is really stunning. The most obvious area of fading and dulling is the top of the receiver. The buttplate retains a similar amount of coverage but has faded and dulled on the bottom, rating about 80%+ vivid. The barrel band retains traces of case color and has faded to a dull, mottled pewter gray appearance. The receiver retains clear, crisp marking and is almost entirely smooth, with only a few scattered freckles of surface oxidation and minor roughness, along with a couple of tiny areas of minor pinprick etching. The barrel retains about 90%+ original blue with some thinning and fading, giving the blue a slightly streaky appearance under strong light, which also reveals some freckles of surface oxidation shot through the finish. The carbine is mechanically excellent and functions correctly in all respected with a crisp, tight action. The carbine retains its original leaf rear sight, front sight and saddle ring. The bore of the carbine is in VERY FINE condition as well. It remains mostly bright with extremely crisp rifling and only some lightly scattered oxidized freckling and some light frosting in the grooves. The stock and forend remain very crisp and retain some of their feathery texture from original production. The wood retains sharp edges and has never been sanded. The only condition issues worth noting are a couple of minor areas of surface wood that has “flaked” off. The first area of minor surface chipping is at the rear of the lock plate that is the result of improper lock removal. The other area is a small surface flake missing at the top of the wrist behind the receiver. This second area is almost impossible to see but can be felt if you run your finger along the upper edge of the wrist. Otherwise, the only condition issues worth noting are a handful of scattered minor bumps, dings and mars on the stock and forend. A deep script WC cartouche is present on the reverse wrist and remains very crisp.