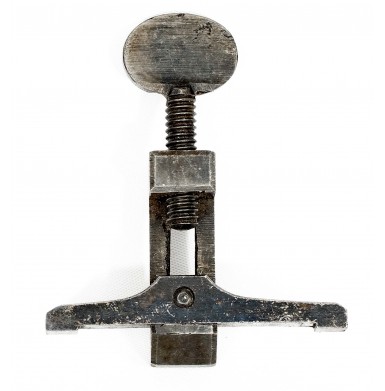 This is a FINE condition example of the US Model 1855 Mainspring Vise. The vise was adopted with the US Model 1855 rifle and rifle musket, and remained in use through the US Models of 1861, and the 1861 Special Model Rifle Musket, as well as the US Rifle Musket Models of  1863 and 1864 of the Civil War era, as well as most of the Allin conversions and “Trapdoor” alterations, and into the first issuances of the Model 1873 Trapdoor rifle. The tool was finally made obsolete by the adoption of the M1879 combination tool for the use with the Trapdoor series of long arms.

The vise has slightly offset jaws and a large thumbscrew, which allow a mainspring to be compressed for removal or insertion in a rifle, musket or carbine lock. The tool retains about 70%+ of its original dull blue-black arsenal finish. The tool is unmarked, as were most of these spring vises. The general belief is that US military gun tools from the mid-19thcentury that are “US” marked, were products of the Harpers Ferry Arsenal. Unmarked tools were produced at Springfield as well as by a myriad of contractors during the Civil War era.

The tool remains fully functional and operates smoothly and correctly in every way. This would be a nice addition to any display of Civil War era gun tools, or as a functional tool for use when working on your Civil War era rifles and muskets.

Please note that the images below are much larger than the actual tool. This allows you to see condition and details easily. The overall length of the main body of the tool is about 3” with the thumbscrew fully extended and the pivoting cross piece is 2 3/8” wide.