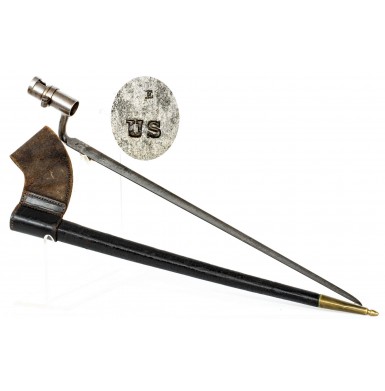 This is a VERY GOOD condition example of the US Model 1835/40 Socket Bayonet in a nice and complete US Pattern 1851 Bayonet Scabbard. The US M-1835/40 socket bayonet was the first US socket bayonet to incorporate a locking ring to ensure that it remained firmly attached to the gun it was fixed upon. All of the earlier standard issue pattern US socket bayonets relied upon a friction fit and variations is a multi-step mortise cut to keep the bayonet and the musket securely joined to each other. The bayonet was an almost direct copy of the French Model 1822 socket bayonet. The bayonet was designed for what would be the last of the US flintlock muskets, the US Model 1835/40 and continued in use through the production run of the first US percussion musket with interchangeable parts, the Model 1842. The M-1835/40 bayonet remained in production until the end of Model 1842 musket production in 1855. The bayonet featured an 18” blade, with the squared off shoulders that were typical of the earlier 1816/22/27 series of socket bayonets. The socket was mortised for a bottom stud and was sized for US .69 musket barrels. The US Pattern 1851 socket bayonet scabbard replaced the earlier US Pattern 1839 scabbard that had originally be issued with the earliest production M1835/40 bayonets. The 1839 scabbard had a brass mounted leather body with a frog hook near the throat that allowed it to be secured to a hole and loop in the infantry cross-belt baldric. The Pattern 1851 scabbard replaced with the frog hook system with an attached belt loop that allowed the scabbard to be worn on the waist belt, eliminating the need for one of the cross belts. The leather scabbard body had a wraparound leather throat that was sewn to the belt frog with no reinforcing rivets. The belt loop piece was made of blackened buff leather, rather than blackened bridle leather was used in the balance of scabbard’s construction. A brass finial was attached to the end of the leather scabbard body and was secured by two copper or brass pins on the reverse. The scabbard would continue in use unchanged through 1859, when an updated version of the scabbard was adopted, which reinforced the belt loop with two copper rivets. It also changed the belt loop from blackened buff leather to blackened bridle leather. The new Pattern 1859 scabbard would be the standard US socket bayonet scabbard through the first half of the American Civil War.

This bayonet and scabbard set remain in VERY GOOD condition.  This bayonet has a very clear, and deep US stamp on the face, with a much smaller E inspection stamp above it. Research by Fred Gaede has allowed us to know that this is a Harpers Ferry inspection mark, that was used for a short period of time, along with several other inspection letters. The bayonet’s blade is full-length. The blade has a mostly smooth, light dull gray patina with scattered oxidized freckling and age discoloration along the entire blade, giving it a mottled brownish-gray appearance. There is some lightly distributed pinpricking on the blade and some more moderate pinpricking on the socket. The original locking ring is in place on the socket and remains complete and fully functional. The scabbard remains in VERY GOOD condition as well. The scabbard shows some scattered moderate crazing and some flaked finish loss, but the leather remains solid and most of the finish remains in place. The stitching appears to be all original and is mostly quite tight, with only a couple of small areas that show minor pulls or hints of any looseness. The blackened buff belt frog has faded slightly and has a nice contrasting appearance to the black bridle leather of the scabbard body. The interior of the belt frog remains white buff as it should be. A correct pattern two-pin brass finial is in place at the end of the scabbard. It may be original or a very old, possibly period of use, replacement. The only hint that it could be replaced is that the small pins on the reverse are slightly larger copper pins than are normally encountered, suggesting a very old, almost certainly period, repair. The inability of the two small pins to retain the final tips of the scabbards in the field would not be addressed with the new Pattern 1859 scabbard, but would be with the February of 1863 pattern scabbard, which included two extra pins in the design that entered from the front of the finial. The scabbard remains quite solid and quite usable for display or mounting on an infantry accouterment belt.

Overall this is a solid example of a nicely patinaed US M1835/40 Socket Bayonet with a very nice US Pattern 1851 Bayonet Scabbard. These very rare, pre-Civil War scabbards were replaced by the Pattern 1859 scabbard, but as many were already in the field and in various US arsenals, they certainly saw use during the early part of the Civil War. Finding a solid example of a Pattern 1851 “sewn only” scabbard is difficult, and this would be a wonderful addition to any pre-Civil War and Civil War era accouterment collection. This set would be a fine addition to the display of your US Model 1842 Musket or M1835/40 percussion conversion musket. Don’t miss your chance to get this very scarce scabbard with the correct pattern bayonet and add it to your collection.