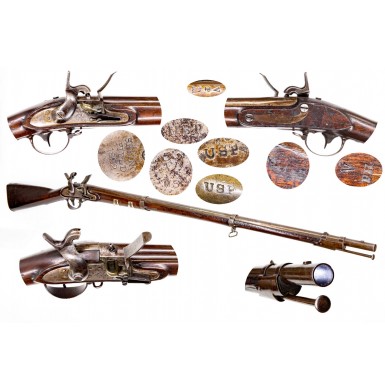 I have always had an affinity for odd and rare US Model 1816 percussion conversion variations, and clearly, this one is about as odd as you can get in. It features the typical US arsenal Belgian or cone-in-barrel conversion system, but it retains all of the original external flintlock battery, including the pan, frizzen, frizzen spring and mounting screws. Only the actual flintlock hammer has been changed on the lock system. That is not the most unique part of this conversion. The really interesting part is that all of the external lock components, with the exception of the percussion hammer, are marked USP for United States Pattern.

The meaning of this rarely encountered mark can be traced to the early 1820s, when the Ordnance Department began to evaluate the US Model 1816 building project and analyzed the quality and consistency of the guns being delivered by the national armories at Springfield and Harper’s Ferry as well as the various contractors producing the model. What was discovered was that although the goal of the M1816 project was to produce guns that were as close to identical as reasonably possible with the production methods currently available, the reality was that the guns were far from consistent and that even simple items like bayonets would not interchange between muskets. As a result, in 1822 the Ordnance Department ordered that Springfield Armory and Harper’s Ferry each build 30 Pattern Muskets along with the necessary gauges to check the various components and finished muskets for distribution as patterns to be used by contractors and the arsenals themselves. This renewed effort to produce muskets with truly consistent dimensions was aimed at making the majority of the major components manufactured at any single armory or factory relatively, if not completely, interchangeable. Interestingly, the goal was not to make all of the arms fully interchangeable between manufacturers, but as close to interchangeable as possible from any single maker.

This newly standardized pattern has come to be referred to by collectors as the US Model 1816 Type II flintlock musket and in period documentation as the US Model 1822 flintlock musket. The pattern guns were not to receive any special consideration in terms of fit and finish but were simply to be as consistent as possible within the limitations of the current armory manufacturing capabilities. The 30 pattern guns produced as Harper’s Ferry were supposed to be marked with an Eaglehead and an S on every part and were stamped MODEL on the barrel in front of the breech. The 30 pattern guns produced as Springfield Armory were supposed to be marked in the same way, but the order was received too late, and the pattern guns were instead marked with USP on all parts large enough to receive the marking, and were stamped only with a P on the parts not large enough, such as screw heads. According to collector, researcher and author Peter Schmidt, only one complete Springfield Armory US M1822 Pattern Musket is currently known to exist in complete and original form.

This very unique percussion conversion musket is equipped with one of the 30 exceedingly rare Springfield Armory pattern locks. The exterior of the lock plate, the underside of the flash pan and top angle of the frizzen are all marked with the requisite USP and the heads of the external lock screws are marked with a P. The balance of the musket parts, including the stock, are almost all stamped with the matching assembly number 8. This number appears on nearly every part, including the band springs and the heads of most of the screws. What is interesting is that this “sample” number may well have been a later addition as part of the sample or pattern system, since the numbers are larger and more prominent than the standard assembly numbers used at the time at either armory. Also, the barrel bands and band springs are all numbered 4 in the more traditional armory style font and locations, so each of these parts bears both numbers; “4” and “8”. The really interesting thing is that the entire gun, aside from the lock, appears to have been manufactured at Harpers Ferry! This can be determined because barrel has the Harpers Ferry style proof marks (V / P / Eagle Head instead of Springfield’s P / Eagle Head / V) of the period and the stock bears the block letter mark V / PH at the tail of the flat. This is the mark of Harper’s Ferry Armory sub-inspector Phillip Hoffman, who inspected Harpers Ferry arms in the 1820s and 1830s. When I first examined this gun several years ago, I thought that this strange combination of parts was somewhat easy to understand, as sample muskets were sent indiscriminately to the various armories and contractors. Thus, it was completely possible that any one of them would receive a mix of Springfield and Harper’s Ferry sample muskets. In the process of assembling and checking muskets against the pattern guns, the pattern guns were inevitably dismantled on a regular basis. In fact, the Ordnance Department specifically mentioned avoiding too much attention being paid to the quality of the browned finish on the pattern guns, as the finish was likely to be ruined quite quickly due to excessive dismantling while being used as a pattern. Since one of the goals of the project was to create parts that were reasonably interchangeable, it is not beyond comprehension that the lock from one gun could end up in the stock from another. This point is further driven home by a letter to the Ordnance Department in 1830, where additional pattern muskets are being requested, as the ones currently in use at the armories and by the contractors had been so often disassembled, were so worn, and so used as to be no longer satisfactory for the purpose of being pattern guns. In fact, this gun’s frizzen shows a significant amount of period wear and use, indicating that the pattern guns, or at least this particular one, were actually fired quite a bit. More than likely, as the pattern arms became worn to the point that they were no longer useful as pattern arms, they were simply returned to inventory. This would explain the classification cartouche from the 1840s flintlock arms inspection located on the stock flat, rating the gun as a 2 or “second class” arm. More than likely when the conversion process started the gun was converted to percussion per order, but since it had pattern lock parts, the parts were retained in case they would be needed at a future date for any reason. However, more recently it occurred to me that Springfield may have produced all of the pattern locks during this period when the first pattern guns were produced. Springfield was usually the source for all pattern arms during the mid-19th century as the Harpers Ferry armory was not considered to be capable of making the same quality of arms as Springfield was. The pan of the lock of this gun is numbered 8 on its interior, making it sample lock “8”. I now believe that that lock was forwarded to Harpers Ferry for use, where it was installed in gun that was made to be a pattern musket and the gun was subsequently re-numbered “8” to match the lock.

Overall this rare and interesting “flint-cussion” musket is in NEAR FINE condition. The lock is well marked in three vertical lines behind the hammer: SPRING / FIELD / 1822. With 1822 being the correct date for a pattern musket of that model. The lock is marked USP / {Spread-Winged Eagle} / US forward of the hammer and the pan and frizzen are marked USP as previously mentioned. Internally the lock has a V on nearly every part, marks that are also present on the frizzen and frizzen spring. Even the sear screw on the interior bears a pattern P mark. The barrel has very deep and clear V / P / {Eagle Head} proof and inspection marks at the breech, but the tang date is no longer visible. The lock functions crisply on all positions and functions exactly as it should. The lock shows some minor pitting forward of the hammer to the lower rear of the pan area. The frizzen shows numerous signs of use, with dings and mars on its face. Despite the wear that indicates repeated hits from the flint in the original cock, there is really not burn out in the wood that would be typical of numerous flint ignitions. There is also no real pitting and erosion around the added percussion cone, suggesting little or no use in that configuration. All of the external flintlock parts are fully functional, although of no actual use in the percussion format. The barrel and iron furniture are all quite smooth and in very good to fine condition, with smooth metal throughout. A moderately oxidized chocolate brown patina is developing over much of the furniture and the barrel and is somewhat splotchy in areas on the barrel. The gun retains none of the original National Armory Brown finish on its exterior, which was standard on the Model 1822 musket, but this is typical of those guns that were converted to percussion, as those with worn finishes were typically struck bright rather than refinished during the conversion process. There are some traces of the original brown under the barrel, where some small streaks of that early style “milk chocolate” brown color is still present. The bore of the gun is in VERY GOOD+ condition, with no excessive wear or major pitting. It is still smooth, although somewhat dark. A good cleaning could well improve the overall condition of the bore. The gun retains both original sling swivels as well as an original full-length rammer in excellent condition with fine threads. The rammer is numbered 3, and since rammers were not typically numbered, this one was likely from another pattern arm that saw use at the same time as 8. The stock is in NEAR FINE condition as well with no breaks or repairs. As would be expected on a gun that was disassembled a significant number of times, the stock shows a significant number of bumps dings and bruises, as well as a small chip out of the top of the wrist immediately behind the barrel tang. The chip is tiny and does not detract from the overall look or displayability of this fine and rare musket. There is a small diamond pattern incised from the wood on the bottom of the stock in front of the triggerguard, the meaning of which is not known. The only crack noted is a tiny grain crack at the rear lock screw, running to the barrel channel. This is quite common on muskets and usually results from the screw being over tightened. It is barely noticeable and mentioned only for exactness.

What can I say to sum this up? This is truly a one of kind musket that would be the centerpiece of any collection that centers on conversion or pre-Civil War US muskets. The lock is one of only 30 Springfield Model 1822 sample locks ever produced and is in and of itself an exceedingly rare item. The gun is clearly a pattern/sample musket that was probably utilized to build thousands of other US M1816/22 muskets. The absolutely unique conversion retaining the rare pattern flintlock parts is striking and so unusual that is simply cannot help but draw attention and start conversations. This musket is just plain cool and is truly one of a kind and has a fantastic look to it. This is one time when you buy a gun that none of your collecting buddies can say “I’ve got one of those too!”