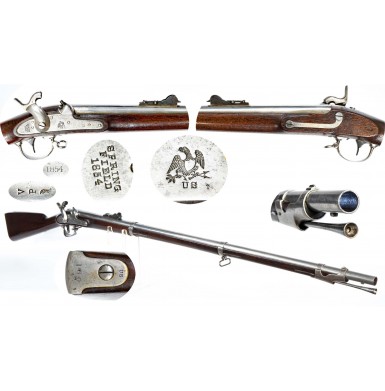 The US Model 1842 percussion infantry musket represented a major advancement in the production of US military small arms during the mid-19thcentury. The M1842 was the first general issue US military long arm to utilize the percussion ignition system and was also the first general issue arm to be manufactured on the principle of fully interchangeable parts at both US arsenals. While the percussion ignition system had been introduced to the US military with the Model 1833 Hall-North Carbine and a few years later with the Model 1841 “Mississippi” Rifle, these arms were not widely issued and were reserved for specialty troops and state militia use. Likewise, the Harper’s Ferry produced Model 1819 Hall Rifle had been manufactured on the interchangeable parts principle since its introduction, but it was also a long gun that would see limited issuance and use, when compared to the infantry musket. The M1842 also had the distinction of the being the last general issue .69 caliber smoothbore weapon to be manufactured and issued to the US military and was superseded by the .58 caliber Model 1855 rifle muskets.

The design that would become the M1842 musket was initiated at the end of 1841, when the Chief of Ordnance requested that sample arms be forwarded for to the Ordnance Board for approval. The specification was simply that the current M-1840 flintlock musket be redesigned as a percussion ignition weapon, with as few changes as possible, to make the transition to production of the new musket as simple and quickly as possible. The US M1842 percussion musket went into production at the Springfield Arsenal in 1844; with 2,956 completed guns being delivered into stores that fiscal year (July 1, 1843-June 30, 1844). Production did not commence at Harper’s Ferry until 1845, with that armory delivered 2,225 arms into store during fiscal year 1845 (July 1, 1844 to June 30, 1845). The M1842 muskets remained in production until 1855, with Springfield Armory producing 165,970 and Harpers Ferry producing 106,629, making the total production for the M1842 musket 272,599. In January of 1855, as the Ordnance Department contemplated the authorization of what would become the new Model 1855 Rifle Musket, Colonel Craig of the Ordnance Department contacted the Saint Louis Arsenal, requesting that the arsenal “…prepare a few barrels for long ranges, also the ammunition…”, he further noted that the barrels should be rifled with a twist of  “…about one revolution in 6 ½ feet.”. In March of 1855, Colonel Craig requested that both Springfield Arsenal and Harper’s Ferry should begin rifling M1842 muskets, with the addition of long-range rear sights and with the ramrods altered by recessing their tips to accept conical profile Minié pattern ammunition. Between 1855 and 1859 slightly less than 44,000 M1842 muskets were rifled at five US arsenals and armories, including the Springfield, and Harper’s Ferry armories, and the Saint Louis, Frankford and Benicia Arsenals. Of the 43,759 muskets rifled, 23,683 received long-range rear sights. The rifled and sighted alterations took place at both Harper’s Ferry and Springfield, as well as at Saint Louis and Frankford. Benicia Arsenal did not apply long-range rear sights to any of the guns that they altered. Between 1856 and 1859 Springfield rifled and sighted 9,929 M1842s, Harper’s Ferry rifled and sighted 11,060 M1842s. The Frankford Arsenal rifled and sighted 1,313 between 1857 and 1858 and the Saint Louis rifled and sighted 1,381 in 1857. There is some indication that the Ordnance Department attempted to add long range sights to the remaining rifled M1842s on hand when the Civil War erupted in 1861, as Springfield Armory superintendent Captain A.B. Dyer attempted to purchase “10,000 rear sights for percussion muskets which have been rifled” from the Sharps Rifle Manufacturing Company. It appears possible that additional muskets may have been rifled during 1861 at Saint Louis Arsenal, and some of these may have received rear sights as well, as in March of 1861, the arsenal was seeking clarification from Harper’s Ferry regarding the location and positioning of the rear sight. Additionally, Frankford, Allegheny and Saint Louis Arsenals were authorized in mid-1861 to requisition rear sights from Springfield Arsenal, and on June 5, 1861 and least 500 “leaf sights” were shipped to Frankford Arsenal, with another 1,500 promised as soon as they could be produced. No records indicate whether these sights were installed on M1842 muskets or not, but it is reasonable to believe that they were. The M1842 musket saw significant use during the American Civil War and as late at the summer of 1864. A significant number, at least 25,000, were still in the field with US forces, and a similar (or possibly large number) were almost certainly still in service with the Confederacy. The fact that the US M1842 remained in service with the US government well into the war is underscored by the fact that government was forced to make inquiries with contractors to provide spare parts, ramrods and bayonets for the guns during 1864. As late as the 2ndquarter of 1864, the Ordnance Department was still attempting to obtain the necessary parts to keep the M1842 muskets that were in the field in serviceable condition. Additional indications that a large quality of rifled M1842 remained in service late in the war is that the newly adopted Pattern of 1864 .69 cartridge box was sized to accept elongated ball (Minié) ammunition, rather than the shorter cartridges issued for smoothbore muskets. At least thirty US volunteer infantry regiments were armed or partially armed with rifled M1842 muskets, including the 59th, 111th, 114th& 115thIllinois, 20thKentucky, 9thMaine, 21st, 23rd& 35thMissouri, 47thNew York, 61stOhio, 11th, 30th, 31st, 38th, 79th, 93rd& 139thPennsylvania and the 1st, 4th, 10th, 11th, 19th& 20thWisconsin. The ever-frugal US government kept thousands of US M1842 muskets in government stores until 1870, when they began to sell of the arms via auction.

This US Model 1842 Rifled & Sighted Percussion Musket is in about FINE condition. The US arsenal at Springfield manufactured the musket and it was subsequently upgraded by rifling and the addition of a long-range rear sight and new, taller, iron front sight. The gun was altered at Springfield Arsenal and has the milled notch in the barrel under the upper barrel band strap and the rivet in the bottom of the strap to secure the new front sight. These features are unique to the guns altered at Springfield. The gun bears the production dates of 1854 on the lock and on the barrel tang. It is not uncommon for the rifled and sighted guns to be mismatched, as they were interchangeable and there was no reason to assembly mark them or keep the parts segregated during the process. As such, a matching date gun is nice to find. The musket is clearly and crisply marked in three vertical lines behind the hammer: SPRING / FIELD / 1854. The usual (US EAGLE) / US is marked on the lock, forward of the hammer. The metal of the gun has been lightly cleaned, but all markings remain clear and crisp with the exception of the tang date, which is a little light. The lock has a medium pewter appearance, with some light surface oxidation and pinpricking, along with scattered darker age discoloration. The lock is mechanically perfect, and it functions very crisply on all positions. All the markings on the lock are very crisp and clear and are extremely legible. The breech of the musket is crisply marked with the usual V / P / (Eagle Head) proof and inspection marks, and the barrel tang is stamped with the date 1854, which is a little light due to cleaning, but remains quite legible. The barrel of the musket has a mostly smooth steel gray patina with flecks of surface oxidation and age discoloration scattered along its length. The barrel is mostly smooth with some evenly distributed light pinpricking present, as well as some scattered light pitting, mostly around the bolster and very lightly scattered along the barrel and at the muzzle. The balance of the iron furniture has been cleaned as well with the same steel gray patina and scattered surface oxidation that matches the rest of the gun perfectly. The bore of the musket is mostly an evenly oxidized brown color and is rifled with three broad, shallow grooves. The bore rates about NEAR VERY GOOD overall. The rifling remains in good condition, but as it is very shallow rifling it is a little lighter near the muzzle, where is has worn from loading. The bore remains in nice overall condition but shows some light pitting evenly distributed along its entire length. A good scrubbing might improve the overall condition of the bore somewhat. The original US M1855 pattern long-range rear sight is in place on the top of the barrel, along with the arsenal installed iron front sight. The rear sight retains most of the original arsenal blued finish. The tang of the buttplate is marked with usual US, which is crisply and deeply struck. The buttplate is also stamped with the rack number 160. The musket retains its original upper sling swivel, attached to the middle barrel band, as well as the original lower swivel sling swivel. The original trumpet head ramrod with an appropriately cupped tip is present in the channel under the stock. The rod is full-length and has good threads on the end. The stock of the musket is in FINE condition. The stock is extremely crisp and sharp throughout with some of the feathery texture remaining on the wood. The stock has never been sanded and retains nice, sharp edges throughout. The stock is full-length and solid with no breaks or repairs noted. The stock does show a handful of scattered bumps, rubs, dings and mars from use, handling, and storage, but absolutely no abuse of any kind or anything excessive for a military musket that is more than 160 years old. The wood to metal fit is very nice throughout and shows the expected quality workmanship of Springfield Arsenal. The stock flat, opposite the lock, shows no cartouches nor any indication that it ever had any. This suggests an arsenal replacement stock, which might have been installed when the alteration and rifling took place. Replacement stocks were not cartouched, as the inspection cartouches were only applied to finished guns when they were accepted by the Ordnance Department.

Overall this is a very crisp and solid example of a fairly scarce US Model 1842 Rifled Musket from the famous Springfield Armory. The gun retains nice metal with crisp and strong markings throughout, with an even crisper stock. Only about 10% of the total production of US M1842 muskets were rifled and sighted, making this a fairly scarce variant of a popular and important musket. This is an attractive gun that appears to be 100% complete and correct in every way and would certainly be a very nice addition to your collection of Civil War muskets and long arms.