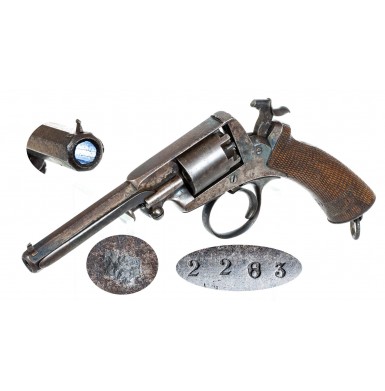 Next to the revolver designs of the Colt’s Patent Firearms Company, few were as widely copied as those of Robert Adams. Like Colt, Adams had active sought to license his designs to foreign makers, particularly in continental Europe and America. The two best known agreements of these types were with the large gunmaking firm of Auguste Francotte in Liège Belgium and with the Massachusetts Arms Company in America. While Francotte primarily produced Adams’ Model 1851 design, the “self-cocking” double action only percussion revolver, the Massachusetts Arms Company produced only his Model 1854 revolver, a traditional double actiondesign. Like Colt, Adams also found his designs being used by continental makers without any license agreement; some in direct violation of his patent protections and some simply taking advantage of the styling and appearance of his revolvers in order to more easily market them.

During the 1850s and 1860s, numerous variations of Adams pattern percussion revolvers were produced in the Prussian gunmaking center of Suhl. Some were simply inspired by Adams’ designs, while others directly infringed upon his patents. Some, like those Suhl-made Adams-style guns that are simply marked Imperial Patent on their topstraps, closely resemble Adams’ designs and have their profile but are actually produced with a two-piece frame and barrel. Adams’ primary patent covered the production of the revolver from a single forging with the barrel, frame and gripstrap all made from a single piece of metal. Thus, guns that  looked like an Adams, but were produced with multi-part frames, were not actual patent infringement guns. While some of the M1854 style revolvers may have infringement on Lt. Frederick Beaumont’s lock work patents, they did not actually infringe on patents held by Adams. Such a patent infringement would be much harder to prove in court, as  a minor change in the size or orientation of an internal part was usually sufficient to evade any potential prosecution. Most of these Adams-inspired revolvers were unmarked as to their makers, making any chance of bringing a successful patent infringement case more unlikely, as proving the gun was produced  by a specific maker was quite difficult.

Offered here is what many would call a German or Suhl Adams Patent Infringement Percussion Revolver, but which I think is more aptly called a Suhl Adams Inspired Percussion Revolver. The gun has the overall appearance of a Model 1854 Beaumont Adams percussion revolver, complete with a Kerr’s patent loading lever. Like most of the Suhl produced Adams style revolvers, the gun has practically no markings, with a blank topstrap that would be engraved by a retailer. The only markings are a  partially obscured proof mark on the forward portion of the right side of the frame, in front of the cylinder and  the serial number 2263 on the  cylinder. The serial number almost appears to read 2283, due to the deep strike of the “6” die. The proof marks is mostly obscured but appears to be a (CROWN) / Smark. While at first glance the gun  appears to be  a patent infringement revolver, very close inspection reveals what appears to be a two-piece frame, thus it is not a violation of  Adams 1851 patent. There is an  almost imperceptible seem at the top rear of the frame where the topstrap is joined to the frame. This suggests that the barrel and topstrap are made as a single piece and the rest of the frame as a piece, as was common on the Webley “Wedge Frame”, Deane & Harding and similar revolver designs. The mechanics of the action design do not appear to infringe upon Beaumont’s 1854 patent, although the gun is a “traditional double action” that allows the revolver to be used in both double and single action modes. The revolver does not incorporate any of Adams’ 1854 patent improvements like the sliding safety at the right rear of the frame or the thumb-screw arbor pin retention system. The only patent that might be infringed upon is actually for the loading lever, which is of the Kerr’s patent design.

The revolver is 9 ¼” in overall length with a 4 1/8” octagonal barrel that is rifled with six grooves that are roughly the same width as the lands. The gun is about .338” caliber, nominally 120-Bore in the English system, the typical caliber for a pocket revolver. Like most Adams type designs, the cylinder has five chambers and there is no frame mounted bolt stop as found in Colt style guns, with the action achieving lock up via a pivoting arm that engages the rear of the cylinder. Although classically “Adams”  in appearance the silhouette of the gun is clearly continental with a longer grip, with a more exaggerated curve towards the perpendicular, than found on English guns. The arbor pin is retained with a simple spring on the forward right hand portion of the frame. The revolver is blued and has checkered walnut grips with an iron butt cap and the ubiquitous European lanyard ring is secured to the butt with a stationary mount.

The revolver remains in about VERY GOOD condition. It retains strong traces to as much as maybe 10% of the original bright blue, with  most of the loss due to flaking. The balance of the gun has a moderately oxidized plum brown patina with  scattered surface roughness. The metal ranges from nearly perfectly smooth on the cylinder to some scattered minor roughness, light to moderate oxidation with some light pinpricking to the iron buttcap that is heavily oxidized with even moderate pitting. The revolver action functions very well with the gun timing, indexing and locking up exactly as it should in both single and double action modes. All of the chambers of the cylinder retain their original cones (nipples) which are also in very good, completely useable condition. The bore of the revolver is in VERY GOOD condition as well. The rifling remains quite crisp for the entire length of the barrel, which shows an evenly oxidized patina and scattered light pitting with some more moderate pitting here and there. The Kerr style loading lever is complete, functioning smoothly and correctly. The original front sight blade is dovetailed into the top of the barrel near the muzzle and the original rear sight notch is in place on the rear of the topstrap. The one-piece checkered walnut grip remains is about VERY GOOD condition as well. The grip is solid and free from any  breaks, cracks or repairs. The grip shows moderate use with  some flattening to the checkering and scattered bumps and dings; all wear commensurate with the condition of the balance of the  revolver.

Overall this is a very nice, untouched and complete example of a “German” made Adams revolver. As there was no unified Germany when  this gun was made, “Prussian” would be a more appropriate label as the gun was almost certainly made in the Prussian city of Suhl. These guns do not appear on the American market very often. This would be a nice addition to any percussion revolver collection, particularly one that has English made Adams revolvers in it.