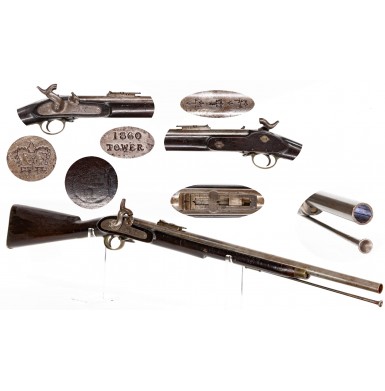 The Pattern 1851 Minié Rifle is one of the least often encountered of all general issue British military percussion long arms. The gun was the first rifled percussion arm to be widely issued to the British line infantry, replacing the smoothbore Pattern 1842 percussion musket, and foreshadowing the end of the Napoleonic Era “rifle regiment”. The gun was adopted in 1851 and was manufactured from 1852 through 1855, with some 35,000 total rifle muskets being produced. It appears that nearly every one of the Pattern 1851 rifle muskets saw service, as arms researcher and author DeWitt Bailey notes that by April of 1855 approximately 34,000 P1851s were issued for service. At the beginning of the Crimean War, the P1851 was the most widely issued “advanced weapon” in the British military small arms arsenal, as the newly adopted Pattern 1853 Enfield had not yet been produced or issued in significant numbers. The Pattern 1851 retained much of the styling of the earlier Pattern 1842 musket, with a barrel secured by keys (wedges), and three brass pipes to retain the ramrod. Unlike the .75 caliber P1842, the gun had a slightly smaller bore, measuring .708” rather than .75” and a 39” long barrel that was rifled with four broad, fairly deep grooves of uniform depth. An adjustable long-range rear sight was affixed to the upper rear of the barrel, which was graduated to a maximum distance of 900 yards. The balance of the gun was essentially the same as the earlier pattern smoothbore percussion muskets that it was designed to replace.

The P1851s performed fairly well during the opening months of the Crimean War but were quickly supplanted by the newly adopted Pattern 1853 “Enfield” Rifle Musket. This gun was a major advance in infantry long arm design and featured a reduced caliber bore of .577”, a more advanced rear sight and a barrel secured by clamping barrel bands, instead of the P1851’s wedges. The P1851 was so quickly replaced by the new technology of the “Enfield” that at the conclusion of the Crimean War the guns were considered completely obsolete. The hierarchy of the British military expected long arms to have a useable service life of ten-years and required even obsolete weapons to be held in reserve for emergency issue for at least that long before being offered for sale. However, the Pattern 1851 Minié Rifle was held in such low regard after the adoption of the P1853 that the many of the guns were “stored” outside, exposed to the weather in an area adjacent to the Tower of London known simply as “the ditch”. More than likely this “storage area” was in fact the old moat that surrounded the Tower in earlier days, and it appears that due to a poorly managed and somewhat corrupt ordnance supply system, much of the surplus materiel from the war in the Crimea suffered a similar fate.

With the coming of the American Civil War, and the urgent need for infantry long arms by both sides, a large number of obsolete British arms were sold as surplus, most of which were sold to the Confederacy by S. Isaac, Campbell & Company. According to Confederate purchasing records, some 14,900 British Pattern 1851 Minié Rifles were purchased during the early days of the war. Most of these arms were purchased between August of 1861 and January of 1862, with a handful purchased in the summer of 1862. Records indicate that at least 10,000 of these arms (and probably all of them) were purchased from J.E. Barnett & Sons of London, who had acquired the guns from the British Ordnance Department. Due to the fact that the arms had been left exposed to the elements in the Tower ditch for several years, Barnett refurbished the guns to make them functional. This apparently included the replacement of worn, damaged or missing parts and also typically involved re-proofing the guns at the London Proof House. Most known examples of Confederate imported Pattern 1851 Minié Rifles show a set of London commercial proofs, applied during the Barnett refurbishment process, in addition to their original British military proofs, or their remnants. Barnett sold the majority of these arms to S. Isaac & Campbell at a rate of 40 shillings each, including the socket bayonet, and the Confederacy was charged 44 shillings.

The Confederate marked and imported Pattern 1851 Minié Rifle offered here is in about VERY GOOD+ condition and is a somewhat unique example in that it has been shortened to musketoon length, likely for cavalry use. This exact unique example is pictured and described on pages 209 and 210 of The English Connection – Arms, Material and Support Furnished to the Confederate States of America by Great Britain.

The gun has been shortened to an overall length of 43.75-inches with the barrel shortened to 27.875-inches. The gun shows a number of interesting period repairs and modifications, performed by both Barnett prior to the gun’s export to the Confederacy and by some unknown Confederate Ordnance Depot when the gun was shortened. Most interesting it is worth noting that the lock is clearly dated 1860, some five years later than the production of the last Pattern 1851 Minié Rifles. This indicates that the lock was a replacement added by Barnett during the refurbishment process. The lower edge of the lock is marked with the file slash mating mark \ \ and the same mark is found under the barrel, indicating that the lock is not some sort of later replacement. Interestingly the lock has a tumbler with male threads and utilizes a bun nut to secure the hammer, a feature typical of arms made for use by Indian Native Troops in English service and guns made for use by the East India Company during that period. This suggests the lock was acquired from the Birmingham trade by Barnett as a replacement. The rear sight is an elevating ladder type which is graduate to 1000-yards. However, it is not a standard Pattern 1851 rear sight, and the shadow of the original production sight’s base is visible on the barrel. The sight pattern is of an experimental variant that is occasionally encountered on Pattern 1851 Minié Rifles, but when it is found it is usually on Confederate inspected P1851s, suggesting that Barnett may have obtained some of these sights as spare parts from the Weedon Ordnance Department when the obsolete guns were purchased. The modifications to the gun that can be attributed to the south include the shortened stock and barrel, with only two wedges and as single ramrod pipe retained in the shortened forend. The original stock nose cap was retained and reattached with a pair of copper rivets, similar to those used on other Confederate manufactured and repaired arms. The rear barrel tenon was re-brazed to the barrel during the repair and the ramrod spoon was removed from the stock as well. The original British military inspected ramrod was shortened appropriately for use with the gun and the shortened end was cut with a concentric ring to create a form a crude jag. The barrel’s bore was left untouched and retains the original four-groove rifling. While no front sight is present, there are some tool marks on the top of the barrel near the muzzle that suggest there may have been one added that was poorly attached and was knocked off, or it is possible the barrel was slightly longer at one point with a rear sight in place and was shortened again due to muzzle damage. Often rifle muskets shortened to musketoon length ended up with barrels in the 30-inch to 36” range, so this gun may have had a 30-inch barrel that was later shortened again. Of the course the expected Confederate CH / 1 viewer’s mark is present on the stock comb, forward of the buttplate tang, confirming Confederate acquisition.

The Barnett replaced lock is stamped rather than engraved, as typical for the P1851, and has the usual {CROWN} at the tail of the lock without a “VR” underneath, confirming its commercial rather than British military origin. The lock is marked 1860 / TOWER forward of the hammer. There are also no British military marks on the lock. As noted above, the lock is assembly marked with the same file slashes as are found under the barrel. The breech retains a full set of British military proof marks are still mostly visible. There is also an addition {CROWN} mark on the top of the breech. No commercial proof marks are found, but sometimes the barrels were not re-proofed at the London proof house, although they typically were. The bottom of the barrel is marked with the maker’s mark of Birmingham barrel maker HENRY CLIVE and with the initials A.W. twice, along with a set of British military inspection marks.

The metal of the gun’s barrel shows a mottled brownish-gray patina that remains mostly smooth. The condition of the metal is consistent throughout the barrel and lock. The bore of the gun is in about NEAR VERY GOOD condition. The bore retains crips and well-defined rifling and is lightly to pitted along its entire length. The lock of the gun is mechanically excellent and functions perfectly on all positions. The brass furniture has a lovely, dark and untouched ochre patina that is very attractive. The stock of the musket is in about NEAR VERY GOOD overall condition. The stock is solid and sound. There is a small, repaired chip at the lower rear of the lock mortise and there is a tiny, tight grain crack running from the front lock screw to the barrel channel.  The stock retains strong edges and lines and does not appear to have been sanded, but also shows a number of scattered bumps, dings, and mars from its life of combat in the Crimea and during the Civil War. The stock received a coat of varnish a very long time ago and that varnish has worn away in some areas and had developed an “alligatored” appearance where it remains on the wood.

Overall, this is a very interesting example of a Shortened Confederate Inspected British Pattern 1851 Minié Rifle. The gun has some unique features and appears to be a good example of a Confederate used musket shortened for use as a cavalry musketoon. The CH / 1 inspection mark remains mostly legible, proving the Confederate provenance. The gun is pictured and fully described in The English Connection, so it is a good opportunity own a published Confederate import musket for a rather reasonable price.