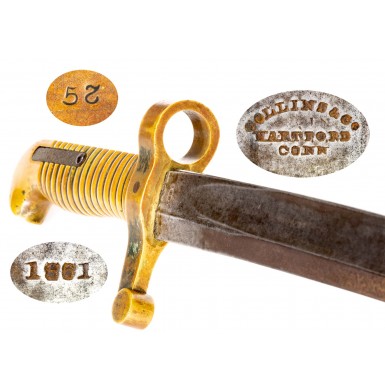 This is a VERY GOOD+ and quite scarce example of a US Civil War period saber bayonet for use on either the Spencer Navy Rifle or the Sharps & Hankins Navy Rifle. While this may seem odd, that the exact rifle it is for cannot be definitely determined, it is worth noting that to date no good references on Civil War period US saber bayonets exist, and most of the current knowledge is confined to collector experience and a mixture of good and bad information published in a handful of mostly out of print reference books. For all practical purposes, the bayonets for the two guns are indistinguishable. The only noted difference is in the location of the mating number on the hilt of the bayonet. Conventional wisdom has held that the Sharps & Hankins rifle bayonets had their mating numbers stamped on the top of the hilt, while the Spencer mating numbers were stamped on the pommel cap. That may be generally true, but I know of at least one matching set of a Sharps & Hankins Navy Rifle with its matching numbered bayonet, that has the number stamped on the pommel cap. Thus, I can only say definitively this bayonet is for one of those rifles, and hopefully it is a bayonet that you need!

Only 700 of the Sharps and Hankins Navy Rifles were produced circa 1861 with 600 being delivered to the Navy and 100 being sold on the commercial market. These guns incorporated an under-barrel keyed bayonet lug designed to accept this pattern of bayonet. The serial number of the guns are interspersed with the Sharps and Hankins Model 1862 Navy Carbines, but many of the deliveries were low numbered guns appropriate to the numbering on this bayonet. The Spencer Navy Rifle contract was for 1,000 rifle that was again delivered during 1861. Of those 1,000 guns it is believed that roughly the first 709 were equipped with the same pattern of saber bayonet lug. Thus, it would make sense that the same pattern of bayonet was used on both guns. It is also worth noting that the Spencer deliveries were from the very first guns produced, so again they have very low serial numbers, appropriate to this bayonet as well.

The bayonet is a classic Collins & Company produced brass handled, semi-Yataghan bladed bayonet that is 25” in overall length. Like a typical Collins produced bayonet an iron pin provides additional support and strength at the hilt to blade junction, with the primary blade attachment via a peen on the pommel cap. The bayonet has a 20 1/8” long blade and a 4 7/8” cast brass hilt with a fifteen groove hilt that has a moderate palm swell and a classic cock’s comb pommel cap. The blade is the standard single-edged, spear point form with a 14 ¼” fuller. The obverse blade is deeply stamped vertically with the year of production 1861, with the reverse ricasso stamped COLLINS & Co in an arc over HARTFORD / CONN in two additional vertical lines. The top of the hilt is stamped with a two-digit mating number that was apparently applied by a workman who was not paying a lot of attention. The numbers are stamped upside down from each other and can either be interpreted to be 52 if reading hilt to blade or 25 is reading blade to hilt. The diameter of the muzzle ring measures .822” and the 2 1/8” long stud mortise is cut for a 1” guide key. The mortise will accept a lug foot that is nominally .36” wide and about .09” thick.

The bayonet remains in about VERY GOOD+ condition. The blade has a mottled light and dark gray appearance with a dull pewter gray base color and darker patches of oxidized discoloration over the entire blade. There is also some scattered surface oxidation and very minor surface roughness along the lower edge of the blade, but the blade is essentially free of any pitting. The markings on the blade are deeply struck and remain quite visible, with some oxidation and discoloration in their recesses. The hilt has a deep, rich, uncleaned ocher patina that is very attractive. The strangely struck mating number on the top of the hilt remains quite crisp and legible. The original spring catch is in place on the hilt and has a thickly oxidized smooth brown patina. The catch remains fully functional and works exactly as it should.

Overall this is very nice, solid and well-marked example of an early, two-digit mating number Collins & Company saber bayonet that would be equally appropriate to add to your Sharps & Hankins Naval Rifle or your Spencer Naval Rifle. Brass handled saber bayonets do not often interchange, thus they were marked with mating numbers. As such, as long as this bayonet fits on either your Spencer Naval Rifle or Sharps & Hankins Naval Rifle, then it is the correct one for your gun! It will be a solid addition to either gun for display or would also be a good addition to any Civil War saber bayonet collection.