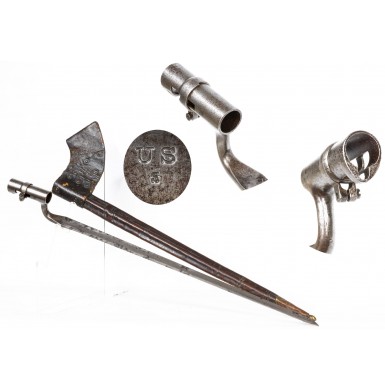 This is one of the rarer variants of the standard US Model 1855-type socket bayonet that was produced at the very end of the American Civil War. The bayonet was manufactured for use with the US Model 1865 Joslyn Rifle, the first metallic cartridge breechloading firearm to be produced at a National Armory. The US Model 1865 Joslyn Rifle Bayonet looks like a standard US Model 1855 Socket bayonet and is dimensionally the same, with the exception of the blade, which is 20” in length rather than the standard 18” length of the 1855 pattern blade. The bayonet retains the typical 1855-style 3” socket with three-step, Z-shaped mortise, a .780” muzzle diameter and 1.2” muzzle to stud distance. The extra blade length was intended to make up for the shorter barrel length of the 1865 Joslyn Rifle, when compared to the standard US Model 1861/63/64 Rifle Musket. The Joslyn Rifle had a 35.25” barrel, compared to the 40” barrel of the standard musket of the period, so the extra 2” of bayonet blade provided a similar reach to the soldier with a Joslyn Rifle and bayonet as one armed with a standard musket. This made the gun more useful in guarding against cavalry. Only 3,007 Joslyn Rifles were produced at Springfield during 1865 and it can be reasonably assumed that the bayonets were produced in similar numbers. In order to accommodate the 2” longer blade of the bayonet, a special scabbard was issued with these bayonets as well. The scabbard was based on the pattern of June of 1864 “8-Rivet” bayonet scabbard but with a longer scabbard body to accept the 20” blade.

Offered here is one of those rare US Model 1865 Joslyn Rifle Socket Bayonet with Original Scabbard. While these fairly scarce bayonets do appear for sale from time to time, the scabbards are much less common. The long scabbard bodies are prone to breakage, which is why their survival rate is fairly low. The bayonet and scabbard remain in about VERY GOOD condition. The bayonet has a 23.25” overall length with a 3” socket, a 20.25” blade and an 18.75” face flue. The face of the bayonet is clearly stamped US/s. The blade of the bayonet is partly bright with scattered surface oxidation and discoloration that appears as dark splotches on the blade. The socket has a medium pewter gray patina and shows evenly distributed light to moderate pitting. The blade was clearly protected by the scabbard over the years with the socket apparently having been exposed to something that caused the pitting. The original locking ring remains in place and functions smoothly. The scabbard is in about VERY GOOD condition as well and shows moderate wear and use. The scabbard body shows some creases and bend marks, and the leather finish shows some scattered flaking and loss. The scabbard remains solid and has tight stitching intact along the seam at the rear of the body. All of the original copper rivets remain in place in the belt frog and at the throat of the scabbard and the original sheet brass tip is in place at the end of the body, with the original four brads in place to retain it. The scabbard remains fully functional and displays nicely with the bayonet.

This solid example of the rare US Model 1865 Joslyn Rifle Socket Bayonet with Original Scabbard remains in VERY GOOD condition and will be a fine addition to any collection of US socket bayonets or as an accessory for your US Model 1865 Joslyn Rifle. This is a scarce enough bayonet that they do not appear for sale regularly and this is a good opportunity to obtain both a bayonet and a correct scabbard for a very fair price.