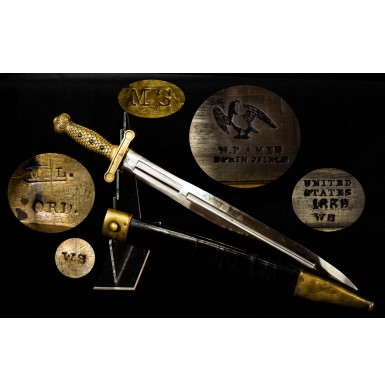 The US Model 1832 Foot Artillery Sword was the first sword to be produced by the famous N.P. Ames company of Massachusetts. The sword was based upon the French Modele 1816 Glaive d’Artillerie à Pied (Model 1816 Sword for Foot Artillery), and was a collaboration between Ames, who supplied the blades and assembled the swords, Samuel Huse who casted the brass components of the sword and Robert Dingee who manufactured scabbards, belts & frogs. Huse was actually related to Ames by marriage. The Huse maker mark appears on the hilts of the earliest of the M1832 Foot Artillery Swords, but not on the later ones, which were manufactured after Ames established their own in-house brass foundry. It is interesting to note that Colonel Bomford, the current head of the Ordnance Department, initially intended these swords to serve for Non-Commissioned Officers and Musicians, as well as for the foot (heavy) artillery. These swords were issued to NCOs and Musicians until around 1841 when the Model 1840 series of swords became widely available for issue. While scholars have debated the actual usefulness of these swords for many years, it appears that they were primarily used as tool, and likely saw minimal use as a weapon. Since the sword was only issued to Heavy Artillery after the adoption of the Model 1840 Mounted (Light or Field) Artillery saber, it is theorized that these swords were really much more useful for clearing brush, helping to build gun emplacements, etc. Their use as a potential weapon was most likely secondary.

During the early 1830s (1832-1836) Ames received contracts for 8,800 Model 1832 swords, with US Ordnance Records indicating that the large majority of them (about 86%) were delivered to the states under the Militia Act of 1808. It is interesting to note that Ames expended a lot of energy marketing the sword to the states, with the theory that the more the swords were requested by the states, the more contracts from the Federal Government would be forthcoming.

The example of the US Model 1832 Foot Artillery Sword offered here is one of the later 1830s Ames delivered swords and is dated 1839 on the ricasso and bears the very scarce MS marking for the state of Massachusetts on the guard. This is one of the standard production Ames artillery  swords that were assembled with Ames produced hilts, as Ames terminated his association with Huse’s foundry during 1834. The sword is likely from the Ordnance Department’s March 9, 1839 contract with Ames for 1,000 M1832 swords. These were delivered on November 15, 1839. It could potentially be from another March of 1839 contract for 1,500 of the  swords that was entered into only two days later. However, the bulk of those swords were delivered between the end of 1839 and August of 1841, suggesting that few would have been 1839 dated. The sword is clearly marked on one ricasso with usual {EAGLE} / N.P. AMES / SPRINGFIELD. The opposite ricasso is marked in three lines: UNITED / STATES / 1839 / WS. The face of the brass cross guard is marked with the expected inspectors’ and acceptance marks for an Ordnance Department contract sword acquired in 1839. These include the ORD. stamp for Ordnance Department above the lower quillon, with the MPL., cartouche of the accepting Ordnance officer Mann Page Lomax. An upside down WS is present below the upper quillon, the same inspection mark that appears on the obverse blade under the 1839 date. These are the initials of Ordnance Department sub-inspector William Smith.

The most important mark on the sword is the MS mark on the obverse of the guard. This indicates that the sword was delivered to the state of Massachusetts under the Militia Act of 1808. According to research by John H. Thillmann, published in his book Civil War Army Swords, records indicate that only 311 US M1832 Foot Artillery Swords were delivered to the states in 1839. It is generally believed that all 311 were sent to Massachusetts, but it is possible that they were distributed to other states that year as well. In any case, the research suggests that no more than 311 Ordnance Department marked Ames M1832 Artillery Swords were provided to Massachusetts, making this a very rare variant. This example conforms in every way to the example pictured and described on pages 44 and 45 of Mr. Thillmann’s book.

The two-piece cast brass guard is in FINE condition, and the brass has a lovely, dull golden patina. The blade is in about FINE condition as well. It is full-length and retains a large amount of the arsenal bright finish. The blade does not appear to have ever been sharpened. There is some scattered minor age discoloration present on the blade, but it is free of any pitting. Sadly, there are a couple of nicks along the edge of the blade, one about 13” from the tip and one about 5 ¾” from the tip. The tip is also slightly dulled, suggesting the sword may have been dropped on the point at some time. The original arsenal polishing marks remain in the fullers of the blade, with the correct horizontal polishing pattern. The bright blade and the lovely brass hilt make a wonderful juxtaposition for display and make the sword really attractive. The sword is accompanied by its original brass mounted leather scabbard, which is in FINE condition as well. The brass mounts have a lightly tarnished, dull golden patina, similar to the hilt. The mounts are securely attached to the leather scabbard body with their original pins. The leather scabbard body shows a number of moderate craze longs that run perpendicular to the scabbard body but retains the majority of its original finish. The only significant condition issue for the scabbard is the fact that most of the stitching is missing from the seam along its back. Otherwise, the scabbard remains solid and attractive, matching the condition of the sword quite well.

Overall this is a really attractive and very nice condition example of a scarce State of Massachusetts Marked Ames US Model 1832 Foot Artillery Sword. The sword is in FINE condition and has wonderful inspector and state markings. With no more than 311 of these Ordnance Department contract artillery swords being delivered to Massachusetts, this is a fairly scarce sword to find. It is also a very nice example of one of the first swords that Ames produced entirely in house and is old enough to have seen service in both the Mexican War and in the Civil War. If you have ever wanted a high condition, pre-Mexican War production, state marked Ames Foot Artillery sword for your collection, this one would hard to pass up.