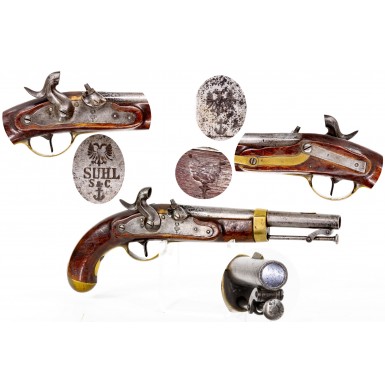 The history of the short-lived German Federation which preceded the birth of a unified Imperial Germany by some three decades is relatively complicated and involves the attempt to bring the numerous Germanic states under a single government. Although transient and a somewhat brief period in German history, one of the most lasting results of the formation of the German Federation was the establishment of the first real German Navy. The Navy was officially established on 14 June 1848 by an act of the first German parliament. The act additionally appropriated a substantial amount of funding to both build and equip a fleet. The vote was a result of a war between the Duchy of Schleswig and Denmark, which resulted in the Danes blockading German ports. Without a substantial navy to counter the blockade, the German states were helpless. The German Federal Navy was short lived, much like the German Federation that founded it, and was only in existence from 1848 to 1853.

Part of the appropriations for the Navy included funding to acquire some 1,200 percussion muskets and 1,000 percussion pistols. The Model 1849 Naval Musket was based upon the Prussian Model 1839 Musket, but shorter and handier for use onboard ship. The guns were ordered from the Suhl Consortium of gunmakers, which included Spangenberg, Sauer & Sturm, C.G. Haenel, and Valentin Christoph Schilling. The pistol was also designated as the Model 1849 and followed the form of Prussian military pistols of the period. The gun was a single shot, smooth bore, muzzle loading percussion pistol with a captive, swiveling rammer. The barrel was 9 ¼” long with a .60” caliber (15.3 mm) bore, and the gun is 16” in overall length. The barrels were browned the furniture was of brass and stocks were typically of European walnut. Like many of the naval pistols produced during the 18th and 19th century as originally produced the pistols included an iron belt hook opposite the lock. In many ways the pistol looked like a cross between the US Model 1842 percussion pistol and the Prussian “Potsdam” pattern long arms. The guns were inspected by the Kgl. Preuss. Gewehr Revisions Commission (Royal Prussian musket commission) and were marked in the metal and the wood with the crest of the German Federation, a spread-winged double-headed eagle over an anchor to indicate naval use. The musket commission clearly applied other inspection marks as well.

With the dissolution of the German Federal Navy in 1853, the majority of the navy’s small arms were placed in storage at the Federal Fortress of Mainz. This included some 1,031 muskets and at least 811 of the pistols. As these were essentially obsolete arms when compared to the Prussian Model 1841 Needle Rifle that was being adopted by most of the German states and duchies, it was decided by the German Federal Assembly to sell off these arms in January of 1861. At that time the 1,031 muskets and 811 pistols were sold as surplus. Period documents indicate that the pistols were still equipped with their belt hooks when they were sold. The balance of the small arms that had been originally ordered in 1849 remained in use on two German warships, Barbarossa and the Eckernförde. Both of these ships were originally Danish and had been captured by the Germans during the Schleswig-Holstein War in 1849. In April of 1861 the City of Philadelphia acquired 500 Prussian Muskets and 600 Prussian rifles from the firm of Herman Boker and Company. Based upon extant examples that bear both the City of Philadelphia mark and the inspection mark of gunsmith Andrew Wurfflein who inspected the arms on behalf of the city, at least half (if not more) of these “Prussian Muskets” and “Prussian Rifles” were likely Model 1849 Naval Muskets. Some of the guns are encountered with rifled bores, no doubt because Boker had them rifled and could then charge more of for the guns. Although there is no indication that the City of Philadelphia or any other American buyer acquired the Model 1849 Naval Pistols, it seems likely that Boker was the buyer of these guns as well. Today, when these scarce guns are encountered, they are almost always found in the United States and their belt hooks are almost always missing. The removal of the belt hook would make the gun easier to classify as “cavalry pistols”, which would have been more sellable during the early days of the American Civil War than “naval pistols”. I am deeply indebted to my friend Marc Schwalm and his late co-author Klaus Hofmann who helped to untangle the story of the German Federal Navy small arms in their book European Arms in the Civil War.

Offered here is one of the rare Model 1849 German Federal Naval Pistol which remains in about VERY GOOD+condition and 100% complete and correct in every way. The pistol was made by the Spangenberg Suhl Consortium and is marked with the {German Federal Eagle} / SUHL / S&C / {Anchor} on the lock, under the bolster. The {German Federal Eagle} / {Anchor} mark is also found on the top of the breech and in the wood between the breech plug tang and the counterpane on the off side of the pistol. Other markings include small inspection marks on most of the metal parts and the assembly number 18 throughout. The number is found inside the lock plate, under the barrel and on the breech plug, on the reverse of the side plates and hardware, on the ramrod and on the necks of the screws. Most of the markings remain clear and crisp and are all essentially visible. The barrel retains no finish and has a dull pewter gray patina with scattered discoloration and oxidation here and there. The barrel shows some light to moderate pitting at the breech and around the muzzle. Otherwise, the metal is essentially smooth with only some lightly scattered pinpricking and freckled areas of minor surface roughness. The brass furniture has a mellow, medium golden patina and is uncleaned and attractive. Like nearly every example known, the belt hook has been removed from the pistol. The action of the pistol remains strong and crisp, and the lock operates exactly as it should. The original captive swivel ramrod is present, and it operates smoothly. The bore of the pistol is in about VERY GOOD condition. It remains mostly smooth with moderate amounts of oxidation and some scattered pitting. The stock of the pistol is very crisp and matches the condition of the gun. It retains strong edges and lines. While it has not been sanded overall, there are some scuff marks around the breech plug tang that suggest that this area might have been lightly sanded and the “Eagle & Anchor” marking on the off side of the tang in the wood is somewhat soft. The stock is solid and complete and free of any breaks or repairs, with the only noticeable crack being a tiny grain crack that runs from the main off-side lock screw to the barrel channel. Otherwise, the stock shows only the expected scattered bumps, dings, and mars one would expect to find on a mid-19th century military pistol.

Overall, this is a very nice example of a rather scarce Model 1849 German Federal Naval Pistol. With only 1,000 of these guns produced they are inherently rare pistols. They hold the distinction of being the first official German naval handgun and for a collection of German naval pistols is the essential starting point. Although there is no evidence that these guns were imported during the American Civil War as their muskets brethren were, it seems quite likely that at least some were since most extant examples are found in the United States. This gun is a nice, complete, correct, and crisp example that will be a nice addition to your collection and for a very reasonable price.