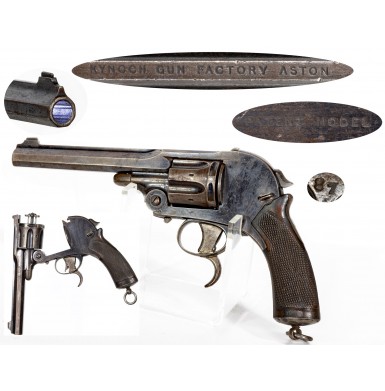 In 1885 George Kynoch and Henry Schlund came to an arrangement to lease the factory and machinery of William Tranter, one of the most successful of the mid-19th century English revolver inventors and manufacturers. Kynoch had previously been involved in the manufacture of ammunition and an 1864 advertisement for Kynoch & Co, after their takeover of the Gun, Rifle and Pistol manufacturing firm of William Pursall & Co read in part: “Kynoch & Co (Late W. Pursall & Co). Contractors to the War Department and Turkish Government. Patentees and Manufacturers of Percussion Caps, Military and Sporting Ammunition, 45 Hampton Street Birmingham.” Kynoch named the new venture in the Tranter works the Kynoch Gun Factory and it would operate until 1889 when it would be reorganized as the Aston Arms Company LTD. It is generally believed that the Kynoch Gun Factory was established both to manufacture the revolvers that had been designed by Henry Schlund and to fill orders that had been contracted for by the Government of the South African Republic (Transvaal) the previous year. This contract had been between the Transvaal government and a partnership of George Kynoch, Thomas Barnsley, and Roger Rollins. The contract covered a full array of long arms, handguns, and edged weapons. The primary long arm was a Gras style rifle built from Birmingham-made Chassepot parts but chambered in the standard 11mm Mauser cartridge of the German Model 1871 Mauser Rifle. DeWitt Bailey notes that these rifles were marked in the “American manner” with the caliber expressed as .43-77-380 and hypothesizes the firm intended to sell these rifles to the Imperial Chinese Government as well.

One of the first items that the firm produced were some samples of a break action hammerless self-extracting revolver invented by Romanian Army officer Haralamb Dimancea in 1885. Only a small number were produced by the Kynoch Gun Factory, but about 1,000 were subsequently produced by the Gatling Gun LTD for use in both Romanian and French military trials. However, the gun was never adopted by either army, with production ending in 1890 with the failure of Gatling Gun LTD. The design must have inspired Kynoch’s manager Henry Schlund as he received British Patent #9084 on 28 July 1885 for a hammerless revolver design that was quite similar to Dimancea’s. The Dimancea design was a true hammerless design with a “double action only” mechanism, and simultaneous extraction. The frame opened by rotating to the side, rather than being a more convention “tip down” or “tip up” design. The release was located on the rear face of the frame, above the grip, where it could be operated by the thumb of the firing hand. The lockwork was somewhat complicated and convoluted and that was probably one of the reasons that the perspective militaries testing it did not adopt it. The Dimancea design also had a very large blocky and awkwardly shaped frame behind the cylinder to enclose the complex mechanism. Schlund’s reinvention of the Dimancea design was somewhat more conventional in that it used a tip down frame instead of a rotating one.  It was also more streamlined with a still unconventionally large, but more rounded frame shape. The lockwork was based upon Tranter’s old “double trigger” system with a lower trigger below the triggerguard that was used to cock the concealed hammer and index the cylinder. Then a conventional trigger inside the triggerguard was used to release the sear and fire the gun. Schlund also relocated the frame release latch to a more comfortable and ergonomic location on the upper rear of the curved frame, making it easy for the shooting thumb to open the action. From an ergonomic standpoint the gun operated similarly to the Smith & Wesson Schofield, with the press of a thumb being all that was needed to open the action of the revolver.

These “First Model” or “Mark I” Kynoch Schlund revolvers were produced for a rather limited amount of time as Schlund was already working on a “Second Model” or “Mark II” design. On 18 September 1886 he received British Patent #11,900 for an improvement to his design. It abandoned the Tranter lockwork and the old double trigger mechanism and adopted a new double trigger design where both triggers were inside the guard. This new design still relied on one trigger to cock the gun and index the cylinder and the other to release the sear and fire the gun. The Schlund revolvers were only produced from about 1885 to 1889, when the Kynoch Gun Factory was purchased and reorganized as the Aston Arms Company LTD, with Henry Schlund as manager. Interestingly, although the new firm is listed in the directories as being in operation from 1889 to 1895, Schlund sold his holdings in the firm in 1891 “when the firm was stated to have ceased working”. This may have been the result of George Kynoch’s death the previous year. Apparently, the firm held on through 1895, probably by making some of the General George Tweedie’s “soft nosed compound bullet”, the primary product that the firm has been capitalized to manufacture. According to DeWitt Bailey, the “formal dissolution” of the firm came in 1895.

It is generally believed that no more than about six hundred of the Schlund revolvers of all types were produced between 1885 and 1889, with the majority being the “Second Model” or “Mark II” variant with the Schlund patent trigger. Most estimates put the “First Model” or “Mark I” revolver manufacture at about two hundred pieces at most. Both types of Schlund revolver were produced in three different barrel length variants. The 6-inch barreled guns were chambered in .476, .455, .450 and .430. The 5-inch barreled guns were chambered in .400, .380, .360 and .320. Finally, the 3” barreled revolvers were chambered in either .300 or .297/.300. All variants and both models were produced with six-shot fluted cylinders. Both models also required the removal of the checkered walnut grip to access the mainspring and as the first step in disassembly. The first model guns had a small screw with a paddle shaped head on the left side of the frame that made the removal of the screw and accompanying grip easy. The second model guns had a more conventional screw system. Both models were marked on their ribbed octagonal barrels with the “Kynoch Gun Factory Aston” mark and on the top strap “Patent Model”. Standard finishes were either blued or nickel plated, with a checkered one-piece walnut grip. Due to their rather limited production and lack of overall popularity these interesting revolvers are rarely found on the collector market today.

The revolver offered here is a FINE example of a Kynoch Schlund First Model (MK I) Revolver. It has a 6” ribbed octagonal barrel and the gun has an overall length of approximately 11 ½”. The revolver appears to be chambered in .450CF but could be .455 or .476 as the differences in bore and chamber measurements are minimal and difficult  to determine, even good digital with calipers. The top of the barrel rib is marked in a single line:

The topstrap of the gun is marked:

The left side of the barrel is marked with a pair of Birmingham commercial proof marks where it meets the topstrap. The fluted cylinder has six chambers and is unmarked with exception of the serial number 87 on its rear face. As a first model revolver, it uses the Tranter “double trigger” action with a trigger extension below the triggerguard that is used to index the cylinder and cock the concealed hammer and the trigger within the guard being used to release the sear, firing the gun.

The revolver remains in about FINE overall condition. It retains about 40%+ of its original blued finish with the majority of the surviving finish being found on the frame to the rear of the recoil shield. The barrel retains significantly less blue with most of the surviving finish being found in protected areas and along the bottom of the barrel. The cylinder shows similar finish loss with most of the bright blue being confined to the cylinder flutes and protected areas. The areas where the finish has worn or faded has a moderately oxidized brownish-gray patina with plum tones. Scattered oxidized freckling and small areas of minor roughness and some light pinpricking are found over the revolver’s metal surfaces. The revolver is in mechanically excellent condition and functions exactly as it should. The revolver times, indexes and locks up as it should. The break open action and simultaneous extraction system works exactly as it should as well. The bore of the revolver is rifled with seven lands and grooves with the grooves somewhat wider than the lands. The bore is in VERY GOOD condition with moderate oxidation along its length and showing some lightly scattered pitting with strong rifling. The original lanyard ring is in place at the butt of the revolver and the original front sight blade is in place on the rib near the muzzle. The one-piece checkered walnut grip is in VERY GOOD condition as well. It is solid and free of breaks, cracks, and repairs. However, it does show moderate wear with some wear to the sharp checkering and scattered bumps, dings, and mars.

Overall, this is a really nice example of a scarce Kynoch Schlund First Model (MK I) Revolver. These Schlund-designed English revolvers from the mid-1880s are quite uncommon and are also rather unique. The simple and ergonomic release mechanism was certainly an improvement over competing designs by makers like Webley, but the Schlund was late to the party in terms of being on the market, a market that Webley was already dominating. The concealed hammer design was also rather forward thinking for the period. While the Second Model (MK II) guns appear on the market from time to time, the First Model guns are exceptionally rare and are not found for sale very often. This is a very crisp example that is in fine mechanical condition and retains much of its original finish. This would be a fine addition to any late 19th century revolver collection, whether the collection focuses on English handguns or unique actions. Don’t miss the chance to own a scarce gun for a very reasonable price, when compared to some recent auction results for similar Schlund revolvers.