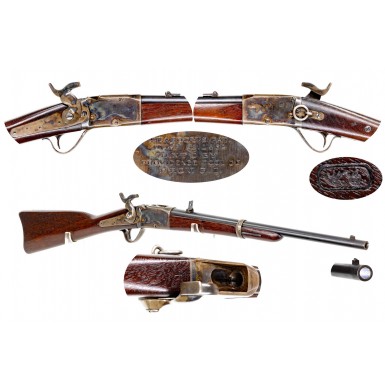 From 1866 to 1871 the Providence Tool Company would produce roughly 112,000 33” barreled rifles and 20” barreled carbines based upon the Peabody design. The guns would be offered in a variety of calibers ranging from 50 Rimfire (really .50RF Gov’t – the first officially adopted universal metallic cartridge for the US military) to .45-70, .50-70 and .43 Spanish (.433) to name a few. The first big sales opportunity came in July of 1870 when the French ordered thousands of the Peabody Carbine in .50RF as well as thousands of the full-length military rifles in .43 Spanish for the Franco-Prussian Warr. Unfortunately for the Providence Tool Company, the war ended abruptly in January of 1871. This left thousands of undelivered, and unpair for, Peabody carbines and rifles in the company’s inventory. In the immediate wake of this potential financial disaster, the company managed to sell 2,000 of the .43 Spanish military rifles to the state of Connecticut during 1871-1872, another 2,941 to Massachusetts in 1872 and 350 of the .50RF Carbines to South Carolina in 1877. During the next few years, some of the .43 Spanish military rifles were also sold off to foreign powers, including the Spanish who acquired 10,000, Mexico who acquired 8,500 and France who eventually took delivery of 33,000.

Offered here is one of the early production Providence Tool Company Peabody Military Carbines that was likely manufactured circa 1870 for Franco-Prussian War service. The gun is in the standard military configuration with a 20” round barrel secured by a single barrel band, a sling ring secured to the left side of the receiver and is chambered for the .50RF cartridge. The gun has the standard military leaf rear sight which has a 100-yard notch and two apertures in the leaf for 300 and 600 yards respectively. The front sight is of the musket style with a base and blade and is the same type used on the M1861 Rifle Muskets produced by Providence Tool during the Civil War. The finish is the standard finish for the Peabody models with a blued barrel and band, color casehardened receiver, hammer, lever, and buttplate and a two-piece straight-gripped walnut stock with a carbine butt and a smooth forend. The reverse of the receiver is marked in five lines with the address and patent information and reads:

The carbine remains in about VERY FINE to NEAR EXCELLENT condition overall and were it not for some slot wear to the screws in the receiver, it would easily rate excellent. The receiver, hammer and lever all retain about 97%+ color casehardening coverage, which remains about 92%+ vivid and is really stunning. The buttplate retains a similar amount of coverage but has faded and dulled on the bottom, rating about 85%+ vivid. The barrel band has faded to a dull, mottled gray appearance. The receiver retains clear, crisp marking and is almost entirely smooth, with only a few scattered freckles of surface oxidation and minor roughness, along with a couple of tiny areas of minor pinprick etching. The barrel retains about 90%+ original blue with some thinning and fading, giving the blue a slightly streaky appearance under strong light, which also reveals some freckles of surface oxidation shot through the finish. The carbine is mechanically excellent and functions correctly in all respected with a crisp, tight action. The carbine retains its original leaf rear sight, front sight and saddle ring. The bore of the carbine is truly EXCELLENT, remaining mirror bright with extremely crisp rifling and only some lightly scattered oxidized freckling. The stock and forend remain very crisp and retain some of their feathery texture from original production. The wood retains sharp edges and has never been sanded. The script WC cartouche on the reverse wrist remains very crisp and is deeply stamped. There is some minor flaked surface chipping at the rear of the lock plate that is the result of improper lock removal. Otherwise, the only condition issues worth noting are a handful of scattered minor bumps, dings and mars on the stock and forend.