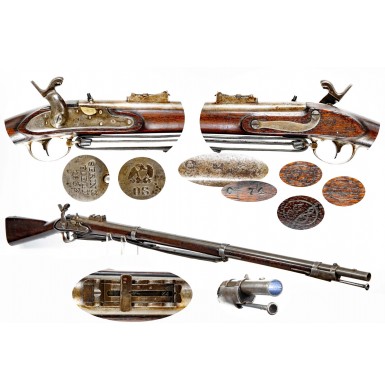 This is a FINE condition example of a relatively scarce rifled and sighted alteration of the US Model 1822/28 (M1816 Type III) Musket. The alteration was performed by Miles Greenwood of Cincinnati, OH for the state of Ohio, during the first year of the American Civil War. Greenwood received state owned US Model 1816/22/28 muskets in both original flint and those that had already been altered to percussion by the national armories. He altered those that needed to be altered to percussion, and further modified the guns by rifling them. Greenwood was also contracted to install long-range rear sights to 1/20th of the guns (5%) that he rifled. Greenwood charged $1.25 each to rifle each of the guns and an additional $1.75 to add the rear sight. Greenwood rifled a total of 23,482 guns for the state of Ohio (16,918 M1816/22/28s and 8,406 M1842 muskets), and it is estimated that slightly less than 850 of the muskets had the new rear sights added.

The US arsenals had previously experimented with the rifling of percussion altered M1816/22/28 muskets during 1856 and 1857 and found that doing so weakened the barrel sufficiently as to make it unsafe. The issue was a combination of the barrel being thinned out by the rifling process and the additional breech pressure created by the use of expanding base ammunition. The end result was that a substantial number of the rifled M1816 muskets burst in the field, and the project was abandoned. Greenwood apparently had more success with the alteration of the muskets, and a Cincinnati newspaper article noted that Greenwood’s altered .69 caliber muskets had better penetrating power than the standard .58 caliber rifle muskets, with his altered guns being able to penetrate steel plates a greater distance than the .58 caliber guns. The guns that he altered became known locally as “Greenwood Rifles”, and a number of early war Ohio regiments went off to war carrying muskets that Greenwood had altered. “Greenwood Rifles” were carried by the 41st Ohio Infantry at Shiloh and by the 51st Ohio at Perryville, and the guns saw use with many other Ohio infantry regiments during the early months of the American Civil War until they could be replaced with more modern .58 rifled muskets.

Miles Greenwood was an interesting entrepreneur in mid-19th Century Cincinnati. He was born in New Jersey in 1807 and in 1832 he established the Eagle Iron Works along the Miami Canal in the Cincinnati area. In 1852, his ironworks were destroyed by fire, and Greenwood subsequently funded the purchase of the first fire engine for the city of Cincinnati and helped to establish the first professional fire department for the city as well. With the coming of the American Civil War, Greenwood’s production shifted into high gear, and a local paper noted that by mid-1861 Greenwood was rifling 3,000 smoothbore muskets per day. Greenwood delivered his first 1,000 altered arms to the state of Ohio on July 24, 1861. Greenwood also altered and improved foreign muskets during 1861 and 1862, including some Austrian Model 1842 Augustin Consol Lock (aka “tube lock”) muskets that were sent to his factories by General Fremont for conversion to percussion, rifling and sighting. Greenwood was also involved in the production of the first six Gatling Guns in 1862, but again fire ravaged his factories (this time set by southern sympathizers) and the first six guns were destroyed, along with patent models, drawings, plans and samples. In fact, southern sympathizers managed to set his works on fire a total of three times during the course of the war. Miles Greenwood died on November 6, 1885 at the age of 78.

The gun offered here is a classic example of a Greenwood altered, rifled and sighted US Model 1822/28 (M1816 Type III) Musket. The gun was originally manufactured by Springfield Armory in 1833. As noted, the  musket is a US M1816 Type III in collector terminology, although according to the Ordnance Department it was technically a M1822/28 musket. The lock is marked in three vertical lines behind the hammer: SPRING / FIELD / 1833 and with the usual {SPREAD-WINGED EAGLE} / US in the center of the lock, below the remnants of the brass pan. The barrel tang is marked with the matching 1833 date, and the upper left quadrant of the breech is marked with the usual arsenal P / {EAGLE HEAD} V proof marks, along with Greenwood’s alphanumeric reassembly code O 74, which is also stamped into the wood on the off-side of the breech plug tang, matching the barrel and stock together from the rifling and sighting process. The counterpane of the stock retains a very good pair of original inspection cartouches. The script ET inspection of arsenal sub-inspector Elisha Toby is clearly stamped near the rear lock mounting screw and the somewhat weaker script TW mark of arsenal sub-inspector Thomas Warner is present near the rear of the counterpane. A clear script JS final inspection cartouche, the mark of the assistant Master Armorer at Springfield Armory, John Stebbins, is present behind the triggerguard along the toe-line of the stock. The gun has no “re-inspection” cartouche; the initials of a sub-inspector inspector along with a rating number like 2 or 3. This is due to the fact that when the US Ordnance Department inventoried their flintlock muskets in the 1840s, prior to altering many of them to percussion, those that were made after 1832 were instantly considered to be “first class” arms and were immediately slated for alteration to percussion. These “1st Class” muskets were altered to percussion at US government arsenals using the “Belgian” or “cone in barrel”system. The musket is marked with the alphanumeric mating mark U 15 on the top of the buttstock comb and under the barrel. This pattern of markings has been identified as the system used by the Watervliet Arsenal in Watervliet, NY when altering US muskets from flintlock to percussion.

The gun is in about FINE condition overall and is a very crisp example of a scarce Miles Greenwood Rifled & Sighted US Model 1822/28 Musket. The metal has a medium pewter patina, with areas of lightly scattered age discoloration and oxidized staining, giving is a somewhat mottled gray and brown appearance. Most of the metal is smooth, with some scattered patches of light peppering and pinpricking here and there along the length of the barrel. The gun remains essentially free of any real pitting, although there is some more moderate oxidation and moderate pinpricking around the breech of the musket. This is typical of percussion arms that saw any real use and service, as the percussion caps were very caustic and caused damage to the surrounding metal when fired. The lock functions very crisply and correctly on all positions and is mechanically sound. The musket retains both of its original sling swivels, and a post-war era early Trapdoor pattern sling is in place on the gun. This is the type of sling that is made from sewing portions of two US Pattern 1857 slings together to make them longer. So, although the sling is technically the wrong pattern, it is made from the correct Civil War pattern slings and is a nice addition to the display of the gun. The original, period button-head 1816 type ramrod is in place and is correctly modified for use with conical, Minié type ammunition. The face of the rod had been dished to accept the nose of conical bullets, a modification that Greenwood performed during the rifling and sighting process. The rod is full length and threaded on the end. The bore is rifled with 3 grooves as is typical of Greenwood’s rifling. The rifling retains strong and is very crisp. The bore is mostly bright and shows only some lightly scattered oxidation and some minor pitting along its length, rating about VERY GOOD+ to NEAR FINE overall. The correct and original Greenwood added long-range rear sight is present near the breech. The sight looks similar to that used on the British Pattern 1853 Enfield, no doubt resulting in the period reference to Greenwood’s arms being sighted with “Enfield” pattern sights. The sight is completely original and retains the ladder and leaf. Unlike similar sights of the period, no tension spring is included in the design. The correct Greenwood front sight is in place as well, a larger, built up version of the original brass front sight blade that was used when the musket was a flintlock. The musket stock is in about FINE condition as well and is full-length, solid and free of any breaks, cracks or repairs. The edges remain quite crisp and sharp, with no indication of having been sanded. The stock does show the usual assortment of bumps, dings, bruises and from use in the field, but nothing exceptional, especially when you realize that the gun is 187 years old and had a military career of some 28 years before it was altered for Civil War service! The only notable damage to stock is a tiny sliver missing from the top of the stock, on the off side of the breech plug tang. This is minor, old and does not materially detract from the display of the gun.

Overall this is a really fine, completely original and essentially untouched example of a very scarce rifled and sighted variant of the US M1816 musket, as altered by Miles Greenwood. The gun is in really wonderful, complete condition, with lots of eye appeal and will be a great addition to any collection of Civil War era long arms, especially for a collector with an interest in Western Theater units, Ohio units or a connoisseur of altered US flintlock muskets. With only about 850 of the Greenwood altered M1816 muskets receiving long range rear sights, this is very hard gun to find for sale in any condition and this is one that you will be very proud to own and will not likely find available again for some time.