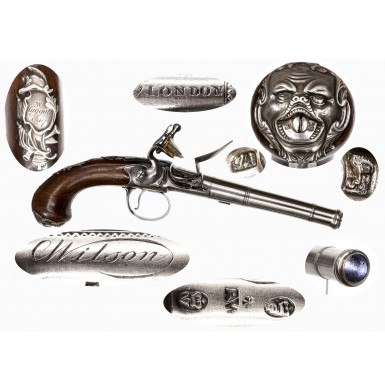 Few forms of pistol are more streamlined and graceful than the flintlock pistols known to collectors as the “Queen Anne” pistol. Despite the fact that the form appears to have originated during the 1680s, some three decades prior to Anne’s reign, and really came into its own during the early Georgian period (c1715-1760), the design became popular during her rule and the name has stuck to this day. In general, these pistols are “turn-off” flintlock pistols with tapered round barrels and cannon muzzles. The construction was mostly of metal, with a wood grip and without a forend. The barrels screwed off to allow loading from the breech, which meant that the guns were inherently ballistically superior to muzzleloading arms of the period. This loading system allowed the use of a slightly larger than bore sized ball, an impossibility with a conventional muzzleloader of the time, which was compressed when fired and achieved higher breech pressures and higher velocities than could be achieved by a comparable load in a muzzleloading pistol. The elegant form with the curved butt, often capped with a grotesque mask cap, was well designed to point naturally with a lower bore axis than competing designs, making it an inherently accurate pistol. The flintlock action was typically of the side lock design, although at the end of the period of popularity box lock actions did appear. During the zenith of the popularity of these guns, during the second and third quarters of the 18th century, it was not uncommon for the guns to be mounted in sterling silver with the butt caps, side plates and thumb pieces often intricately decorated and chiseled and chased cast silver pieces from well-known silversmiths of the period.

Offered here is a wonderful Silver Mounted Queen Anne Pistol by Wilson. The pistol is singed Wilson in script below the frizzen spring and is marked with the *RW maker’s mark of Richard Wilson between a set of London Gunmaker’s Company proof marks. Richard Wilson I was born circa 1703 and apprenticed to his uncle, London gunmaker Thomas Green in 1717. Wilson was made free of the Gunmaker’s Company in 1725, submitted his proof piece and mark in 1730 and was elected Assistant in 1734. In 1741 he was made a Master Gunsmith. In 1730 he took over the business of his deceased uncle from his aunt Agnes Green and established himself fully in the gunmaking trade. He worked as a contractor to the Hudson’s Bay Company from 1730-1756, the East India Company from 1733-1736, to the Royal African Company in 1739 and to the Board of Ordnance in 1746. In 1757 the firm became Richard & William Wilson with the addition of his son William to the family business. In 1760 William became a Master Gunmaker himself and with the death of his father in 1766 took over his father’s business and maker’s mark. William worked as William Wilson & Co at 154 Minories in London from 1767-1785. In 1794 William added his own son to the business as William Wilson & Son with his son taking over the business when William died in 1808. During his working life William, like his father, also served as a contractor to the East India Company and the Hudson’s Bay Company. As both men were working during the period that these pistols were being produced in some quantity and both men used the same mark, it can be difficult to be sure which was the actual maker. However, the script JA silversmith’s mark in the grotesque mask butt cap indicates that the silversmith was either Jerimiah Ashley whose mark was registered in November of 1740 or James Alton who registered his mark in December of 1766. Ashely was a “plate worker” who was located at the corner of Green Street in Leicester Fields (London) whose sterling silver small work has been identified on pistols dating from the 1760s. Alton was a “small worker” located near the Penny Post office is Chichester Rents, Chancery Lane (London) whose work is known on silver mounted swords and similar items. The mark is not clear enough to determine which of these very similar marks is on the butt cap, but as both makers were producing pistol mountings circa 1760s-1770s it seems reasonable to date the pistol to that period and thus to infer that it was likely produced by William, rather than Richard Wilson.

The gun follows the classic “Queen Anne” form and measures a graceful 11.75” overall length, which makes the gun “belt sized”, rather than the much larger “holster sized” guns intended for carry in pommel holsters or smaller “pocket sized” guns. The pistol is equipped with a 5.75” tapered three-stage round barrel with baluster turned rings at the transitions and a cannon muzzle. The bore measures nominally .58 caliber at the muzzle, which would be 24-Bore in the English system. As noted, the bottom of the frame, forward of the triggerguard and immediately behind the barrel junction, is engraved Wilson in script, and is stamped with the London commercial {CROWN}/V view mark followed by the Wilson’s *RW maker’s mark and then a London commercial {CROWN}/GP proof mark. The top of the breech is neatly engraved LONDON. The breech is lightly engraved with foliate themes and the breech tang, which is in the form of a busk final, is engraved with more detailed foliate motifs. The triggerguard bow is neatly engraved with the image of a blooming flower. The triggerguard, frame and tang are all neatly boarder engraved with alternating pyramid and dash patterns. This same pattern also boarders the outside edges of the cock, the periphery of the top jaw and the front edge of the frizzen. The lock is of the conventional Queen Anne pattern side lock with a rounded and fenced, externally bridled pan with a frizzen face that is neatly faceted. The cock is of the rounded swan neck variety and as noted the parts all feature identical boarder line engraving. The frizzen spring is in the classic form, following the curve of the pan and fence and then terminating in nearly 90-degree vertical leg. The spring is cut with decorative feathery motifs along its edge. The pistol is mounted in silver with the ubiquitous sterling grotesque mask butt cap, which is marked with a somewhat indistinct script JA maker’s mark and a {Lion Passant} mark. The 2.75” side plate is of silver, depicting a panoply of arms. The silver thumbpiece is a Rococo trophy of arms and is engraved W / Haggalt / Esq in three script lines. It is possible that the last name could be “Haggart,” “Haggatt” or possibly “Haggart”. All of the silver pieces are chased and chiseled to create the sharpest level of detail and crispness in the images. The walnut grip is elegantly executed with a smooth, swooping profile and impeccable wood to metal fit. A lovely raised carved apron with a neat shell motif surrounds the breech tang.

The pistol remains in FINE overall condition. It has been cleaned to bright in a European manner, a not uncommon occurrence for arms that were collected in England and on the Continent over the last 100 to 150 years. The gun remains quite crisp throughout with strong lines and edges and clear markings, showing only some minor weakness at the edges of the proofs and at some of the engraving. The metal shows some lightly scattered pinpricking and has a medium silvery-gray patina. The silver mountings show some light tarnish, mostly in the recesses, which provide a nice contrast to the deeply chased decorations. The pistol is mechanically functional with a crisp lock mechanism and a tight frizzen. As is often the case, the barrel is frozen and will not un-screw with hand pressure but might well be easy enough to remove with a properly fitted barrel wrench. The bore of the pistol is VERY GOOD. It is mostly bright with some scattered oxidation, discoloration, and lightly scattered pitting. The walnut grip remains fine and crisp and shows only some lightly scattered bumps, dings, and light handling marks.

Overall, this is a really attractive and very crisp example of a classic Silver Mounted Queen Anne Pistol produced by the famous London-based Wilson gunmaking family. The gun appears to have been produced circa 1760s-1770s and places it squarely in the period of the American Revolution. The gun is in much nicer condition than many of the surviving examples found today and while it has been cleaned in the expected fashion, it has not been over cleaned and the cleaning does not detract. The gun would be a lovely addition to any collection of Revolutionary War era arms, a collection of early English flints, or simply as a lovely example of the gunmaker’s art in the mid-18th century. This is a gun that you will be very glad to add to your collection that displays wonderfully.