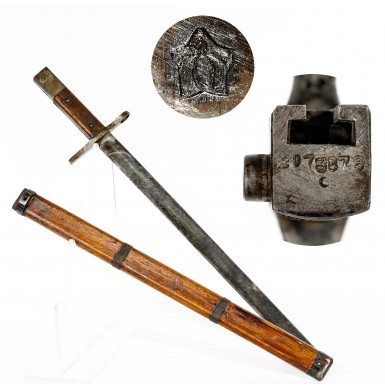 This is an about FINE condition example of a late World War II production Japanese Type 30 bayonet, produced by the Jinsen Rikugun Zoheisho Arsenal in occupied Korea. This pattern of Type 30 bayonet is listed in Raymond LaBar’s seminal work Bayonets of Japan as LB-162, Variant R. Like most of the Japanese arsenals, Jinsen started Type 30 production with the earlier style of bayonet with a fullered blade, hooked quillon crossguard and metal scabbard. Jinsen never produced the earliest form with the rounded and fully contoured, screw-retained grips, but rather used contoured flat sided grips that were rivet retained on their early production bayonets.

LaBar rates these bayonets as having a rarity factor of Uncommon / Scarce 4. The bayonet is a 152nd series bayonet that is clearly marked with the series and inspector’s kanji marks on the top of the pommel cap, along with the serial number 78878 The ricasso is clearly marked with the second style Jinsen Arsenal mark that is larger than the first type marking. The 152nd series at Jinsen introduced the unfullered blades that typify late war Japanese bayonet production. The first bayonets in the 152nd series (Variant Q) had flat sided, contoured wood grips with a palm swell. By the time the Variant R 152nd series bayonets were being produced, straight wood grips that were flat on all surfaces without any contours or palm swell were in use. The 152nd series also introduced wooden scabbards, made with both pointed and flat tips. By this time the finishing of the metal was quite minimal with blades typically showing rough machining marks. These “Last Ditch” period bayonets also had slightly shorter blades than earlier Jinsen bayonets, with the earlier ones typically have 15 5/8” blades and bayonets from this period having blades that were as much as an inch shorter than the earlier one, typically varying between 14 5/8” and 15 1/14”.

The blade on this example is full length, measuring 14 5/8” to the face of the crossguard and retains its original factory edge, with no indication of any additional sharpening. The blade retains about 80% of its original factory blued finish, which is somewhat crudely applied and shows some spottiness, uneven coverage and some age fading. The blade shows the original rough factory tool marks and crude finishing that typifies much of the Japanese metal work of this era. The blade is mostly smooth and free of any pitting over most of its length, with some minute flecks of scattered surface oxidation here and there. The hilt and cross guard retain about 30% of their original thinned blued finish, mixed with smooth, lightly oxidized grayish-brown patina. The locking mechanism is in place in the pommel cap and functions smoothly. The original riveted, flat-sided wooden grips are in very good condition and have a dark brown tone to them. The grips show light handling marks and some minor dings from service. A pair of crude metal rivets secures the grips. The bayonet is contained in its original brown stained wooden scabbard. As noted, the 152nd Series of bayonets from Jinsen were the first from to be regularly issued with a wooden scabbard, and these scabbards are encountered with both the short and long metal tips. This scabbard retains its original short metal tip. The scabbard is in GOOD+ condition. It retains most of its original stained finish with some wear and loss along the edges and contact points. The scabbard is fairly solid and complete and is not broken or repaired.  However, it shows several of the usual grain cracks running much of the length of the two-piece scabbard. The worst being on the reverse and running along the upper reverse edge from the throat to the second twine wrapping near the tip of the scabbard. There are also a couple of slivered chips of wood missing along the edges of the cracks. A little judiciously applied glue would stabilize the scabbard and help preserve it for future generations. The original twine, which secures the two halves of the scabbard body, is in place and tight, with no substantial loss. The original metal mountings (tip, throat and frog loop) are all in place and secure. They retain about 40%-50% of their original blued finish, with some light surface oxidation present.

Overall this is a very nice condition Jinsen Arsenal “Last Ditch” Japanese Type 30 Bayonet in a scarce, correct pattern wooden scabbard, which would be a nice addition to the display your late war Japanese Type 99 rifle. It would also be a great addition to any WWII Japanese edged weapons collection.