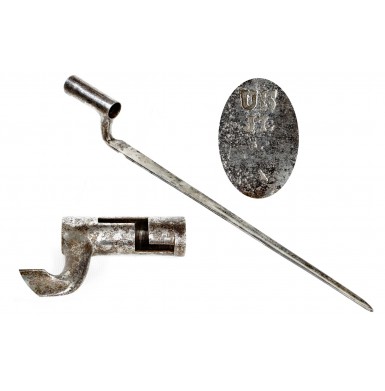 The concept of the “replacement bayonet” is well known to collectors of Civil War arms.  Thousands of US Model 1816 “Replacement Bayonets” were produced from the late 1850s through the Civil War period, these used M1816 pattern sockets and the current production M1855 pattern blade. Additionally, many thousands of US Model 1835 Replacement Bayonets, which collectors regularly mislabel as M1842 bayonets, were produced during the same period; again mating the current production bayonet blade with the older pattern M1835 socket. However, the need to produce replacement bayonets goes back to the birth of the United States.

Peter Schmidt notes in his book US Military Flintlock Muskets and their Bayonets – The Early Years, 1790-1815 that in 1793, after the conclusion of the American Revolution, nearly 50,000 muskets were in stores, yet less than 8,000 bayonets were available for use. It is not clear if the substantial disparity in numbers was due to bayonets being damaged, lost, stolen or never having been procured in the first place. However, the reason is irrelevant and the need for bayonets was clear. As a result, a program was established to obtain a significant number of replacement bayonets to mount on the muskets in storage. As no official pattern of US socket bayonet was then in use, and the arms in storage represented many different models and patterns from numerous sources, these replacement bayonets do not follow a specific pattern and appear in a wide variety of forms.

After the establishment of the US arsenal system a basic standardization of patterns began, although during much of the period of US Model 1795 Musket production there were some minor design differences between the Springfield and Harpers Ferry produced arms of the same “model”. One of the most noticeable differences was in the placement of the socket bayonet lug on the barrel. While Springfield consistently placed the lug on the top of the barrel, Harpers Ferry initially placed the lug under the barrel. Harpers Ferry produced muskets from the beginning of production through sometime in 1808 had bottom mounted bayonet lugs. The differences in construction details between the Springfield and Harpers Ferry produced muskets also meant that the contract arms from the US 1808 and 1812 contracts varied also. As each contractor produced muskets based upon the pattern arms provided from the US arsenals, those contractors that received their musket from Springfield mounted the lug on the top of the barrel, while most of the contractors that obtained their sample gun from Harpers Ferry placed their lugs on the bottom of the barrel. Even though the lug location and muzzle to stud distance became more standardized at the National Armories during the period from 1808-1810, many of the contractors who were producing guns based on Harpers Ferry sample muskets produced before mid-1808 continued to place their bayonet lugs on the bottom of the barrel, even after that placement location had been abandoned by both National Armories. Other than these contract muskets delivered under the 1808 and 1812 contracts based on Harpers Ferry model guns, no muskets were produced for US use from roughly 1809 forward with a bottom mounted bayonet lug. The US military would not return to a bottom lug on muskets until the adoption of the US Model 1840 (or M1835/40) Musket. That means that any US socket bayonet mortised for a bottom lug produced prior to the M1835 was intended to be used on a Harpers Ferry M1795 musket produced circa 1801-1808 or a US contract musket manufactured from one of those 1808 or earlier production Harpers Ferry samples with a bottom mounted lug.

Offered here is a very interesting US socket bayonet that appears to be a “Replacement Bayonet” for either a Harpers Ferry M1795 musket with a bottom lug or one of the US M1808 or M1812 contract muskets produced from one of the Harpers Ferry model guns with a bottom mounted socket bayonet lug. To simply glance at the bayonet, in generally looks like a typical US Model 1816/22/27 pattern socket bayonet. The bayonet has 16” blade that is about .91” wide at its widest point, with a 9.25” fuller and a semi-prow point blade with the upper face of the blade slightly tapered downward to meet the point. The bayonet has an overall length of 19.25” and the typical friction-fit socket without a locking ring that is nominally 3” long. The socket has a nominal muzzle (bore) diameter of .840” and shank that measures .49” in diameter where the neck meets the blade. All of these measurements conform to the typical “1816” pattern bayonet that was being produced in the post-1827 era, which was technically the M1827 socket bayonet. The specification that is non-standard is that the bayonet is cut with a three-step “Z” shaped mortise that is cut for a bottom mounted bayonet lug, not with the “T” shaped Wilson’s Improvement mortise for a top stud that is the single most defining feature of the US M1816/22/27 family of socket bayonets. As such, the bayonet appears to be a post-1827 produced bayonet intended for use on an early production Harpers Ferry US M1795 Musket circa 1801-1808 or a M1808 or M1812 US contract musket produced from the Harpers Ferry pattern with a bottom mounted lug.

The bayonet is marked US / JL / L on the face, at the ricasso. There is also small inverted “V” inspection mark at the blade to shank junction. The “JL” mark is not one that I am familiar with and does not appear in Peter Schmidt’s two-volume set US Military Flintlock Muskets and their Bayonets. However, Mark Rentschler’s article in the Society of American Bayonet Collector’s Journal Volume 101 (Fall 2017) 1816 Bayonet Forgers’, Manufacturers’ and Makers’ Marks – A Comprehensive List indicates that the “JL” mark is that of Joseph Lombard. Lombard was a Springfield Arsenal employee and the partial lists of employees pay records printed in Peter Schmidt’s 2nd volume lists Lombard twice; once in June of 1815 as an “armorer” who was paid $45.05 that month, and again in February 1825 for “welding 231 barrels” for which he was paid $61.08. The smaller “L” mark below the “JL” is likely an inspection mark, and the identity of that inspector is not known. This same mark is also found on the M1816 pattern bayonets that are marked US/JA/L. Again, neither the meaning of the lower “L” or the upper “JA” is known, although the “JA” mark is listed by Schmidt, but without any additional information.

The bayonet remains in about NEAR VERY GOOD condition. The blade is full length and the socket remains essentially round, although there is some minor differential between the horizontal and vertical axis, suggesting some minor imperfections in the roundness. The socket shows an obvious forging flaw along the top that is about 1” in length. The metal of the bayonet has a medium pewter gray patina with a significant amount of surface oxidation and substantial age discoloration. The blade is mostly smooth with a mottled pewter and darker gray coloration with the only real pitting on the blade being found close to the socket in the ricasso area. The neck, shank and socket show moderate amounts of pitting and oxidation with more dark discoloration. The blade markings are mostly clear and legible, although the pitting is more prominent near the shank, resulting in the “US” being quite clear and the other letters being less clear, but still legible.

Overall this is a solid, rather interesting and somewhat unique US Arsenal Replacement Socket Bayonet from the 1820s-1830s that was produced to accompany a musket produced at least 10, if not 20 years earlier that has a bottom mounted bayonet lug. The bayonet was likely produced for a US M1808 or M1812 contract musket that was manufactured from a Harpers Ferry model gun, although it could be for a Harpers Ferry M1795 produced circa 1801-1808. For any collector of early American bayonets, this would be an interesting piece to add to your collection that is certainly worthy of additional research to try to find the gun that it actually mates with.