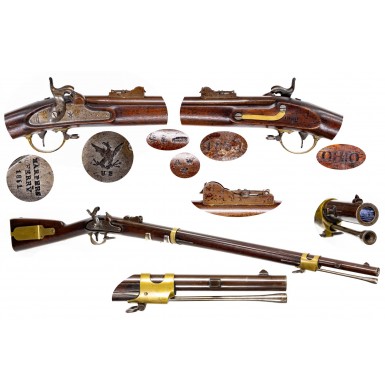 This is a FINE condition example of the a very scarce subvariant of the US Model 1841 Mississippi Rifle as produced, and later altered at the National Armory at Harpers Ferry with a long range rear sight and the addition of a saber bayonet lug.  During the production run at Harpers Ferry from 1844 to 1855, the armory produced 25,296 of the M1841 Rifles, while an additional 66,500 were produced by a variety of contractors for the US government. The M1841 was the first percussion ignition long arm to be adopted in large numbers by the US military. While the first US military percussion ignition long arms had been the US Model 1833 Hall Carbine, and the later Model 1836 Hall Carbine, those guns were produced in very small numbers for issue to specialized troops on a limited basis. The M1841 Rifle was also the first large-scale production long arm to be manufactured with interchangeable parts by a National Armory. Again, a Hall patent firearm held that distinction. The M1819 Hall breech loading flintlock rifle was the first interchangeable parts long arm produced by a National Armory, but it was produced in limited quantities and was not intended for the same level of widespread issue that the M1841 was destined for.

As originally designed, the Model 1841 was a .54 caliber rifle intended to fire a patched round ball and was equipped with a fixed rear sight and had no provision for a bayonet. Under Secretary of War Jefferson Davis, who served in that capacity during the administration of President Franklin Pierce from 1853-1857, the national armories were tasked with the job of modernizing US military small arms and munitions. Davis had direct personal experience with the effectiveness of the M1841 rifle from his command of forces armed with that rifle during the Mexican American War, and felt that arming all of the US military with rifled arms would put the army at a distinct advantage compared to armies that still relied upon smoothbore muskets.

During the early 1850s Harpers Ferry started experimenting with a variety of modifications to the M1841 rifle to make it a more modern and useful weapon. During these experimentations, a variety of adjustable rear sights and bayonet lug configurations were tried, all in an attempt to find the best possible combination of improvements for the rifle. These series of experiments, with the additional modification of adding the Maynard automatic tape priming system, eventually resulted in what would be the replacement for the M1841 rifle; the US Model 1855 rifle.

During the modification and testing process, small quantities of rifles, typically in lots of roughly 500-1000, were modified and sent into the field for trial use. Many of these guns remained in their original .54 caliber and were simply platforms to test different patterns of rear sights and saber bayonet attachment systems, along with expanding base conical .54 caliber ammunition. After the adoption of the M1855 family of long arms, and the adoption of .58 caliber as the new standard US military caliber, some of the guns were re-bored and re-rifled for the use newly adopted .58 elongated ball ammunition. All of the altered rifles were provided with either modified or newly made iron ramrods designed for use with conical balls. It is believed that all of the M1841s produced during the final year of production at Harpers Ferry were produced in .58 caliber.

The rifles that were modified at Harpers Ferry were pulled from existing stocks of arms in storage there and were typically reassembled without any regard to the origin of the parts. Since the rifles were interchangeable, there was no need to mark barrels, locks, and stocks to keep the original components together. As such, mismatched lock and barrel dates are the rule, rather than the exception on these armory-altered arms. Arms researchers and collectors differ on what terminology to use in the description of these altered “Mississippi” rifles (Type I, Type II, etc.), but at least five patterns of rear sight and three styles of saber bayonet attachment were experimented with, with extant examples of nearly every possible combination surviving in both .54 and .58 caliber.

This particular example of an experimentally altered, Harpers Ferry altered US Model 1841 Mississippi Rifle remains in about FINE condition. The gun is categorized as a Type IIC alteration by George Moller in American Military Shoulder Arms.  These guns were altered during the latter part of calendar year 1855 and into 1856. Moller notes of the 1,050 rifles that were altered during Fiscal Year 1856 (July 1, 1855-June 30, 1856) an unknown portion of them were of this variant, although it is likely that most of them were. Of those 1,050 guns, 800 were rebored to .58 caliber and re-rifled with 3 grooves, while only 250 remained in their original .54 caliber, 7-groove configuration. The rifles utilized the newly adopted US M1855 rifle pattern long-range rear sight and the M1855 Rifle saber bayonet lug which is officially referred to in period documents as the 1857 pattern bayonet stud. While the earlier 1855-style rear sights applied to the Type IIA and Type IIB alterations were graduated on the right sidewall, the newer variant used on the Type IIC alterations were marked on the left sidewall. Earlier variants of the sight were only graduated to 400-yards on the side wall, but the new Type IIC sight was gradated to 500-yards. A caption in Moller Volume III on page 146 suggests that the Type IIC sights were only gradated on the sidewall to 400-yards, however this must be a typo. The photo of the Type IIC sight is not high enough resolution to definitively see the “5” on the sight wall, but there is another number mark visible above the clearly legible “4”, which I am sure is a “5”. When the M1855 pattern sight was applied to M1855 Rifles it retained the 500-yard sidewall markings, but with both sides marked, instead of only the left side. While most Harpers Ferry alterations of M1841 have no “mating” or reassembly marks, this gun is marked with three “X” marks, XXX, on the bottom of the barrel and under the sight leaf. This may have something to do with the new sight graduation system applied to these rifles.

Overall, this is a really nice example of a scarce Harpers Ferry US Model 1841 Mississippi Rifle, with the Type IIC Harpers Ferry long range rear sight and bayonet lug alterations. The gun is in lovely condition with metal that retains some original brown, good markings, attractive brass with a thick patina, and a nice stock. The gun is a 100% correct Harpers Ferry produced rifle. This is an important distinction, as Harpers Ferry locks are often found in M1841 rifles made by other makers, in an attempt to increase the desirability and value of an otherwise less valuable contractor made gun. The gun is mechanically fine and has a very nice bore. I have always found the Mississippi Rifle variants with the long-base ladder rear sights and the keyless bayonet lugs to be the most attractive Mississippi variant, and it would be the perfect addition to any Civil War rifle display, as it was truly the direct predecessor of the M1855 brass mounted rifles and was subsequently altered concurrently while the M1855 was being produced. Based upon the late George Moller’s research it appears that only a maximum of 250 Type IIC guns were produced and left in their original .54 caliber, so this is a very rare sub-variant of these alterations. If you have been waiting for a no-excuses, completely correct Harpers Ferry altered Mississippi to add to your collection, this would be a great rifle for your collection.