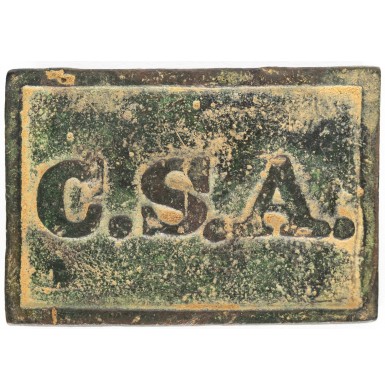 This is wonderful example of a dug Rectangular CSA “Virginia Style” Belt Plate, that appears to be classified by collectors as Mullinax #109, based upon the listing in his book Confederate Belt Buckles and Plates. Steve Mullinax noted that the plates were given this name by early relic hunters who found the plates in Virginia with some regularity back in the 1960s and 1970s. Later it would become apparent that these plates saw significant use in the Army of Tennessee, with Mullinax noting that the plates appeared to have been issued to those troops in some quantity during the winter of 1862-1863. Thus, these were the plates that were issued after the Battle of Stones River (Murfreesboro, TN), while most of the Army of Tennessee was in winter quarters in and around Tullahoma, TN. Many of the men would have marched off in the spring of 1863 for the Tullahoma Campaign would likely have still been wearing a good number of these belt plates as they moved into southeastern Tennessee and northwestern Georgia on their way to rendezvous with destiny at the Battle of Chickamauga that fall. According to the dealer who sold this plate to its former owner the plate was dug in the Dalton, GA area. I cannot confirm that is true, but the dealer is well-known to me and has a sterling reputation for honesty and for dealing in top notch Confederate artifacts.

The plate measures nominally 48mm by 70mm and remains in wonderful, untouched and uncleaned condition. The sand cast plate shows the expected irregularities and flaws that are common in these plates, as well as clear hand finishing and file marks, particularly along the edges. The plate retains all three of the hooks, and all are complete and in fine condition. The face of the plate had a wonderful woodsy patina with a mixture of a rich bronze-brown color with areas of dark green patination. These colors are mixed with the remaining dirt on the face from when the plate was dug. The rear of the plate shows a similar rich bronze-brown patina with even more remnants of the soil it was dug in. As would be expected, the slightly convex plate shows some minor irregularities in the curvature, a combination of finishing irregularities and some ground action. The plate retains crisp and clear letters on its face and a well-defined boarder around the edge of the face.

Overall, this is a really gorgeous example of a desirable Confederate belt plate in wonderful condition with a ton of eye appeal. The condition and coloration of this plate should satisfy even the pickiest of collectors and will no doubt be an addition to your collection that you will be very proud to display.