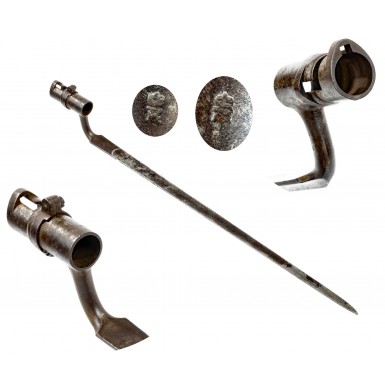 This is a scarce example of the longest of the French socket bayonets to have ever been adopted by that country’s military, the Model 1777 / AX IX Musketoon Bayonet. The bayonet was for all practical purposes a longer bladed version of the M1777 / AN IX musket bayonet. This variant had a nominally 20 ¼” long triangular blade, substantially longer than nominally the 15 1/3” long blade of the musket bayonet. The bayonet in all other ways was identical to the AN IX Musket Socket Bayonet. The 2 5/8” socket was mortised for a bottom lug and had a nominally .860” bore diameter. Only about 22,000 M1777 and corrected to AN IX musketoons were produced, so the bayonet is relatively scarce.

This Model 1777 / AX IX Musketoon Bayonet is in about VERY GOOD condition. The bayonet is untouched and has a mottled, thickly oxidized patina over most of the metal. The base color of the metal is a dull pewter with scattered patches of darker oxidation and age discoloration, which vary from thick and covering much of the face of the blade, to more wispy flecks of oxidized discoloration along the spine of the bayonet. The metal shows lightly scattered surface oxidation on the blade and substantially more on the socket, along with some light pitting on the socket and locking ring. The original locking ring is in place, but the tension screw for the ring is a modern replacement. The bayonet has two crowned inspection marks on the reverse of the neck, one a {CROWN} / R and one a {CROWN} / S. The rear edge of the socket is marked with a deeply struck R. The blade is 20 5/8” long, measured to the face of the neck, has a 2 5/8” socket, a .860” bore diameter and a nominally 1” muzzle to stud distance.