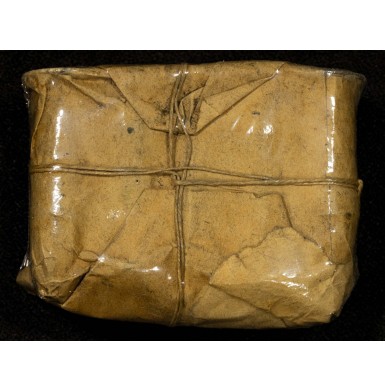 This is a wonderful complete and unopened package of .50 Maynard Carbine metallic cartridges, packaged along percussion caps, from the Frankford Arsenal. An identical example is pictured as figure 220 on page 68 of the book Percussion Ammunition Packets – Union, Confederate & European by John J. Malloy, Dean Thomas & Terry White. The packet itself comes from the John J. Malloy collection, one of the more famous and well documented collection of Civil War era cartridge packets. The packet measures about 2.8” long, 2.2” wide and 1.15” thick and has been wrapped with plastic to protect it.

The packet is unmarked but has the same features as the one pictured in the book. The two layers of cartridges are laid in an alternating row with a packet of caps at the base of the package. They are wrapped in heavy rag content paper and secured by a double row of twine. A small tail of twine to allow the package to be ripped open is present at the lower edge of one side of the packet. The packet is in VERY GOOD condition, with some minor tearing along the edges from the rims of the Maynard cartridges. The paper shows some age discoloration and surface dirt, all part of the normal age and wear for the package. The original twine remains in place and the packet is wrapped with plastic to protect it.

The various US arsenals that manufactured ammunition during the Civil War period produced traditional paper cartridges almost exclusively, with some also producing linen cartridges for the Sharps carbine. A handful of arsenals produced some other patent ammunition like combustible cartridges for the Cosmopolitan, Merrill and Starr carbines, as well as the Greene Rifle. The Frankford Arsenal was the only US arsenal munitions factory to produce patent metallic cartridge ammunition in addition to more conventional paper cartridges of the period. Frankford not only produced .50 Maynard Cartridges, but also Burnside and Gallager carbine metallic cartridge ammunition as well.

This is a great opportunity to get a rare package of Frankford Arsenal .50 Caliber Maynard Cartridges. This is a very nice package, from a famous collection, that would be a fine accessory to display with your Maynard Carbine or as an addition to your collection of Civil War cartridges.