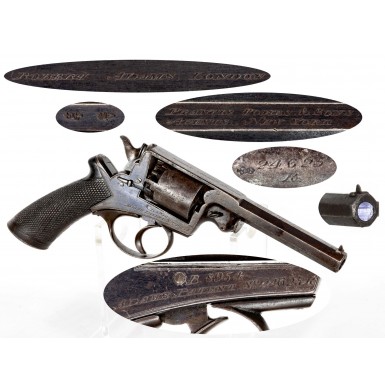 The Beaumont-Adams Model 1854 double action percussion revolver was one of the most successful English revolver designs of the mid-19th century and became a popular handgun in antebellum America. These fine quality solid frame revolvers were as important to the history and development of the revolving handgun as were the developments and designs of Sam Colt.  Robert Adams received his patent for a solid frame, one-piece revolver design in 1851.  The patent covered his design for a very strong revolver, where the frame and barrel were produced from a single forging. Adams additionally patented a self-cocking lockwork, which today would be referred to as “double action only”. This mechanism cocked the hammer, rotated the cylinder, and released the hammer, all as the result of a single pull of the trigger. While this allowed for rapid fire, the long, heavy trigger pull inhibited accurate firing. These designs were incorporated into Adams Model 1851 self-cocking revolver. In 1854 Lt. Frederick Beaumont developed an improvement for Adams’ lockwork, which produced what would be called a traditional “double action” revolver today. The new lockwork allowed the revolver to operate in the fashion of Adams’ original design, but also added the facility to cock the revolver manually and fire it with a lighter “single action” trigger pull. This refinement allowed for more accurate shooting. Interestingly the development still required the trigger to rotate and index the cylinder, unlike Colt’s design, which rotated the cylinder simultaneously with the cocking of the hammer. In 1854 Adams also patented refinements to his original frame design by adding a sliding frame mounted safety on the right side of the frame and an improved cylinder arbor retaining mechanism as well. The resultant combination of design improvements was manufactured as the Model 1854 revolver, known to most as the Beaumont-Adams revolver.

The revolvers were produced directly by Adams as part of his partnership with the London based Deane, Adams & Deane, as well under license by Birmingham makers like Joseph Brazier, Isaac Hollis & Sons. William Tranter also employed Adams solid frame in the production of his revolvers. Upon the dissolution of the Deane, Adams & Deane firm, Adams went to work for the London Armoury Company, and his revolvers were produced there as well from 1857-1858. After Adams left the London Armoury Company, he produced the revolvers himself from his own London production facility. While the majority of Adams revolvers with any kind of Civil War or military association were the larger, 54-Bore (.442) pistols, Adams produced the guns in a variety of calibers, with 120-Bore (.338) and 80-Bore (.387) being the most commonly encountered after the 54-Bore pistols. The smaller 80 bore and 120 bore pistols proved popular civilian arms, both in England and around the world. A number of American retailers imported Adams’ patent revolvers.

One of Adams’ large customers was the New York firm of Francis Tomes & Sons. The company was stated in 1819 by Francis Tomes (an immigrant from Birmingham England) and was known as Lewis & Tomes. The company sold hardware, much of which was imported from England. In 1833 the company became Tomes & Miller and in 1836 Tomes, Miller & Company. In 1840 the company was renamed Francis Tomes & Son(s) and operated under that name until 1859 when it became known as Tomes, Son & Melvain, under which name it operated until 1864. In 1864 the company was renamed Tomes, Melvain & Co and in 1874 the firm became Francis Tomes & Company, which it remained until it went out of business in 1883. Although initially formed as a hardware company, as the business expanded, it branched into other imported and “fancy goods” with a heavy emphasis on imported English firearms. The company also branched out into military goods and outfitting. The firm of Tomes, Son & Melvain delivered some 16,172 “long Enfields & bayonets”to the US Ordnance Department during the early days of the American Civil War, along with 100 “short Enfields”. A variety of military buttons are also known with the early Lewis & Tomes backmark, as well as the later Tomes, Son & Melvain backmark. Obviously, they found a good market supplying military goods to various state and local militia units, much like their New York competitors Schuyler, Hartley & Graham.

One of the more interesting customers of Francis Tomes & Sons was Thaddeus Hyatt, president of the Kansas National Committee, which was a grassroots “Free State” organization that agitated for the abolition of slavery. The Kansas Historical Society has two receipts in their collection from Francis Tomes & Sons, detailing items purchased by Hyatt in support of his cause. The receipts, dated August 22 and August 23, 1856 respectively, detail the purchase of some interesting items including:

The knives were of various makes and styles and more than 60 are listed. Obviously, Mr. Hyatt was not interested in “peaceful protests”. The Adams cartridges suggest that at least one or more Adams’ patent revolvers had been previously obtained by Hyatt. These two receipts are probably only a small sampling of the arms and supplies that were obtained from Francis Tomes & Sons by Kansas Free State supporters.

The Model 1854 Beaumont-Adams Pocket Revolver offered here is in about NEAR VERY GOOD condition. The gun is retailer marked by Francis Tomes & Company of New York, which is a very scarce, pre-Civil War mark. The revolver bears Adams’ post-London Armoury retailer mark, and as the Tomes retailer mark changed in 1859, the gun was almost certainly produced in late 1858 or early 1859. The pistol has a 4 ¼” octagonal barrel and is 120-Bore (about .338 caliber). The right side of the frame is clearly engraved in two lines:

The same Adams serial number, 24645 / R is engraved on the cylinder as well. The top strap is engraved in a single line:

and the top flat of the barrel is engraved in two lines, between the frame and the muzzle:

The left upper angled barrel flat bears a pair of London commercial proof marks, a {CROWN} / GP and a {CROWN} / V. The same alternating proof marks are found between the chambers of the cylinder, in an alternating pattern. The pistol retains about 30% of its original blued finish, mixed with a mostly smooth plum brown patina. The metal shows only some lightly scattered pinpricking and freckled surface oxidation, along with some scattered area of pitting. Most of the apparent pitting is found on the frame, forward of the cylinder chambers, around the muzzle area and on the cylinder. The bore of the pistol shows light to moderate pitting along its entire length but retains strong rifling and is partly bright. The action of the revolver is essentially functional but has certainly been repaired at some point in time. The pistol has a very stiff and unnatural feeling trigger pull, and the gun functions as a double-action-only revolver. The hammer can be manually cocked, but will not hold at full cock, and the pistol can only be fired by a long, deliberate pull of the heavy trigger, with a heavy and unnatural “bump” at the end of the pull before the hammer releases. The revolver appears to time and index correctly, but due to the heavy action and likelihood that the internals have been tinkered with, I would not recommend ever trying to shoot this pistol. The other issue noted is that the loading lever is an old, likely period of use, replacement. The patina of the lever matches the balance of the gun well, and it appears to have been with the revolver for a very long time. It is somewhat crudely made, but it functions smoothly and correctly and locks into its resting positions exactly as it should. The pistol retains its original 1854 Adams’ patent safety on the right side of the frame and the 1854 patent cylinder arbor retaining thumbscrew as well. The thumbscrew is often lost or damaged and is rarely found intact on these revolvers. The original dovetailed front sight is present near the muzzle of the revolver as well. The one-piece checkered walnut grip is in about VERY GOOD+ to NEAR FINE condition. The grip is solid and free from any breaks, cracks, or repairs. The checkering remains mostly crisp, with only some light to moderate flattening and wear due to use and carry.

Overall, this is an attractive example of a pre-Civil War Model 1854 Beaumont-Adams Pocket Revolver with a very clear and rarely encountered Francis Tomes & Sons retailer’s mark. Although the pistol has some mechanical issues, the gun has a lot of eye appeal, a good amount of original finish and displays very well. The association of Francis Tomes & Sons with the Kansas “Free Staters” and the fact that this gun was manufactured in late 1858 or early 1859, suggests that this pistol may have had a small part in the horrors of “Bleeding Kansas” that helped to spark the American Civil War. This would be a great addition to any Civil War era pistol collection but would be particularly great to add to a display that revolves around the pre-Civil War battlefields of “Bloody Kansas”.