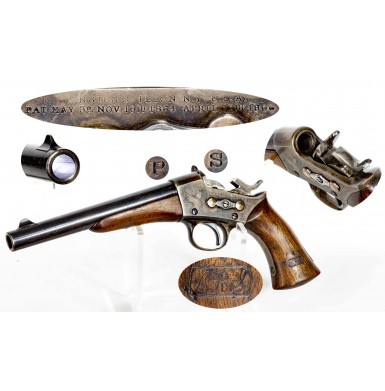 The Remington Rolling Block series of pistols used by the US military during the late 1860s and early 1870s are an excellent example of how a military bureaucracy can rarely react to rapid changes in technology and tactics in a way that creates positive outcomes for the soldiers who are under their direction. The end of the American Civil War had clearly indicated that self-contained metallic cartridge, used in conjunction with some form of breechloading firearm, were the wave of the future for all of the military organizations around the world. What was not immediately obvious to the men of the general staff, many of whom had received their baptism under fire during the age of smoothbore flintlock firearms, was that these weapons would also have to be repeating, and not single-shot firearms. The prejudice of the Ordnance Department and the general staff against repeating firearms had been displayed during the Civil War with the strong resistance to adopting such revolutionary designs as the Spencer and the Henry rifle. While both were eventually acquired in some quantity, particularly the Spencer, the end of the war resulted in an immediate return to the doctrine of single shot long arms to reduce the potential for ammunition wastage by the men. Amazingly, this same attitude regarding repeating handguns was pervasive within both the navy and the cavalry. The navy had long felt that the pistol was of limited utility and was only effective during the boarding of enemy ships. As the boarding of ships had essentially ended for the US Navy with age of armor-clad vessels, the need for a handgun for general issue was greatly curtailed. Additionally, the naval doctrine of the period specified that the cutlass or axe was the preferred weapon for boarding parties, not the handgun. The navy also held to same theory as the US Army, that repeating arms resulted in ammunition wastage. With these baselines in place, the navy proceeded to contract for a new pistol in 1865. The gun would utilize the new metallic cartridge ammunition but would be a single shot pistol rather than a revolver. In one swift motion the navy took one step forward towards the 1870s with the adoption of modern ammunition and at least two steps back to the 1840s with the return to a single shot pistol. The gun adopted was the Model 1865 Remington Rolling Block pistol. The gun was chambered for a .50 RF cartridge that was essentially a reduced power version of the .50 RF Government cartridge that had be adopted by the army for use in carbines. The gun had an 8 ½” round barrel and a spur trigger and was a design that was rather quickly found to be lacking. By 1867, a modified version which was designated as the Model 1867 was adopted. Most of the existing Model 1865 pistols were subsequently modified to the new standard. This included shortening the barrel to 8”, altering the pistols to the new .50-25 CF government pistol cartridge and adding a triggerguard. The pistol, based upon the same action that Remington had used to produce a successful series of carbines and rifles, was a simple and robust handgun that offered a significantly larger caliber bullet than the .36 caliber percussion revolvers then primarily in use by the navy. The .50-25 cartridge was loaded with a 300 grain .50 bullet propelled by 25 grains of black powder to a rather slow 600 fps, but still capable of producing about 240 ft/lbs of muzzle energy. This represented about a 25% increase in muzzle energy over a similar .36 caliber percussion cartridge using a conical projectile and about the same muzzle energy as the .44 caliber percussion cartridges then in use.

The US Model 1871 Army Rolling Block Pistol offered here is in about FINE condition and remains in the original .50-25 CF chambering. The left side of the receiver is marked in two lines:

The left side of the receiver is also marked with the US military sub-inspectors’ initials P and S. The frame and receiver retain about 85%+ of their vivid case colored finish with some minor fading and dulling from age. The triggerguard itself has dulled to a mostly pewter gray color with some traces of mottled color in the protected areas of the front and rear web. The gripstrap is mostly a silvery gray with no real case color present but the backstrap still retains some of the vivid, mottled coloring near the top of the grip area’s hump. The barrel retains about 80%+ of its original blued finish, showing some dulling and fading from age. Most of the loss seems to be from the scattered surface scuffs and minor finish scratches that have worn some of the blue away. There is also some wear and loss along the contact points and high edges, particularly around the muzzle crown. The hammer and pivoting block retain the some of their original arsenal bright polish, with some scattered surface oxidation and discoloration. Both of the cross bolts in the frame retain some strong traces of their original strawed finish, which has thinned and faded. The metal is all smooth with no pitting of any sort present, although there is some light pinpricking here and there on the frame and around the breech and muzzle areas. Some small flecks of minor surface oxidation can be detected under strong light, scattered along the barrel, mixed with the original blued finish, as well as some more moderate freckling and oxidation at the muzzle and breech. The bore of the pistol is in VERY FINE condition and is mostly mirror bright. It retains excellent, crisp rifling. The bore shows only some light pinpricking and some light frosting along its length. The action of the pistol works perfectly and remains extremely crisp and tight with excellent mechanics. The markings are clear and fully legible and are crisply stamped, with the exception of the Remington address, which seems to have been lightly stamped. The one-piece walnut grip remains in about FINE condition. It retains a clear script inspectors’ cartouche that reads CRS, for armory sub-inspector Curtis R. Stickney. The forend remains in about NEAR FINE condition, with the only real condition issue being a tiny area of slivered loss along the top edge on the reverse, about halfway down its length. Both of the wood parts are free of any breaks, cracks or repairs and remain solid and complete. They do show some light wear and a small number of minor bumps, dings, and handling marks as would be expected, with the forend showing slightly more wear than the grip.

Overall, this is a really attractive and rather high condition example of a relatively scarce US Martial Pistol from the beginning of the cartridge age and the end of the single-shot pistol era. This would be both a wonderful addition to your Indian War era martial arms collection and a great potential single-shot target pistol or game getter. This would be a very nice addition to any serious collection of US martial pistols and would require spending significantly more money to materially upgrade from.