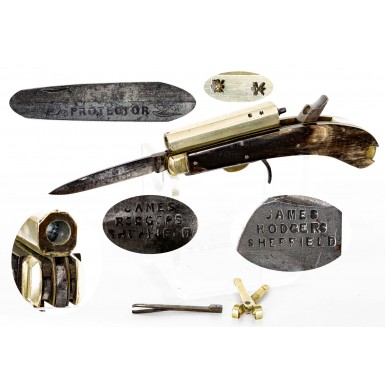 The concept of combining a firearm with an edged weapon is an idea that goes back hundreds of years. By the mid-16thcentury wheellock pistol-axes were being regularly produced in Poland and the various Germanic states, and by the early 17th century the combination pistol-sword or pistol-knife had become a common hunting accessory in much of Europe. For the most part, these curiosity weapons remained in the realm of sporting arms and saw minimal use in military or self-defense applications.

By the mid-18th century, the addition of knife blades, particularly self-deploying “snap bayonets” had become a regularly seen option on English pistols, blunderbusses and coaching carbine. In a world where you had only one or two shots to fire from your firearm, having an edged weapon for back up use in a dicey situation only made sense.

The concept of the personal protection knife pistol was truly refined in England by the partnership of James Rodgers and Philip Unwin, a pair of Sheffield based cutlers in the county of Yorkshire. Unwin joined Rodgers’ very successful knife-making firm in 1828. Rodgers had made a name for himself producing a large array of “Bowie” style knives for the domestic English market, but in particular for export to the United States. The firm had trademarked the NON*XLL mark, intended to be said aloud as “non-excel”, suggesting there was no peer to their products.

Between the two partners they developed and patented a system to combine a single-shot percussion pistol with typical folding pocketknife. The year after the partnership was created, Rodgers died, and Unwin continued to run the business until it failed in the late 1860s. Initially the firm was located at 7 Charles Street (from about 1827) and moved to 23 Burgess Street around 1840. In 1862 it moved to 124 Rockingham Street where it remained until it went out of business. The 1828 Sheffield business director listed the firm as follows: “Unwin and Rodgers, manufacturers of pen, pocket and desk knives, pearl sides, clasps, buckles, and in a great variety. 7 Charles Street.” In 1841, the directories further noted the firm were “manufacturers of spring knife cutlery, including lancets, scissor knives and pen machines, pistol knives, American and Indian hunting and self-defense knives.” Their percussion knife pistol was one of the mainstays of their product line by the early 1840s and in 1861 they received British Patent #2801 for a cartridge version.

The knife pistols were produced in a variety of sizes and caliber, ranging typically from about .25 to .35 with the larger knives being mated with larger pistols. The guns were single action, percussion muzzleloading firearms with a folding trigger that was concealed in the bottom of the knife. Typically, the pistol-knife included two folding blades, a primary and a smaller secondary blade. Tools including a bullet mold and a set of tweezers were usually provided and stored in the butt of the knife and a storage compartment for projectiles was usually provided in the butt. Grip scales were normally of horn and secured by pins. Barrels were normally octagonal in cross section and were made of iron with German silver type plating. Bolsters were normally of German silver as well.

While pistol knives are not completely uncommon on the collector market today, high condition examples with no significant damage or restoration are rare. In particular, finding an example without significant damage or repair to the horn grip scales is quite difficult. Due to their regular carry in pockets, they were often jostled, dinged and dropped, resulting in heavy wear.

This is a particularly FINE condition example of a James Rodgers Marked Percussion Pistol-Knife, with an etched primary blade that reads SELF PROTECTOR. The pistol is about 6 3/8” in overall length with the blades folded and has a 3 5/16” octagonal barrel with a nominally .30 caliber smooth bore. The barrel in unmarked other than a set of post-1813 Birmingham commercial proof marks. The pistol knife has two blades. The primary is a double-edged spear-point blade that measures 3 ½” in length and is slightly more than ½” wide. The blade has a prominent medial ridge and is acid etched with the reverse with the legend SELF / PROTECTOR with the words above and below the ridge. The etching has a frosted background with foliate decorations and a {Spread-Winged Eagle} motif, suggesting the pistol knife was destined for the American market.  The reverse ricasso of the primary blade is stamped in three lines: JAMES / RODGERS / SHEFFIELD. The smaller blade is a is a single-edged drop point blade that measures 2 ½” in length and is ¼” wide. This blade is undecorated and has the same three line stamp on the reverse ricasso as the larger blade. With the larger blade deployed, the overall length of the pistol knife is about 10”. The knife pistol retains its original steel tweezers and the original bullet mold in their storage compartments in the butt and has a fully functional butt trap to store projectiles, which is empty.

As noted, the pistol knife remains in about FINE condition. It is 100% complete, correct and original and remains mechanically functional. The blades deploy and lock into place tightly and the hammer cocks as it should and is released by the trigger as it should. The folding trigger does not automatically deploy when the pistol is cocked, but that feature is not always present in folding trigger guns. The barrel retains nearly all of the German silver nickel finish with a yellowish tone and shows only some very minor flaking and loss, primarily around the muzzle area. The bore of the pistol is moderately oxidized and is mostly dark with some scattered pitting. The knife blades are full-length, and the primary blade retains about 60%+ of its etched panel decoration, which was difficult to photograph due to pronounced median ridge and the reflectiveness of the metal. Both blades show some light sharpening marks, but nothing beyond normal use. The blades both show scattered light surface oxidation and discoloration but are not quite as dark and mottled as they appear in the photos, the result of the contrast between the blades, the white background and the high intensity photographic lighting. In the hand, the blades are more attractive than they appear in the pictures and the primary blade retains more etching than it appears in the photos. The horn grip scales remain in wonderful condition and show only some very light scuffing and wear, with some scattered handling marks. The horn scales are often found cracked or broken and the larger the pistol knife, the more likely they are to be damaged. These are unbroken and free of cracks. They only show some very minor chipped around the pins, most notably on the lower right edge around the bottom pin.

Overall, this is a really wonderful example of a larger sized James Rodgers “Self Protector” Pistol Knife in a fine state of preservation. The gun shows some real world use and carry but shows no abuse. The etched blade is a nice feature that is not regularly encountered, and the pistol retains the little accessories that are often missing. If you are only going to add one of these pieces of firearms curiosa to your collection, this would be a great one to acquire. It is in fine condition, all complete and correct and larger than many, making it much more appealing to put into a display.