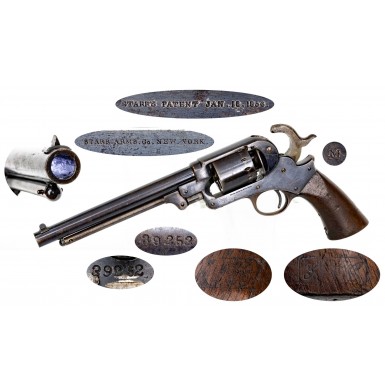 In September of 1863, Starr received a contract to deliver 25,000 of their Improved Army Revolvers at the rate of $12.00 each. The contract specified that 1,000 guns were to be delivered during the month of October (1863), with additional deliveries of 2,000 guns per month over the next twelve months until the contract was fulfilled. Starr delivered the first 1,000 of the Single Action M1863 revolvers in December of 1863 and a total of 24,002 over the twelve months of 1864. During the American Civil War, the M1863 Starr was issued to several US cavalry regiments, including the 1st Colorado Cavalry, the 6th & 7th Michigan Cavalry, and the 11th New York Cavalry, just to name a few.

After the Civil War, the obsolete Starr revolvers of all patterns were returned to various US arsenals and remained in storage until they were eventually disposed of. The first major sale of Starr .44 revolvers was in October of 1865, when 99 of the revolvers were sold from the Watervliet Arsenal at the price of $5.00 each. Over the next 36 years Starr revolvers were sold from several US Arsenals. The largest single sale of .44 Starr revolvers took place in December of 1870, when the Austin Baldwin Company acquired 20,000 of the revolvers from the New York Arsenal, purchasing them for $8.00 each. The last major sale of .44 Starr revolvers occurred on June 19, 1901, when Francis Bannerman & Company purchased 7,537 of the revolvers from the New York Arsenal, paying between 2.13¢ and 27.55¢ each; a far cry from the original contract price of $12.00 for the single action guns, and $20.00 or more for the earlier double action revolvers.

This example of the Starr Model 1863 Single Action Army revolver remains in about FINE condition. The right side of the gun is crisply marked STARR’S PATENT JAN 15 1856 and the left side is marked STARR ARMS Co NEW. YORK. There are a variety US government sub-inspector marks crisply stamped on the frame, barrel, cylinder, and trigger guard, which include the capital letters M and C. The matching serial number of 39252 is present on the center of the lower front of the frame below the loading level recess, in the hammer cut out in the upper rear of the frame and on the cylinder. This is a mid-production Model 1863 with their serial numbers continuing from the production serial number range of the earlier M1858. If Starr stayed on the delivery schedule for their contract, this gun would have been delivered around May or June of 1864 and almost certainly would have been in the field by the end of the summer, possibly intime for the end of Grant’s Overland Campaign and certainly by the beginning of the Siege of Petersburg. The one-piece walnut grip is retains two inspection cartouches. The script letters GKC are present in a boxed cartouches with rounded edges on the left side of the grip. This is the mark of Springfield Arsenal sub-inspector George K. Charter. His cartouche has been noted on Single Action Starr revolvers in the 37,XXX-39,XXX serial number range. The GKC mark is quite visible and mostly legible. The right side of the grip has a much weaker cartouche that is very difficult to read but appears to be the mark of the same inspector. The same cartouche on both sides of the grip is not common, as usually one is the mark of the sub-inspector, and one is the mark of the accepting Ordnance Department officer or official. However, I have seen the same cartouche on both sides of Starr Single Action Army revolvers before, in particular the ADK mark of A.D. King.

The gun retains about 75%+ of its original blued finish, averaged overall. The .44 caliber, 8” round barrel retains most of its original blue, which has thinned and worn at the high edges and contact points. In addition to thinning, the blue does show some scattered minor scuffs and mars and some scattered freckles of surface oxidation. The frame retains most of its original bright blued finish as well, with most of the loss due to light surface scuffs and scratches as well as some flaking. The cylinder retains about half of its original bright blue, again the apparent victim of flaking combined with real world use. The exposed metal has developed an attractive smoothly oxidized plum brown patina. This same smooth oxidation is present on the frame of the revolver where the finish has flaked. The largest areas of finish loss are the backstrap and grip frame which have a mostly dull gray patina with freckled surface oxidation and some minor traces of blue. In addition to the various minor scuffs and surface finish scratches, the metal shows some minor scattered impact marks and a ding the top upper edge of the muzzle, below the front sight blade. The hammer retains minor traces of its case coloring in protected areas and has a freckled oxidized brown over pewter patina. The loading lever retains about 10%-20% of its original case coloring, with the rear portion near the pivot retaining some traces of the vibrant color, with the balance of the lever faded to a mostly pewter gray patina, which again shows moderate amounts of freckled oxidation. The metal of the gun is mostly smooth and free of any significant pitting but does show some scattered patches of very minor freckled surface oxidation as noted above and some minute areas of lightly scattered minor pinpricking. The gun remains in excellent mechanical condition and times, indexes and locks up perfectly. The cylinder retains all of its original cones (nipples), and they are very good, completely useable condition with no breaks or cracks. The bore is about NEAR FINEcondition. It is mostly bright with crisp rifling present but does show some scattered oxidation and some scattered light pitting with a couple of patches of more moderate pitting. The Colt style loading lever and catch work as they should, and the gun breaks down easily with the removal of the hinge locking screw at the upper rear of the righthand side of the frame. The one-piece walnut grip is in NEAR FINE condition as well. There is a small, chipped ding on the lower rear edge, as well as couple of much small chips around the sharp lower edge. The grip shows moderate wear with scattered bumps, dings, and mars. The grip does not appear to have been sanded, and it appears the wear to the cartouches to be the result of handling and use.

Overall, this is a really nice condition example of the Starr Model 1863 Single Action Army Revolver.  The gun shows some real-world use but no real abuse during its service life. While high condition M1858 Starr double action revolvers are relatively common, the single action M1863s saw more service, both during the war and as post war surplus, and are more difficult to find with any level of finish on them. This is particularly true of Starr revolvers which are well known for their finishes flaking off, even with limited carry and use. The Starr M1863 was the third most used handgun issued to the US cavalry during the war, and no display of Civil War era martial revolvers or cavalry arms is complete without one. This is a very nice, significantly above average example that any serious collector would be proud to own and display.