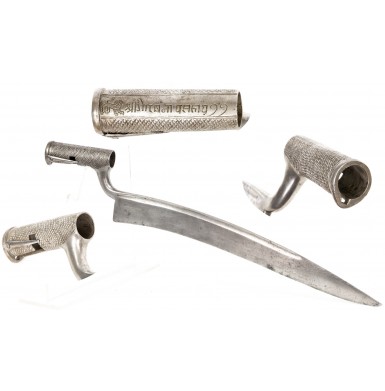 Let’s get this out of the way right up front; almost all of these are fake, but this one is not. Most are, in fact, fantasy fabrications and of fairly recent manufacture. However, the use of these bayonets by Nepalese forces is known and discussed on page 320 of Ian Skennerton’s British & Commonwealth Bayonets where three legitimate examples are pictured as Figures 112, 113 & 114. This example is one of the rare, legitimate ones, from an old and extensive world bayonet collection. Most noticeable in the legitimate examples is that the “Kukri” blade does not really have the conventional Kukri knife silhouette, but a more pointed blade shape, although it does retain the curved profile. Skennerton notes that these bayonets are a mating of the then current issue India Pattern bayonet socket for mounting on the India Pattern (3rd Model) Brown Bess, with the uniquely large, curved Nepalese “Kukri” blade. They typically appear with the India Pattern spring catch at the rear of the socket. Some examples are known with smooth sockets, while other have checkered sockets to improve the grip when using the bayonet as a knife. This is one of the checkered socket examples, quite similar to Figure 113 in Skennerton’s book, an example from the famous Homer Brett world bayonet collection. Mr. Brett has also examined this example that I am offering for sale and he has blessed it as authentic, as has well-known bayonet collector and dealer Jason Kaplan.

This bayonet is in very good condition with a dull pewter patina and scattered surface oxidation, freckled discoloration and some small, fingerprint sized patches of pinpricking and minor pitting. The checkering on the socket remains crisp and well defined and the Indian Pattern spring catch remains in place and fully functional. The bayonet measures about 21.5” in overall length with a 4” socket that has a .96” (24.5mm) bore diameter. Because of the use of the spring catch, the mortise cut is a simple “L” shaped, two-step pattern, rather than the more typical three-step “Z” shaped cut found on most British India Pattern bayonets. The curved 16.5” blade is single edged with a 11.25” fuller running along the spine from the shank towards the tip and is 2” wide at the shank. The tip is very slightly bent but still remains sharp and full-length. As would be expected from a non-armory, local production bayonet, the blade shows some nice forging flaws and some impurities in the steel. Skennerton further notes that these handmade bayonets do vary somewhat in overall profile and measurements, although this one conforms quite closely to the Brett supplied example in Figure 113. The top of the socket in engraved with a stylized lion motif, followed by what I understand is a Hindi prayer in Sanskrit. It is further my understanding that a small number of these legitimate Kukri style bayonets, probably only a couple of dozen, were exported from Nepal during the 1970s by a dealer named Anthony Carter. I am quite sure that this is one of those bayonets from that original group. Normally these bayonets appear in fairly rough shape with moderate to heavy pitting. This is a real gem of an example with only a couple of small areas of the most minor pitting and lovely, dull pewter patina that is quite attractive. Despite the importation of some more legitimate examples in more recent years, released from Nepalese government stores, these mid-19th century examples remain extremely rare on the collector market and rarely appear in such very nice condition. This would be a wonderful centerpiece in any world bayonet or British Empire bayonet collection.