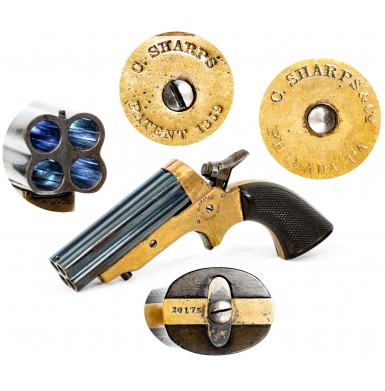 Christian Sharps is probably responsible for designing the most successful and recognizable family of breechloading percussion longarms of the 19th century. Sharps’ early training in the field of firearms had occurred at the Harpers Ferry Arsenal in Virginia, where he went to work in 1830 under the supervision of gun designer and pioneer of parts interchangeability, John Hall. Sharps worked at Harpers Ferry for over a decade, learning the arms making trade, as well as the early concepts of assembly line production. In 1848, Sharps received his first patent for a breechloading carbine and moved to the Philadelphia area, where he proceeded to contract with a local gun maker to manufacture his new design.

The first Sharps patent firearms were produced by A.S. Nippes of Mill Creek, PA in 1849 and 1850. By 1851, Christian Sharps formed the Sharps Rifle Manufacturing Company in Hartford, CT. As the company was not yet ready to produce arms, Sharps entered into an agreement with Robbins & Lawrence of Windsor, VT to manufacture his arms. By 1852, RS Lawrence (formerly of Robbins & Lawrence) moved to Hartford and became the master armorer of the Sharps Rifle Company, and manufacture of the arms began in house a year or so later. However, Christian Sharps and the others at the Sharps Rifle Company did not always see eye to eye, and in 1853 Sharps left the company that bore his name and returned to the Philadelphia area.

Over the next seven years, the Sharps Rifle Company continued to grow, producing a variety of carbines and rifles of various patterns, with each new pattern an attempt to improve upon their earlier designs. Several thousand arms were produced by the company during this time both for various small US government contracts and for sale to the general public. The Sharps Rifle Company really struck gold with the introduction of their “New Model” 1859 series of breechloading percussion carbines and rifles, which they subsequently improved upon with the “New Model” 1863 pattern. During the Civil War, the Sharps Rifle Company produced thousands of carbines and rifles for the US government with more than 77,000 of his carbines being purchased for use by the US military. However, all this success was without the namesake of the company at its helm. Rather, Christian Sharps established a new business under the name C. Sharps & Company in Philadelphia in 1854.

The C. Sharps Company initially produced a single shot, breech loading pistol and quickly followed this up with a “pistol rifle” design. In 1859, Sharps received a patent for what would be the most successful design and the biggest money maker for his new venture, a four-barreled pepperbox pistol. Sharps produced the guns in a variety of variations, based upon their caliber, and thus their frame size. The guns were manufactured in .22RF, .30RF and .32RF, and over the next few years Sharps produced thousands of the easily concealable personal protection cartridge guns.

In 1862, Sharps entered into a partnership with William Hankins, and for the next four years the firm of Sharps and Hankins concentrated on manufacturing percussion breechloading carbines and rifles for the US army and navy. In 1866, the partnership was ended, and Sharps returned to working under the C. Sharps and Company name, continuing to manufacture his 4-shot pepperbox pistols. Sharps remained in business making these handy little guns until 1874, when he passed away and the business was closed.

The Sharps Pepperbox design was an innovative way to manufacture a repeating  metallic cartridge handgun without running afoul of the Rollin White patent on the bored through cylinder that Smith & Wesson had an exclusive arrangement to use and without violating the Colt patent that controlled cylinder rotation activated by the cocking action of the hammer. Rather than using a single barrel with a rotating cylinder, Sharps used multiple barrels with a rotating firing pin. The Sharps design had a square cross section, with two side-by-side barrels stacked on top of two other side-by-side barrels. While the percussion pepperboxes of pervious decades had utilized rotating barrels, which aligned with the hammer when fired, Sharps design had four fixed barrels that were fired by a rotating firing pin in the single hammer. Each time the hammer was cocked the firing pin rotated one quadrant clockwise to bring it into alignment with the next barrel. The single action pistols had a sheathed spur trigger that moved forward in its sheath each time the hammer was cocked. To load the pistols, the hammer was placed on half-cock to defeat the interlock mechanism (a safety feature not present on all the variations) and a button depressed that released the barrels to slide forward on the frame. The empty cartridges could then be removed from the chambers and fresh cartridges inserted. During production, the location and the style of the release changed, but the basic concept never did. Interestingly Sharps’ 1859 patent also included an extractor system that was never incorporated into any of his pepperbox designs.

Over the decade and half that Sharps produced his little pistols, some 156,000+ would be manufactured in four basic types. They were the Model 1 in .22RF with about 89,000 produced, the Model 2 in .30RF with about 37,000 produced, the Model 3 made by Sharps & Hankins in .32RF Short with about 15,000 produced and the Model 4 (Bird’s Head or “round butt”) in .32RF Short and Long with another 15,000 produced. Within each model were numerous variations based upon small changes in physical design, markings, latch systems and grip material. Barrel lengths varied with each model, in keeping with the frame size and caliber, with the standard length for the Model 1 being 2.5”, the standard length for the Model 2 and Model 3 being 3” or 3.5” and the standard lengths for the Model 4 being 2.5”, 3” or 3.5”. Of course, as with any Sharps product, custom barrel lengths were available by special order and at extra cost. Varnished wood grips were or hard rubber, “gutta percha” grips were standard for most of the production, depending upon the model. The majority of the production was finished with blued barrels and silver plated brass frames, with the exceptions of the Model 1D which had an iron frame, as did the Sharps & Hankins Model 3. It is also worth noting that the Sharps & Hankins version had the rotating firing pin mounted in the frame and not on the face of the hammer. Again, custom order finishes and grip materials, as well as engraving, were all available by special order at extra cost.

The downside to any manufacturing company being run by the inventor of the item being produced is that the inventors need to constantly improve upon his design usually leads to numerous and costly wastes of time as parts are changed, tooling altered, etc. The fact that the very successful Model 1, with more than 89,000 units manufactured was produced in five variations during its 15 years in production attests to this. With some 60,000 Model 1A pistols produced, Sharps’ constant need to improve things meant that that balance of the production went through four additional variations, even though they only represented a third of the Model 1s total production.

The Sharps Pepperbox is one of the most instantly recognizable pistols ever produced, and in addition to the more than 150,000 produced by Sharps, many more thousands were produced around the world, copying Sharps design. Some, like those manufactured by Tipping & Lawden in England or Ghaye of Liège were made under a licensing agreement with Sharps, while others were outright patent infringements and forgeries. The Sharps Pepperbox has honor of being one of the few 19th century firearms designs that is still being produced today, both as reproductions of the mid-1800s gun and as modern variations based upon a long-expired patent design.

Offered here is an about EXCELLENT condition Sharps Model 2A. The 2A was the most produced variant of the Model 2, with about 26,500 manufactured. That represents about 70% of the total Model 2 production, which were produced in a total of five variations. However, despite the production numbers of the Model 2A, it only represents about 17% of total Sharps Pepperbox production. Only two of the Model 1 variations approached the level of production success of the Model 2A; the Model 1C at about 26,000 guns and the Model 1A with about two and half times the production, which exceeded 60,000 guns. The standard production Model 2 had a blued 3” four-barrel cluster, a silver-plated brass frame and either checkered hard rubber “gutta percha” or two-piece varnished walnut grips that were straight where they met the frame, rather than rounded. Another identifying characteristic of the Model 2A was the barrel release at the end of the frame. Both straight and fluted, or beveled areas behind the standing breech of the brass frame were found on Model 2 pistols, depending upon the variation, with the straight breech being most common. The standard markings were C. SHARPS & CO / PHILADELPHIA, PA in a circle around the hammer screw on the right side of the frame and C. SHARPS & CO / PATENT 1859 in a circle around the hammer screw on the left side of the frame. The guns were serial numbered on the bottom of the brass grip frame and on the bottom of the barrel, concealed by the frame when the barrels were not extended for loading or unloading.

This example of a Sharps Model 2A is in about EXCELLENT condition. The pistol is serial numbered 20175 on both the frame and the barrel cluster, placing it towards the end of Model 2A production. The markings on the pistol remain crisp, with the circular frame marks on the right side of the frame being somewhat weak on the bottom portion of the arc, the result of poor die strike, rather than wear or cleaning. The pistol retains about 85%+ of its original bright blue on the barrel cluster, with some thinning and minor loss. The largest area of loss are a pair of fingerprint sized areas on the left side of the barrels where the finish has been worn by the grip necessary for pull the barrels forward. This area has a smoothly oxidized plum brown patina that blends nicely with the remaining blue on the barrels. The barrels are almost entirely smooth with only some minor flecks of surface oxidation present and some pinpricking around the muzzles. The silver-plated frame retains only some minute tarnished traces of silver plating with the exposed metal showing a very attractive butterscotch bronze patina. The hammer and firing pin both retain much of their finish as well, with some nice fire blue remaining. The rotating firing pin functions exactly as it should, rotating each time the hammer is cocked. The breech locking system works correctly, but the pistol does include the interlock safety system that requires the hammer to be placed on half-cock in order for the barrels to be released to move forward. The bores remain in FINE condition. They are mostly bright but show some very lightly scattered pitting along their lengths, typical of rimfire arms from that period, as the caustic priming compound could cause major erosion very quickly. The checkered hard rubber “gutta percha” grips are in about EXCELLENT condition as well. They remain very crisp with sharp edges and checkering, and show no breaks, cracks, chips or repairs. The grips do show some light wear and some minor handling marks but show no damage or abuse. They have a rich chocolate color and have not faded substantially as is common with these grips when they are exposed to sunlight over a long period of time.

Overall this is a really crisp and extremely attractive example of a Sharps Model 2A Pepperbox. The gun remains in a wonderful state of preservation with lots of fine, bright blue on the barrels. This would be a great addition to any collection of pepperboxes, pocket pistols or Sharps firearms and remains in excellent condition.