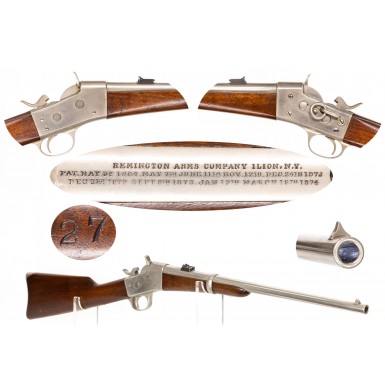 The story of the Remington Lightweight Baby Carbine is convoluted at best and is not definitively known to this day. The exhaustive research of George Layman in his book Remington Rolling Block Military Rifles of the World notes that much of the period records and documents no longer exist, which has made understanding the development and production of the gun difficult to determine. Layman postulates that the origin of the “Baby Carbine” was with the primary competitor with Remington in the Rolling Block market, Whitney.

In 1870 the Whitney Arms Company had purchased the rights to produce a Rolling Block action rifle based upon the patents of T.T.S. Laidley and C.A. Emery. Their overcomplicated design was necessary to avoid running afoul of the original Joseph Rider design patent held by Remington. During the next 18 years, Whitney would produce a variety of Rolling Block models but would never gain the traction of Remington who had been there first and was producing a superior and less complicated product. In 1888, the Whitney firm which was in a dire financial situation sold their assets to Winchester. Winchester’s interest was only in removing the Whitney-Kennedy lever action rifle from the market and thus reducing competition. Winchester then sold the physical assets of the company, including unsold inventory, partially assembled arms, parts, etc to Schuyler, Hartley and Graham of New York. Schuyler, Hartley and Graham had been long time dealers in Whitney firearms and also employed gunsmiths who did custom work, re-worked surplus military arms for the civilian market and would produce special orders of arms for various international customers, if the exact item desired by the client was not immediately available from a supplier. In 1888, Schuyler, Hartley and Graham had also partnered with Winchester to purchase E. Remington & Sons, which had entered receivership. Winchester subsequently sold off their part of the purchase to Schuyler, Hartley and Graham and now the New York City firm owned the newly renamed Remington Arms Company and the remnants of inventory and parts from the primary competitor to Remington in the Rolling Block market, Whitney.

Layman theorizes that the Lightweight Baby Carbine had been introduced by Whitney as examples do exist of this style of gun by them, but they are fairly rare. Remington apparently tried to counter with their version circa 1885 but production was apparently extremely limited and practically no pre-1888 tang marked Lightweight Baby Carbine Rolling Blocks are known. Layman suggests that the original Remington production of the model was for a Uruguayan contract, which may explain their scarcity. However, after the reconsolidation in the Schuyler, Hartley and Graham era, the gun was brought to market again by the new Remington Arms Company.

According to Flayderman’s the initial production of the “Light Baby Carbine” by Remington was in .44RF and then .44 centerfire. However, the versions most often found by collectors is the Winchester .44-40 chambering which was certainly popular around the world during the last quarter of the 19th century. However, as only a few thousand of the guns were produced at most, they are far from common and due to their handiness and light weight are often well-worn when found by collectors today. Standard production was a 20” barreled gun with the lightweight frame with either a full nickel or a blued finish. A smooth walnut stock with crescent butt plate and a smooth forend secured by a single barrel band completed the major components of the guns. The rear sight was the same L-shaped folding aperture sight Remington had used on their New York Contract Rolling Block Carbines. This sight would continue to be the standard Rolling Block carbine sight for the company until production of such guns ceased.

Offered here is a really EXCELLENT condition example of a Remington Rolling Block Light Baby Carbine. The carbine has the usual 20” barrel, the small 4 ¼” long frame, is only 35” in overall length and is chambered for the popular .44-40 cartridge. The carbine is marked in the typical way on the tang for a post-1888 production Rolling Block, reading in three lines:

The only other markings are the “U” on the reverse of the single spring retained barrel band, to indicate the “up” position and the number 27 stamped into the bottom of the forend. The carbine retains its original blued L-shaped leaf rear sight with the short leaf set for 100 yards, the aperture in the longer leaf marked for 300 yards and the top “V” in the long leaf marked for 500 yards. The carbine retains its original tall blade front sight as well as the short staple sling bar and ring on the reverse of the action.

As noted, the carbine remains in EXCLLENT condition with nearly all of the original factory nickel remaining on the metal and only the most minor areas of thinning and loss. The nickel has taken on the sort of milky patina often associated with 19th century nickel finishes that are undisturbed, uncleaned, and untouched. There is some extremely minimal aeras of flaked loss at the muzzle, a couple of tiny areas of flaking along the barrel, and some flaked loss on the face of the hammer. There is some thinned loss at the hammer and breech block spurs where their checkering is, on the curved “rolling” section of the breech block which is the result of wear, and a thumbnail sized area of worn loss at the toe of the buttplate. There is also some minor thinning at the tang where the address and patent markings are, and some thinning on some of the screwheads. The blued rear sight retains some blue with freckled oxidation and is fully functional and clearly marked. The action functions perfectly and the bore is VERY FINE. It remains quite bright with some scattered light oxidation and fine rifling. The wood of the stock and forend show some very lightly scattered bumps, dings and mars from handling and storage with some tiny surface chips at a couple of the wood to metal junctions. Both pieces are solid and free of breaks, cracks or repairs and show no signs of having been sanded, just some dings from being some 120 years old.

Overall, this is simply a spectacular example of a scarce Remington Rolling Block Lightweight Baby Carbine that would certainly please even the most discriminating collector. The gun would be a fine addition to any extremely advanced Rolling Block collection, Remington collection, old-west era saddle ring carbine collection, or simply for any collector who only wants to own the “best of the best”.