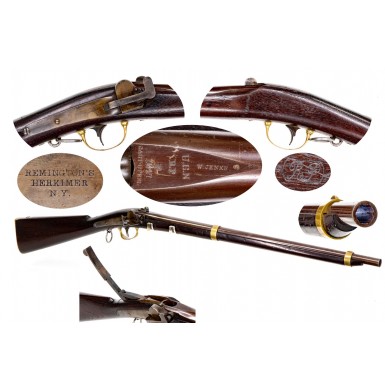 This is an about EXCELLENT example of a very scarce variant of the Remington Jenks US Naval Carbine, as produced by the famous Remington arms company. Between 1843 and 1846 the NP Ames Company of Springfield, MA produced 4,250 of the standard Jenks breechloading percussion carbines for the US Navy. In 1847, an additional 1,000 “improved” Jenks carbines were ordered from E. Remington & Sons of Herkimer, NY, which included the automatic Maynard Patent Tape Priming system. These additional carbines were delivered in 1847 and 1848. The Remington assembled guns were manufactured on the original Ames machinery by Remington, who had purchased the contract for the 1,000 arms, as well as the machinery and all Jenks parts on hand (both finished and unfinished) from Ames. All of the Jenks carbines were originally manufactured as .54 caliber smoothbore guns, with a round loading aperture in the breech. Both versions of the carbine had 24.5” barrels secured by two screw-retained brass barrel bands, walnut stocks and brass furniture. With the coming of the Civil War, nearly all of the carbines were subsequently altered. The round loading aperture which was designed for loose powder and a round ball was enlarged to an oval opening which allowed the loading of paper cartridges. The majority of the carbines were also rifled during the alteration process. Today, it is very difficult to find a smoothbore Jenks carbine and nearly impossible to find an original configuration smoothbore Jenks with the round loading hole. The Jenks carbines manufactured by Remington with the Maynard Tape Primer represented only 19% of all Jenks carbine production for the Navy, and as such are very rare. The Navy preferred this “improved” version of the Jenks carbines and made a concerted effort to issue the tape primer equipped carbines to their small fleet of newly built screw frigates. The carbines were issued for service on the US Navy frigates USS Colorado, USS Merrimack, USS Minnesota, USS Niagara and the USS Wabash. All of these ships were outfitted between 1856 and 1858. According to author and researcher John McAulay, each frigate typically received 70 of the Remington made Jenks carbines. Remington Jenks carbines were also issued to the crews of the USS Congress, USS Cumberland, USS Susquehanna, USS Portsmouth and USS Saranac during the late 1850s. In December of 1858, it was reported that the Navy had 1,359 of 5,400 total Jenks carbines in service, with the belief that the large majority of these guns were of the tape primer variant, since the Navy showed a strong preference for the issue of that particular small arm.

With the beginning of the Civil War in 1861 the majority of the Jenks carbines were altered by rifling. Arthur Eastman & Simon Stevens contracted to alter 2,800 of the Jenks carbines by rifling their barrels. It is believed that they also enlarged the charging hole to the oval shape on any carbine that had not already had that alteration preformed. Clearly other contractors rifled these carbines as well, as the extant number of smoothbore carbines is quite small, indicating that only a very few of the guns escaped this modification. As the majority of the Jenks carbines owned by the Navy were in storage at the various Naval Yards when the war began, it can be reasonably assumed that those carbines which escaped alteration were those on station at remote points of the globe during the time frame that the modifications were performed. While the Navy placed more emphasis on the conventional muzzle loading rifled arms that were preferred by the Army during the Civil War, the Jenks carbine continued to be issued and to see significant use throughout the entire conflict. As a result, finding a high condition, tape primer equipped Jenks carbines can be very difficult.

This Remington-Jenks “Tape Primer” Naval Carbine is in about EXCELLENT condition and is one of the finest examples that I have ever seen. The gun retains about 90%+ of its original lacquered browned finish on the barrel, which shows some areas where it has thinned and faded, mostly along the high edges, around the breech lever and breech opening and at the muzzle. There is also some lightly oxidized freckling and age discoloration scattered along the barrel, mixed with the original brown lacquer finish. The most evident areas of this surface oxidation and minor roughness is around the muzzle area and extending back towards the upper barrel band. There are a couple of minor spots where the finish has turned to a more plum color due to handling as well. A couple of minor surface finish scratches are present on the barrel, which should be visible in the photos. All of these are the very minor imperfections on a truly stunning gun with nearly all of the original lacquer brown finish on the barrel. The .54 caliber rifled bore is in about FINE condition. It partly bright with excellent, crisp rifling and shows only some very lightly scattered pinpricking along the length of the bore, primarily in the grooves. There is also some old fouling in the grooves and a good scrubbing would likely improve the condition of the bore and bring it close to “excellent”. The lock retains about 90%+ of its original vivid case coloring. There are some areas of the lock where the finish has faded towards a slivery-gray patina, but only along the high edges and contact points. The lock is really gorgeous, with lovely mottling of blues, browns and purples. All of the metal is smooth and virtually pit free, with only some very tiny scattered areas of minor pinpricking, most of which is confined to the muzzle and the breech area. The action of the gun is mechanically excellent, and both the mule ear hammer and mechanized tape primer system are complete and function crisply, exactly as they should. The cam action breech lever functions perfectly as well and moves quite smoothly. The breech lever retains about 75%+ of its original dark oil quench blue-gray case coloring, with the loss due to fading and handling at the contact points and edges. The lock plate is clearly marked in three horizontal lines:

The interior of the tape primer door is numbered 90, no doubt a Remington assembly number used to count the primer apparatuses and the carbines built and track patent payments to Edward Maynard. The inside of the breech lever is numbered 3 / 29, which is probably an assembly number as well, likely matching similar numbers concealed in the action or stock. The number may also be a means of tracking the number of Jenks actions produced for the purposes of paying patent royalties to William Jenks. All of the brass furniture has a lovely, untouched medium golden colored patina. The rear of the triggerguard tang, the buttplate tang, the forward edges of the barrel bands, the rear of the action and left barrel flat are all marked with a tiny version of the P inspectors’ mark found on the breech. The walnut stock rates VERY FINE+ to NEAR EXCELLENT and is full length, solid and free of any breaks or repairs. This stock is extremely crisp throughout with sharp edges at the barrel to stock junction. The stock shows the expected handling marks, bumps and dings from service, use and storage. There are a handful of scattered surface scuffs as well. There are a couple of tiny chipped dings on the upper edge of the stock at the top edge of the barrel channel on the reverse, about 4” from the breech. This is the only real “damage” to the stock. The left flat, opposite the lock, has an excellent and very clear RPscript inspectors’ cartouche. This is the mark of civilian arms inspector Richard Paine, who inspected Naval small arms from 1839 to 1848. Other than the scattered minor bumps and mars, the stock remains extremely crisp and shows no signs of sanding or any kind of abuse.

Overall this is simply an outstanding example of a very scarce, Remington-Jenks Naval Carbine. Only 1,000 of these carbines were produced and most saw long term sea service, making it difficult to find fine condition examples. This is a truly wonderful and extremely crisp example of a gun that is missing from even the most advanced Civil War carbine or Naval collections. This gun is 100% complete and correct and retains nearly all of its original finish. In fact, the condition of the carbine is such that it would be very difficult to upgrade from this example. This gun will be an exceptional addition to an advanced Civil War naval or carbine display and is a gun that the new owner will be extremely proud of.