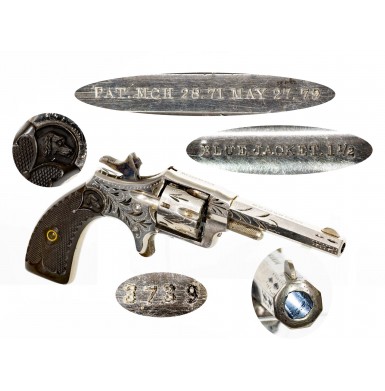 In 1867 Charles W. and Samuel S. Hopkins, along with Charles H. Allen purchased the faltering Bacon Manufacturing Company of Norwich, CT, there by establishing the Hopkins & Allen Manufacturing Company. Charles Hopkins had previously worked as a gunsmith at other area firearms manufacturing companies including Allen & Thurber, the Bacon Manufacturing Company and at the Manhattan Firearms Manufacturing Company. Henry Hopkins had also been an Allen & Thurber employee. As the company tried to expand during the late 1870s several other “Hopkins” and “Allen” named individuals appear on the company rolls as employees, an attorney and on the board of directors. Charles Converse, a major player in the now defunct Bacon company was also a principle in the new firm. The company was responsible for a number of American firearms patents, including at least three that pre-dated its inception, including a May 27, 1862, patent by Charles W. Hopkins for a swing-out cylinder, another swing-out cylinder patent issued on January 5, 1864, to Briggs & Hopkins and a pepperbox patent issued August 28, 1866, to Converse & Hopkins. In all, some 17 patents would be held by the company during its lifetime, some of which were contributed by men who are better known for firearms that bear their own names, like W.A. Hulbert of Merwin, Hulbert & Company and J.M. Marlin who would later start Marlin Firearms. The men at Hopkins & Allen were particularly savvy about the firearms business, and in addition to being mechanically minded and capable of turning out high quality arms, also realized that their manufacturing capabilities allowed them to produce guns for other companies that had a design they wanted to offer for sale but did not have the manufacturing facilities to produce them. Today, this type of operation, where a company makes parts or products for several different brands is known as “OEM” (Original Equipment Manufacturer). During the latter part of the 19th century, Hopkins & Allen acted as the OEM contractor for a few well-known gun companies, most notably Merwin, Hulbert & Company, and the Evans Repeating Rifle Company.

In 1874 Charles Converse sold his ownership in the company to Joseph Merwin (of Merwin, Hulbert & Company) and the association between those two firms was established until Merwin, Hulbert & Company went out of business in 1892. Hopkins & Allen produced all of the various firearms models marked by Merwin, Hulbert & Company, and based upon period reports and extant examples, the guns were very well made and of very high quality. Around 1877, after they had gained experience in manufacturing large frame revolvers for Merwin, Hulbert & Company, Hopkins & Allen introduced their own line of large frame, single action revolvers to compete with Colt and Smith & Wesson, the two major American handgun manufacturers of the period. These guns constituted the “XL No 8” line of handguns, which included the XL Army (.44 caliber, both rimfire & WCF), XL Navy (.38 RF caliber) and XL Police (also .38 RF caliber). It is believed that a total of 2,700 of the large framed XL No 8 revolvers of all models were produced by Hopkins & Allen between 1877 and 1885. Despite these large frame revolvers being well made and attractively priced when compared to their more famous competition, the large frame guns were never commercially successful. It is likely that their reputation for producing inexpensive “suicide special” handguns undermined their ability to successfully market the XL No 8 series. It is generally believed that this same issue was responsible for the inability of the Merwin, Hulbert & Company revolvers to attain the success of their Colt and Smith & Wesson competitors. As a result, production of the XL No 8 line was discontinued in 1885, although it is likely that unsold revolvers remained in inventory for some time. Merwin, Hulbert & Company failed in 1892 and six years later Hopkins & Allen was forced into bankruptcy. The company was reorganized as the Hopkins & Allen Firearms Company, but failed to achieve the financial success they had known during the 1870s and 1880s. In 1914 the company was sold to the Marlin-Rockwell Arms Company, and ceased to exist.

Offered here is an EXCELLENT condition example of a Hopkins & Allen Blue Jacket 1 ½ Revolver, a classic mainstay of the Hopkins & Allen line of pocket revolvers. Thousands of these revolvers were produced from their introduction circa 1879 through the turn of the century. Like most Hopkins & Allen revolvers, the guns were produced with a variety of barrel lengths and could be acquired in several “trim levels”, ranging from the basic plain nickel finish to enhanced finishes, the addition of engraving, higher grade grips, etc. This revolver is a factory engraved example with the serial number 3739. The serial number is located under the barrel, where it is concealed by the cylinder arbor pin, and on the lower left side of the frame, under the grip panel. The right grip panel is also scratch numbered to the revolver on its interior. The revolver has the standard factory nickel finish and checkered hard rubber “Dog’s Head” grips, much like those found on some Merwin, Hulbert & Company pocket revolvers. The gun has a 2 ¾” octagonal barrel and a seven shot half-fluted cylinder. The single action revolver has a color casehardened hammer and spur trigger with a checkered finger pad. The topstrap of the revolver is clearly marked BLUE JACKET 1 ½, with the number being a reference to the Hopkins & Allen frame size. As mentioned above, when discussing the “Army” revolvers, the largest frame size was the No 8. The only other external marking is the patent information on the top barrel flat which reads in a single line:

As noted, the revolver remains in EXCELLENT condition and is factory engraved. The engraving covers about 80% of the gun, with simple deep flowing foliate themes and simple geometric boarders and lines, some swooping flourishes and some simple punch dot shading and patterning. Other than the deep foliate cuts, the simpler portions of the engraved decorations resemble some of the Merwin, Hulbert & Company “Intaglio” engraving. Like some of the Merwin, Hulbert & Co. decorations, the deeply cut portions of the engraving on this gun contrast with the nickel finish due to the addition of blued finish in the cuts.

The revolver retains about 92%+ of its original factory nickel finish. The finish shows some very minor areas of flecked flaking, mostly around the sharp edges of the frame above, below and in front of the cylinder as well as on the face of the cylinder. There is also some very lightly scattered minor surface oxidation and discoloration present, mostly in the cylinder flutes. The cylinder arbor pin shows some moderate finish loss, primarily from handling of the sharp checkering from insertion and withdrawal. The pin also shows some loss from wear along the points of rotational and locking bolt contact. The hammer retains about 90%+ vivid case coloring with only some minor high edge wear and loss, and the casehardened trigger retains traces of its coloring with most of the finish having dulled and faded to a smoky bluish patina. The revolver is mechanically EXCELLENT and functions crisply and correctly on all positions. The revolver times, indexes and locks up perfectly. The bore of the revolver is in VERY GOOD condition and retains strong rifling. The bore is about half bright with scattered oxidation and discoloration along its length, as well as some scattered areas of light pitting. The original front sight is present on the top of the barrel near the muzzle and all of the screws remain in very good or better condition, with all retaining much of their finish and showing minimal slot wear. The hard rubber grips are in EXCELLENT condition as well. They are solid and complete and free of any breaks, cracks, chips, or repairs. The impressed checkering remains very crisp, and the grips fit the frame perfectly. The grips have a rich chocolate brown color, typical of 19th century hard rubber that tends to turn brownish over time from its original black color. Other than this minor fading towards dark brown the grips are in about the same condition as when the revolver was originally manufactured.

Overall, this is a really stunning example of a lovely and desirable American-made “Suicide Special” pocket revolver from the height of American westward expansion. Revolvers of this type were much more likely to be owned and carried by the typical American during the late 19th century than the large frame holster guns from Colt and Smith & Wesson. Although produced in large quantities, the very nature of their inexpensive price and intended use means that high condition examples of these guns are relatively scarce. Likewise, the higher end, embellished examples are rather scarce as well. This is a really lovely example that would be a fine addition to any serious collection of 19th century American-made pocket cartridge revolvers and would be a very difficult gun to improve upon in terms of condition or overall eye appeal. The gun was formerly part of the famous gun collection of the late Owsley Brown Frazier and was part of the collection of the Frazier Historical Arms Museum in Louisville, KY, which is now the Frazier History Museum. I am absolutely sure you will be very glad that you added this attractive little revolver to your collection of pocket revolvers.