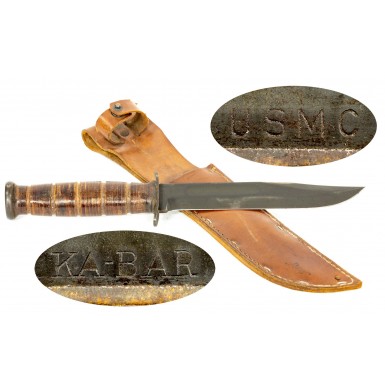 There is probably no US fighting knife more associated with the war in the Pacific theater than the US Navy Mk 2 pattern combat knife, better known to the Marines who carried it at the KA-BAR. Marine Lieutenant Colonel Clifford H Shuey designed the USMC 1219C2 Combat Knife (later re-designated as the USMC Mark 2 Combat Knife) and eventually simply as  “Knife, Fighting Utility” in 1942 and it was officially adopted in November of that year. The knife had a 7” clip-point, Bowie-style blade with steel cross guard and a hilt made of stacked leather washers. The overall length of the knife was 12” and the blades were blued, blackened, parkerized or plated, depending upon the manufacturer; and in some cases when the manufacturer produced the knives. Pommel caps were secured by a variety of methods, including screwed on washers, peened tangs and pinned tangs, just to name a few. Some of the makers even used different methods to secure the pommel cap to the knife tang during the course of their production runs. The initial deliveries were made by the Union Cutlery Company and were marked with their trademark name KA-BAR. Even though the knife was produced by three other companies during the war, the Marines referred to the knives generically as the “KA-BAR”, and still use that name for their fighting-utility knife today. The knives began to be issued to the Marines in early 1943.

While the Navy version of the knife was marked USN or USN Mk 2 on the blade and had the makers name on the opposite side, the Marine Corps knives were marked USMC on one side of the ricasso and with the makers name on the other side. Early US Navy knives were issued in leather sheaths, which were eventually replaced by composite sheaths by early-to-mid 1944. The salt air and sea spray that the navy knives were exposed to was very tough on the leather scabbards, so the composite scabbard was a better choice for long term use in such an adverse environment. Amazingly, even though the Marine knives saw use in equally harsh conditions, the Marines utilized leather sheaths throughout the entire war. Due to problems in the field with broken blades, the government ordered that the markings be moved from the blade ricasso to the cross guard in 1944. As a result, the early, blade marked knives are less common and more actively sought after than the later production, guard marked knives.

This particular USMC 1219C2 Combat Knife was produced by the Union Cutlery Company of Olean, NY and is in about EXCELLENT condition. The obverse ricasso is crisply marked USMC and the reverse ricasso is clearly marked in a single line: KA-BAR. The knife has a thinner pommel cap and pinned tang, which is typical of the earliest and latest production KaBar marked knives. The pinned tang and “KA-BAR” mark without the address line indicate was the final WWII period production version of the knife. Only these late war KABARs were produced with the pinned pommel cap. The blade still retains about 95%+ of its original parkerized finish, with the only real loss of finish being high edge wear from insertion and removal from the scabbard. The blade is in about EXCELLENT condition. It shows essentially no use and retains its original factory edge with no additional sharpening along primary or false edge of the blade. The blade is almost entirely smooth and shows no pitting, but a small amount of very minor freckled oxidation is present at the base of the ricasso, where the blade meets the guard and hilt and on the face of the guard. This is probably the result of moisture at the throat of the scabbard and dirt and dust building up at the blade to hilt juncture. The steel crossguard is in wonderful condition and shows none of the often-encountered bends that are quite typical of these knives. The pinned pommel cap retains about 50%+ of its original finish, with some thinning and fading, as well as some lightly scattered flecks of oxidation. The leather washer hilt is in about EXCELLENT condition as well and shows only some light scuffing to the finish, the result of handling and use. The leather is free of any gouges or dings and has a smooth, dark brown surface, retaining much of its original finish as well. The knife is accompanied by its original leather scabbard. The scabbard is in about EXCELLENT condition as well. The scabbard is sewn and reinforced with steel staples, which is correct for a much of the blade marked Union Cutlery “KaBar” USMC knife production, although Union Cutlery used more scabbard variations than any of the other USMC knife makers. Some of the early production knives were produced with riveted scabbards that are typically associated with the Pal Blade Company knives. The scabbard is unmarked, which is the case of most USMC scabbards. The ones that are maker marked and / or USMC marked are extremely scarce and are very highly sought after. All of the original scabbard stitching remains intact and is tight and secure. The leather scabbard shows only some light scuffing and lightly scattered areas of minor discoloration and finish loss. All of which appears to be due simple age and handling.  The belt loop remains in fine, solid and fully usable condition as well. The original leather hilt-retaining strap is present, complete with its fully functional blackened brass snap. The brass snap retrains the majority of its original blackened finish with some thinning and loss from handling and age. The snap is 100% complete and fully functional. All nine of the original reinforcement staples are present in the scabbard and remain solidly in place. The staples have a mostly bright steel patina with some lightly scattered surface freckling and minor surface oxidation.

Overall this is a really outstanding, early production KA-BAR marked example of the classic USMC “KaBar” fighting knife. The knife is in excellent condition and shows no use, abuse or damage. The knife is extremely attractive and displays wonderfully. As the blade marked knives with the pinned pommels were the earliest production of the Union Cutlery knives, and saw the most service, they are extremely difficult to find in anything but well-used condition. The original leather scabbard remains in wonderful condition as well and matches the knife perfectly. This is a really excellent complete set of a USMC fighting knife and scabbard, circa early-1943. It would be an outstanding addition to any WWII edged weapons collection, especially one that focuses on the US Marine Corps. The condition is such that it would be extremely difficult to upgrade this knife.