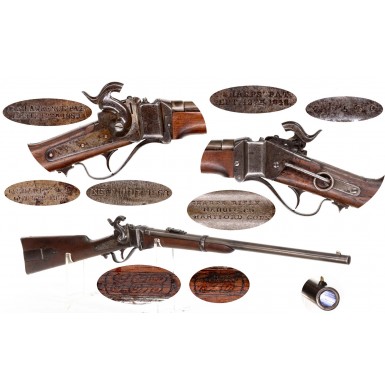 The Sharps Breechloading Carbine, in both the New Model 1859 and New Model 1863 configurations, was the most used carbine to see service with the United States Cavalry during the American Civil War. From their initial delivery to the Ordnance Department in September 1861, through the end of the war, the Sharps Rifle Manufacturing Company delivered a total of 77,330 of the Sharps percussion breechloading carbines. Throughout the war, the Sharps outnumbered the other carbines in the field by as many as about 6 to 1. According to the December 1862 Ordnance Department returns, there were already 13,645 Sharps in the field, with the Smith Carbine being the next most issued carbine in the field at 1,922. The September 1863 Ordnance Department returns showed similar numbers with 20,378 Sharps in the field, with the next most issued carbine in the field at that time being the Burnside, of which 8,179 were in service. While the Spencer Carbine was eventually issued in very large numbers during the last eighteen months of the war, no carbine ever superseded the Sharps for overall numbers, quality, and durability. Field reports regarding the service of the Sharps carbine during the war were almost entirely positive, with very few negative reports noted.

The Sharps carbine offered here is an attractive and essentially untouched Transitional New Model 1863 Carbine. The gun is one of the early New Model 1863 carbines that were delivered with the patchbox in the buttstock. Sharps rifle and carbine production used a sequential serial numbering system that numbered the receivers consecutively irrespective of the actual model. Due to this system the serial number ranges of New Model 1859 and New Model 1863 carbines overlap, with the NM1859 variant being listed as having been produced in the 30,000 to 80,000 serial number range and the NM1863 carbines being listed as having been produced in the range of 71,235 to C,49528. The gun is serial numbered 72,540 on the tang of the action and on the bottom of the barrel, under the forend. This serial number is only 1,305 above the 1st New Model 1863 Carbine produced, and as the NM1859 was being produced simultaneously and in the same serial number sequence with the newly introduced NM1863, this is probably one of the 1,000 NM1863 Carbines produced. A quick look in the four books of US military firearms serial numbers published by the Springfield Research Service does not result in a direct hit for this serial number, but does list the gun one number below it, #72,539. That gun was listed as being in the possession of Troop B of the 2nd Illinois Cavalry in 1864. While some dealers would call this a “range match” and suggest this gun was issued to the same regiment, I would note that it is possible but certainly not definite. In fact, the four closest numbers to this gun that were listed in the books were #72,500, #72,539, #72,551 and #72,556. These guns were issued to four different regiments, including  Troop D of the 19th Pennsylvania Cavalry, Troop B of the 2nd Illinois Cavalry, Troop I of the 10th Ohio Cavalry and Troop B of the 10th Illinois Cavalry, respectively. So, in a range of less than 60 serial numbers four different regiments are represented. The most interesting piece of information gleaned from the books was that #72,556 was in possession of the 10th Ohio Cavalry by October of 1863, suggesting that this gun was also likely in the field by the fall of 1863.

The gun is well marked throughout with all of the standard markings present and fully legible, although the primary lockplate marking is a little light. The lockplate is in two locations. On the upper portion of the lockplate, behind the hammer is marked in two horizontal lines:

The lock plate is also marked in two horizontal lines on the rear portion, behind the hammer:

The left side of the receiver is marked in two lines:

The Sharps and many other Civil War period US contract were cartouched by the inspectors on the reverse wrist, often near, above or below the sling bar. As a result, finding a Civil War contract carbine with clear, legible cartouches is often difficult as the sling ring and snap hook often wore the marks off of the wood. This gun retains two very visible and partly legible inspector cartouches. The cartouche above the sling bar is a three-letter script cartouche that I cannot read and which  I can find no match to in U.S. Military Arms Inspection Marks by Daum & Pate. The mark below the sling bar is a somewhat weaker script GC, which is the mark of armory sub-inspector George Curtis. Curtis’ block GC initials are also found on the left barrel flat near the receiver and on the sling bar mounting plate.

This Transitional Sharps New Model 1863 Carbine is in VERY GOOD condition overall. As mentioned, the receiver and barrel serial numbers match and the markings are all present and mostly very clear and legible. The barrel has a mostly smooth grayish-brown patina on the exposed surfaces with some blue remaining under the barrel where it has been protected by the forend. The color casehardened frame and furniture have a moderately oxidized, mottled chocolate brown over gray patina. There are some minute traces of case color in some protected areas on the receiver and lockplate. The metal is primarily smooth with some scattered areas of pinpricking and light pitting here and there on the barrel and receiver and some scattered freckled patches of oxidized minor surface roughness on the frame and receiver. The oxidation has made the serial number on the receiver tang a little difficult to photograph, but it remains fully legible in person. The carbine appears to be 100% complete and correct. The carbine retains the original Lawrence patent ladder rear sight, original front sight base with a brass blade that shows some moderate wear and the original sling bar and suspension ring. The action works perfectly and still functions crisply and correctly on all positions. The original Lawrence patent pellet primer system is in place and appears to be complete and functional. The bore of the carbine is in about VERY GOOD condition. It is partly bright with some scattered oxidation and discoloration but retains crisp rifling along its entire length. The bore shows some evenly distributed light pitting along its length, primarily in the grooves. There are a couple of small areas of more moderate pitting, but these do not detract and will not likely affect accuracy. The stock is in NEAR VERY GOOD condition. The stock shows the remnant of some old, applied finish, probably some varnish, that was removed at some point in the past.  The butt has also been sanded at some point long ago. The stock shows moderate wear and a number of deep dings and some chipping along the left side of the comb. The stock also shows a few minor surface grain cracks, primarily on the reverse near the wrist and continuing towards the butt. As would be expected the buttstock shows scattered bumps, dings, and mars as well. The forend is in much better condition, rating about VERY GOOD+ with less wear and no significant mars, only the usual assortment of minor dings and handling marks. The forend has as small C sub-inspection on the flat at the receiver junction. This is also likely the mark of George Curtis, who marked the barrel and sling bar with his GC initials and the lower reverse wrist of the stock with his scrip GCcartouche.

Overall, this is an attractive and solid example of a Transitional Sharps New Model 1863 Carbine. The gun retains nice markings, two cartouches and is an early production NM1863 that retains the iron patchbox in the butt. As the most used cavalry carbine of the American Civil War, a Sharps is “must have” for any general Civil War long arms collection and in particular is a necessity for any collection of US Cavalry firearms. This gun has a nice look and were it not for the buttstock wear would rate even better in terms of condition. This is a nice example you will certainly be proud to display.