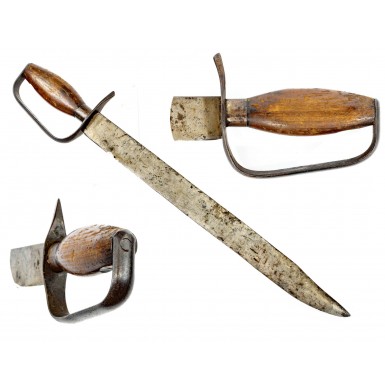 There is probably no more iconic Civil War image than that of the young Confederate soldier, heading off to war with an absurdly large fighting knife in his hand or on his belt. Early war southern ambrotypes and tintypes provide us a dizzying array of large, wicked, and sometimes comical fighting knives of all descriptions, often made by local blacksmiths for the boys of 1861 to take to war. The classic southern fighting knife was usually quite large and robust, with an overall length that was typically between 12” and 24” and with blades that usually varied from 8” to as long as 18” or longer! These knives often incorporated large “D” shaped guard, lending that nickname to many of these Confederate made fighting knives; “D Guards.”

Over the years, the majority of the local knife makers have remained anonymous, although sometimes certain traits and characteristics of surviving knives can help us to make general statements about the likely region or state that an unmarked knife may have originated in. More recent scholarship has allowed us to identify some knives as to their maker, even though they bear no markings. This research has also allowed us to identify several groups of otherwise unmarked knives as the output of more than a dozen specific southern arsenals and manufactories, suggesting that many of the knives were produced in numbers much larger than the number of surviving examples indicates.

One such identified group of southern knives are those that are attributed to the Georgia State Arsenal in Milledgeville, GA. This was actually a complex of three buildings in Milledgeville, each with a different purpose. One was the old penitentiary, which became a manufactory for a variety of arms, including muskets and bayonets. The magazine was for the storage of gunpowder and explosive ordnance. The last building, the “arsenal” was a storage location to which a variety of arms and equipment were delivered by contractors for storage and eventual issue. According to the research of Josh Phillips and the work of his contributors in the book Confederate Bowie Knives, we have a clear picture of the Georgia State Arsenal in Milledgeville, a clear understanding of their operation and we also know that the knives attributed to this site were produced by a variety of contractors; the knives were not produced on the arsenal grounds. His research reveals that the knives were produced based upon a pattern supplied to the various makers, and nearly 5,000 fighting knives were delivered to the Milledgeville site during the spring and summer of 1862. The deliveries were by some fifteen makers who ranged from wagon makers and blacksmiths to gunsmiths and actual cutlers. At least six of these contractors delivered more than one lot of knives, the two largest makers being Monroe, GA wagon maker R.J. Hughes delivering some 1,469 knives and J.W. & L.L. Moore of Atlanta delivering 1,183. These two makers represent more than half of the total of 4,909 knives delivered during this period and help to explain the consistency of the known example. Despite being provided specifications for the knife, there was certainly some variation in the products turned out by the various makers, based upon the availability of raw materials, the skills and available tools of the makers, and likely any chances the maker saw to cut corners to maximize their profit. The contract price paid for the knives was $4.60 each, and any small cost savings meant more money in the maker’s pocket. Phillips and his colleagues have identified seven “types” of Georgia Armory Knives, with some of the variations being delineated by small differences in the construction or appearance of the knives. All are iron mounted “D Guard” pattern knives that nearly all had wood grips. The clip point Bowie style blades varied in length from slightly more than 15” to slightly over 18”, based upon their typology. The overall length of the knives varies from slightly over 20” to around 23”, with the differences being mostly attributable to the blade lengths. Other minor differences that were considered in the development of the typology were the shape and contour of the D-shaped guard, the style of the quillon, the shape of the wood grip and the presence or lack of an iron ferrule behind the guard. The scabbards appear to be very consistent “arsenal” production and were typically of leather seamed along the lower edge with tin mountings.

Offered here is a VERY GOOD example of a Georgia State Arsenal Type I D-Guard Fighting Knife. These knives were produced with single-edged, clip-point Bowie blades that varied between about 17” and 18.5” and an overall length that varied between about 22.5” and 23.5”. The iron guards had a rounded profile along the lower edge and had a tapered, slightly forward-swept quillon. The wood grips were oval in cross section with a bulbous palm swell and were reinforced with an iron ferrule behind the guard. The blades had a full-length tang that passed through the face of the guard and rear of the guard and were neatly peened in place.

This example measures 23.5” in overall length with an 18.125” long blade. The blade has a 3.75” false edge that is ground to be a functional edge and the blade measures 1.5” wide at the ricasso. The blade is .194” thick at its thickest point, well within the standard variance of known example blade thicknesses which range from .1875” to .21875”. The bulbous walnut grip is 5” in length and swells to a maximum thickness of 1.6” at the swell and minimum of .95” at the .71” long iron ferrule behind the guard. The guard is about 1” from the maximum swell of the grip and 1.5” from the ferrule. The quillon is 1.55” long and tapers to a subtle point and is gently forward-swept.

The knife remains in VERY GOOD condition. The blade has a dull pewter patina and shows scattered splotches of oxidation and age discoloration. The blade shows some very lightly scattered pinpricking and some minor surface roughness from the oxidation, as well as some minor sharpening marks. The edge of the blade shows some small scattered nicks and dings. The guard has a thickly oxidized brown patina and the ferrule has a deeply mottled brown over gray patina. The grip remains solid with no breaks, cracks or repairs. However, it does show scattered nicks, dings, scuffs and surface mars, as well the typical expected wear from handling and use. There is what appears to be a small chip that may have been intentional at the bottom rear of the grip that seems to index the pinkie when the knife is held. The grip and guard remain solidly secured to each other, but the knife blade shows some minor lateral wobble as the peen has broken loose at the rear of the hilt and although the blade remains tightly secured to the hilt, there is some minor rotational movement between the blade and grip.

Overall this is a solid, completely authentic example of a scarce and desirable identifiable pattern Confederate D-Guard Bowie knife that was delivered to and issued from the Georgia State Arsenal in Milledgeville. This would be a fine addition to any collection of Confederate fighting knives and would be a wonderful addition to a Civil War collection that concentrates on Georgia and deep south produced arms. For a collector who has always wanted to add a legitimate Confederate bowie knife to their collection, this would be an excellent addition as it is a well documented southern arsenal pattern knife that displays wonderfully.