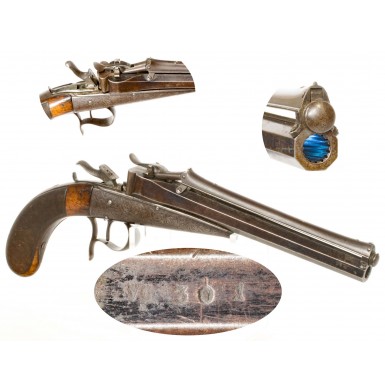 During the mid-19thcentury, the initial experimentation with and development of self-contained ammunition and repeating firearm designs was taking place around the world. These developments were often taking place on parallel courses in different countries and in some cases were coming to market nearly simultaneously. While Casimir Lefaucheux had developed the self-contained pinfire metallic cartridge in 1836, additional experimentation was taking place with other designs as well. One such alternate design, was a series of caseless, self-contained ammunition that came to be known by its American inventor’s title, the Rocket Ball. Walter Hunt’s 1848 design combined a small propellant charge in the concave recess of a lead projectile, which was ignited by an external primer. This was the first tentative step towards creating a caseless self-contained cartridge. His design was originally intended for use in a rifle of Hunt’s design, but which never really went into production. The design rights were subsequently assigned to George Arrowsmith, a machinist and model maker, whose employee Lewis Jennings substantially improved the original Hunt “Volition” rifle design. The resulting Jennings rifle design was contracted to be produced by Robbins & Lawrence, where three men who would become known as some of the greatest American 19thcentury gun designers were employed at that time: B. Tyler Henry, Horace Smith and Daniel Wesson. They all worked to improve the Hunt and Jennings concepts with the improved Smith-Jennings Rifle design becoming the basis for Smith & Wesson’s subsequent lever action repeating pistol, the line of Volcanic lever action pistols and carbines, and eventually the Henry Rifle which would evolve into the Winchester. While the Smith-Jennings design requited external priming per the original Hunt ammunition design, an improved cartridge that combined the primer and the powered in the bullet base was developed that made the Smith & Wesson and Volcanic firearm designs possible. By 1854, Smith & Wesson were producing their new pistol using their improved “Rocket Ball” ammunition, under their own name.

Nearly simultaneously in Europe, French and Belgian inventors Loran, Gaupillat and Fusnot were all experimenting with their version of the “Rocket Ball” concept. In some cases, these designs were really for “parlor” ammunition, where the bullet cavity contained only a priming compound, which also propelled the bullet with moderate velocity for a short distance. The availability of this type of ammunition allowed Belgian arms inventor and manufacturer Victor Colette (b. 1836-d. 1909) to design a twenty-round, “high capacity” repeating pistol circa 1852. He received a Belgian patent for his design in 1857, and today that pistol design is known to the collector world as the Colette Gravity Pistol. While Colette produced a wide array of cartridge  arms during his working period (circa mid-1850s through the 1880s), most were of rather conventional designs and typically used pinfire ammunition. However, it was his Gravity Pistol design for which he is famous.

The Gravity Pistol was a somewhat unique magazine pistol design that was ingenious in its simplicity, but much like the Smith &  Wesson and Volcanic repeating pistols was handicapped by the inherently weak ammunition that it used. Like the Smith & Wesson and Volcanic designs, a horizontal tubular magazine was utilized to contain the ammunition. Unlike the American designs, the magazine was located over, rather than under the barrel. While the US designs used a spring to tension the ammunition and feed it onto a cartridge lifter, the Colette design used no mechanical feed system, simply gravity, as the pistol’s name implies. When the handgun was held with the muzzle oriented upward, the Law of Gravity provided the energy to feed a cartridge from the magazine into the chamber. Cocking the action of the pistol raised the enclosed chamber, aligning it with the magazine tube and moving the closure flap that kept the magazine closed, out of the way. After a cartridge fed into the chamber, it automatically returned to the lowered position and aligned  it and the cartridge with the barrel. The gun was then ready to fire. The Colette pistol took its styling and overall silhouette from the popular European single shot target pistols of the day. The guns were generally unmarked, with the exception of Colette’s VC initials and a serial number and occasional proof marks. The frames were often engraved in the European fashion with flowing foliate scrolls and the grips were often checkered walnut, although smooth fluted grips in the style of Francotte and Flobert. The action  was “single action”, in that manually cocking the hammer prepared the pistol for shooting, with a pull of the trigger being the only act needed to discharge the round. The pistol design incorporated a sliding safety around the box lock style hammer, a system that had been popular on European pistols since the flintlock period during the latter part of the 18thcentury. The large “holster sized” Colette pistols were nominally .44 caliber, or about 11.2mm or 10mm (nominally .40 caliber), with the guns also produced in 8mm (nominally .31 caliber) and 6mm (nominally .24 caliber). Most of the surviving examples are chambered for the two larger calibers, although the smaller caliber guns were produced, primarily as pocket sized pistols. Single shot, target models were also produced. While the Colette’s pistols experienced moderate success in Europe, their production was rather limited and surviving examples tend to be fairly scarce. This can likely be attributed to the fact that that the  ammunition was of limited utility, did not tend to travel or store well and was obsolete by the end of the 1860s as more robust metallic cartridge ammunition became available. As a result, the guns quickly became obsolete anachronisms by the 1870s, meaning they were no longer of any particular value or utility to their owners.

Offered here is a FINE condition example of a rare Colette Gravity Pistol. The pistol is nominally 13 ½-inches in overall length, with an octagonal barrel that measures 8 13/16-inches in length to the face of the moving chamber and 9 1/8-inches including the chamber. The very small chamber length, only about 5/16 of an inch, shows how short the ammunition was, inherently limiting the amount of propellant charge that could be used in the base of the bullet. The bore of the pistol is nominally 10mm and is rifled with 14 narrow lands and grooves. The pistol is unmarked with the exception of  Victor Colette’s initials VC under the barrel, followed by the serial number 301. The frame of the pistol is expertly engraved with tight foliate scroll patterns that are shaded with lines in the European fashion. The one-piece grip is of finely checkered figured walnut and the pistol is finished with a high quality blue.

As previously noted, the pistol is in FINEcondition. The gun retains about 30%+ of its original bright blue finish, most of which is on the barrel, magazine tube and in the protected areas of the pistol. The frame retains only traces of blue with smoky bluish-gray patina over most of the frame. All of the engraving on the frame remains tight and crisp, with the VC 301mark under the barrel remaining crisp and clear as well. The metals shows some very small flecks of scattered surface oxidation and some scattered hints of minor pinpricking. Otherwise, the metal remains crisp and free of any real pitting. The action of the pistol is mechanically excellent with the action operating exactly as it should with no mechanical issues. The safety mechanism remains fully functional as well. The only condition issue worthy of note is that the long, narrow firing pin hammer nose has broken, leaving only the firing pin base and part of the pin. As the firing pin is removable, this would be an easy fix for a competent restoration gunsmith, if the new owner would like to have the missing ½-inch to ¾-inch of the pin restored. The  bore of the pistol remains in FINE condition  and is mostly bright with crisp rifling, showing only some lightly scattered oxidation and some very minor pitting. The checkered walnut grip remains in FINE condition as well. The checkering remains clear and crisp with only some light handling marks and minor wear, as well as some scattered bumps and dings. The grips are solid and complete and free of any breaks, cracks or repairs.

Overall, this is a really FINE condition example of  a scarce Colette Gravity Pistol. The pistol remains 100% complete and original, with the only minor exception being the broken firing pin nose. The gun remains mechanically excellent and  has a fine bore. While these rare pistols do appear on the market from time to time, rarely do they appear with any finish on them, as they have usually been cleaned to bright in the European fashion. This one is untouched and uncleaned and retains some very nice original blue. For any collector of early cartridge pistols, unique actions or the curious firearms developments that helped lead to more modern and successful designs, a Colette Gravity Pistol is a must have item. This is a particularly fine and attractive example that  you will surely be proud to have added to your collection.