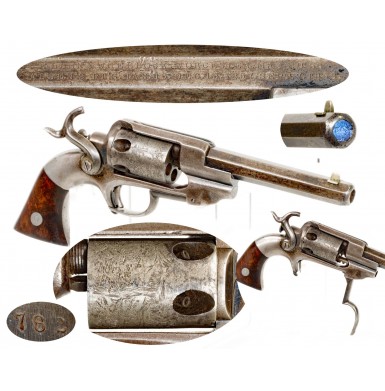 This is a lovely example of the diminutive Allen & Wheelock Side Hammer Pocket Revolver. Allen & Wheelock produced a series of pistols based upon this action that were all essentially the same except for their overall size and caliber. The largest was the .36, six shot “Side Hammer Navy” revolver, the middle-sized gun was the .31 “Side Hammer Belt” revolver and smallest was the pocket revolver, which was manufactured in .28 caliber. Both of the smaller guns had five shot cylinders. The .31 caliber belt revolver was the middle-sized pistol of the series and was manufactured with barrels ranging from 3-inches to 6-inches in length. All of the pistols in the series featured engraved cylinders that were embellished with scenes of game like deer and rabbits, combined with a forest motif. These pistols were produced from about 1857 through 1861 and it is estimated that between 750 and 1000 of these “belt sized” revolvers were produced.

Like nearly all Allen & Wheelock pistols, the Side Hammer Belt Revolverwent through a number of minor changes and variations while the pistols were in production. The late Paul Henry, noted collector and researcher of Allen & Wheelock firearms, managed to categorize the pistols into different production eras (early, middle, late), based upon the changes in the design of the side plate, number of screws securing it, etc. His book Ethan Allen And Allen & Wheelock – Their Guns & Their Legacyis a must for any collector interested in these uniquely American guns and the company that manufactured them.

The pistol offered here is a classic example of the Allen & Wheelock Side Hammer Belt Revolver in about VERY GOOD+ condition. It is a late production variant, which is established by the side plate design and the addition of a third patent date on the barrel markings. Like so many Allen & Wheelock designs, the lockwork is complicated, over engineered and rather delicate. Thankfully, this pistol still functions perfectly, as many Side Hammer pistols encountered today are in less than great mechanical condition. The pistol has a nominally 5-inch octagonal barrel, which measures exactly 4 15/16 inches. Minor variations in barrel length of 1/8 inch or so are rather common on Allen & Wheelock revolvers. The barrel is long enough to accommodate the complete Allen & Wheelock manufacturing and patent markings. On shorter barreled guns, the roll marks are often incomplete because the barrel is not long enough for the information. The left side of the barrel is clearly marked in two lines:

The pistol is marked with the serial (or assembly) number 782 on most of the major components, including the left side of the grip frame (under the grip), the rear of the cylinder, the loading lever and the cylinder pin. The assembly mark is also stamped inside both of the grips. The pistol has a pleasing dove gray patina with some traces of the original bright blued finish present in the protected areas and nooks and crannies of the frame and in some small areas of the barrel. The gun also has a darker gray age, lightly oxidized patina beginning to develop over the dove gray base color. The roll engraved cylinder retains about none of its original finish and shows a deep smoky gray patina. The cylinder retains about 90%+ of the engraved forest & game animals scene. The engraved scene is very sharp and clear. The loading lever has a smoky gray patina. The loading lever and its locking latch still work correctly. The metal of the pistol is mostly smooth with some scattered patches of surface oxidation as well as some scattered pinpricking with a few small patches of light pitting, primarily on the cylinder and along the edges of the top strap. The action of the pistol works very well with the revolver timing, indexing and locking up crisply. The narrow, curved hammer nose is in fine condition and has not been repaired. This is nice, as these revolvers regularly show repairs to the delicate hammer nose. The bore of the pistol is in about GOOD condition, showing strong visible rifling and even moderate pitting along its entire length. The original brass sight is dovetailed into the end of the barrel near the muzzle and has a nice dark mustard colored patina. The two-piece walnut grips are in about VERY GOOD+ condition and retain about 50%+ of their original varnished finish. The grips are solid, without any breaks, cracks or repairs. The grips only show the normal bumps and dings from carry and use.

Overall, this is a really attractive example of an Allen & Wheelock Side Hammer Belt Revolver that was likely produced just prior to the opening days of the American Civil War. These little percussion pistols never achieved the level of success of guns like the Colt Model 1849 Pocket Revolver, but there are enough extant period images to know that at least some of these little pistols were carried into the field by soldiers in the early days of the war. This pistol functions correctly and has a wonderfully clear cylinder scene. It is a very nice, complete example of a relatively uncommon pistol that would be a great addition to any Civil War era percussion revolver collection.