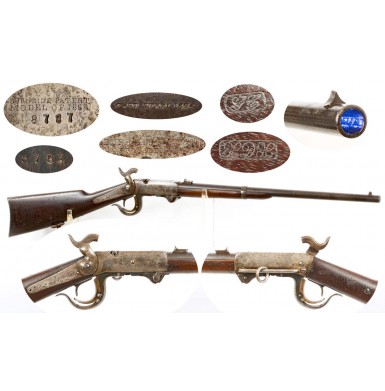 This is very nice example of one of the percussion breechloading carbines that helped the Federal Cavalry to eventually achieve superiority over their Confederate counterparts during the American Civil War. The Burnside Carbine was the brainchild of future Union General and Rhode Island Governor Ambrose Burnside. An avid shooter and promoter of shooting sports, after the Civil War Burnside would go on to be a founding member of the National Rifle Association, as well as the organization’s first president.

Burnside was awarded patent # 14490 on March 25, 1856 for the breech loading design that was central to the Burnside Carbine design. The .54 caliber carbine used a unique tapered cartridge with a foil or brass case and was ignited by a traditional percussion cap. The carbine went through a number of variations; known to collectors as 1stModel, 2ndModel, 3rdModel and 4thModel. The 1stModel Burnside carbine was the first breech loading metallic cartridge carbine to be purchased by the US Ordnance Department, with the first delivery of 200 carbines being made in April of 1856. The most commonly encountered and most issued version of the Burnside, was the 5th Model Burnside Carbine. The 5th Model carbines were produced from late 1863 through the end of the war and were officially referred to as the Model 1863 by the Government, even though the receivers of the guns were marked Model 1864! Roughly 55,500 Burnside carbines of all models were produced and delivered to the US government, making it the 3rd most used carbine model of the Civil War period. Approximately 43,000 5thmodels were produced, in their own serial number ranges. This one has the matching serial number <b>8787</b> throughout, placing very early in the 5th model production run. The gun was most likely manufactured in the latter part of 1863 or in early 1864. Burnside carbines saw significant use during the course of the American Civil War, with some 53,000 being delivered to the Ordnance Department during the war. A survey of some one hundred eighty-five US military officers conducted between 1863-64 rated the Burnside as follows: 17 – Best, 125 – Good, 12 – Fair, 28 – Poor and it was rated “worthless” by 3 officers. This meant that 77% of those officers surveyed had a positive opinion of the gun. Some of the US volunteer cavalry regiments that received the Burnside as part of their supply of small arms were the 1st Michigan, 3rd& 6th Indiana, 5th, 6th& 7th Ohio, 3rdWest Virginia, 14th, 14th& 18th Pennsylvania, 14th& 21st New York and the 2nd, 12th, 14th& 16th Illinois and 4th Wisconsin Cavalry. The serial number of this gun is not listed among those compiled by the Springfield Research Servicein their four volume serial number book set. The two closest numbers to this gun are #8730 (57 numbers below) and #8811 (24 numbers above), both of which were issued to C troop of the 2ndTexas Volunteer Cavalry (US).

This particular 5th Model Burnside Carbine, is in VERY GOOD+ overall condition. The metal is mostly smooth throughout with only some scattered patches of surface roughness and light to moderate oxidation. The barrel retains some traces of the original blued finish, which has worn and faded and blended with a mottled oxidized brown and gray patina. The receiver retains about 10%+ of the original vivid case hardened colors, with most of the finish having faded and dulled, leaving the frame with a mostly dull and mottled brownish-gray color with some scattered surface oxidation. The hammer retains traces of its case coloring as well, matching the frame well. The lock plate retains about the same amount of case coloring as the frame, again matching it perfectly. The iron butt plate has faded to a mottled tobacco brown over gray color, but does retain some nice subtle case colored mottling, along with traces of its coloring. The breech operating lever retains about 20% of its original blued finish. The breech tang retains about 50% of its original vivid fire bluing, while the lower tang retains about 10%. The balance of both parts show a streaky brown over gray patina. The screw heads retain anywhere from 30% to 60% of their original fire blued finish and most of them show only light slot wear, if any. The breechblock retains about 30%+ vivid fire blue on top, with moderate amounts of flaking and fading. The top of the receiver is marked in three horizontal lines:

The same serial number is marked on the top of the breechblock as well. The barrel is marked CAST STEEL 1864 forward of the rear sight, and as is typical the mark is somewhat light and poorly struck. The bore rates about VERY FINE and is brilliantly bright with excellent rifling. There is some very minor scattered pitting present in the bore, as well as some light frosting in the grooves. There are also a couple of small patches of darker oxidation present near the muzzle, which could probably be removed with a good scrubbing. The lock works crisply, and the loading mechanism operates smoothly as it should. The lock plate is marked:

The mark is crisp but appears to have been lightly struck. The cone (nipple) is in excellent, crisp, condition. As previously mentioned, the matching serial number 8787 is stamped on both the receiver and the breechblock. Numerous government sub-inspector initials are located on various metal parts throughout the carbine, including the letters S, H, T and C. These marks remain clear and crisp in all locations. The gun retains the original front and rear sights, as well as the original sling ring bar & ring, and the sling swivel on the lower toe of the buttstock. The buttstock rates VERY GOOD. It shows the usual surface wear, bumps, dings and handling marks expected from a Civil War carbine that saw actual use, but no abuse. The stock is solid and without any breaks, chips or repairs. The forend shows similar scattered dings and mars, matching the butt well. A pair of very crisp and fine inspectors’ cartouches are present on the left side of the wrist. These include a script HDH followed by a script GC. These are the marks of arsenal sub-inspectors Henry D. Hastings and George Curtis. Curtis’ block GC stamp is also present on the comb of the stock, forward of the buttplate tang and on the underside of the forend, behind the retention screw. The upper mark remains quite clear, but the lower mark is worn as the forend is often handled in that location.

Overall is a really solid and attractive example of an early production 5th Model Burnside Carbine that clearly saw service and use in the field and yet came through it all in fairly crisp condition. The gun is 100% complete and correct and has enough remaining finish mixed with the untouched patina to give it a lot of eye appeal. The Burnside Carbine is one of the “must have” US Civil War carbines, as it was the third most used carbine of the war. This is a very good example that shows real world use, but no abuse, and would be a solid example to any collection at a very reasonable price.