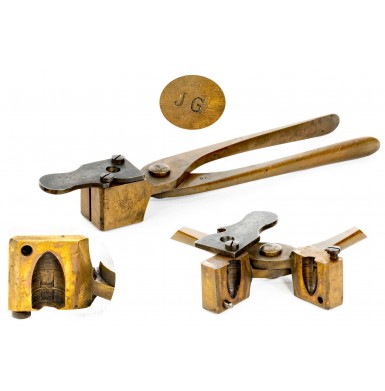 Offered here is a wonderful condition Brass English bullet mold by the famous London mould making firm of John Greenfield & Son. The mold casts a single .525” diameter, two-winged conical bullet. While at first blush it looks like a mold for the two-groove Brunswick Rifle, the nominally 30-Bore (.525”) diameter bullet suggested to me that it might be for the 30-Bore Jacob’s Rifle, which accepted a four-winged bullet. Thanks to arms author, research and collector Garry James I was informed that this mold appears to really be for a Purdey Express Rifle.

The famous Purdey gunmaking firm was established by James Purdey in 1814 on Prince Street in London. In 1826, the firm moved to 314 ½ Oxford Street, where they would remain through the early 1880s. The company specialized in manufacturing the highest quality sporting arms, including rifles, shotguns and big and dangerous game double barreled hunting rifles, often call “Cape Guns”. Sometime around 1851, the firm introduced a winged, flat base conical bullet designed for use in rifle with two-groove mechanical rifling. The bullet was similar to sugarloaf winged bullet used in the Liege manufactured Russian contract “Luttich Carbines” – the Russian version of the Brunswick Rifle. The two-groove Brunswick Rifle used the same type of rifling, but relied upon a patched round ball, rather than a conical projectile. The Purdey bullet received the marketing nickname “Express” and thus the famous Purdey Express Rifle was born. The winged “express” bullet was available in bore sizes from as small as 140 bore (about .31 caliber) to as large as 12 bore (about .73 caliber). 1857 the firm introduced their first breechloading rifle, in 1863 they patented their “bolt action” breechloading system, which was not a bolt but a locking system for the traditional tip-down breechloading action. By 1865 the firm had introduced its first centerfire cartridge guns and the firm was off to the races, manufacturing some of the finest sporting arms in the world. Over the coming decades, Purdey would introduce a variety of “Express” cartridges, a line of high velocity, hard hitting cartridges designed for big game and dangerous game. Of course, the Purdey company remains in business today, still making some of the finest sporting arms in the world. All of these famous “Express” rifles and cartridges began with the muzzleloading, Purdey winged “Express” bullet.

The mold measures 10” in overall length, including the spure cutter, which adds an additional 1 ½” to the brass body which measures 8 ½”. The mold block is nominally 1 ¼” square, with some minor variations in thickness where the arms of the mold join the block. The single mold cavity cases a flat based, two-winged bullet that has a nominal diameter of .525”, with the wings measuring about .55” in length with the overall length of the bullet being about 1”. The left mold arm is clearly marked JG for London mold and accoutrement maker John Greenfield. John Greenfield was initially listed as a Lathe & Tool Maker on Molyneux Street in Marylebone in 1826. By 1839, the listing had been expanded to include Engineer & Percussion Cap Maker and he was located at 10 Broad Street in Soho. Greenfield had added additional products for the firearms industry during the 1830s, including bullet molds and percussion nipples. His customers ranged from the general public and the gun trade, to the British Board of Ordnance and the East India Customer. In 1850 the firm became John Greenfield & Son. Their expanding directory listing at this point said that the firm were Engineers, Bullet Mould, Percussion Cap & Machinery Makers. In 1873 the firm oved to 5 Queen’s Buildings, Pancras Street in London. Under the younger Greenfield’s leadership, the firm remained in business through 1883.

The mold remains in fine condition. The brass has a rich bronze patina with a clear JG mark on the left arm. The blued sprue cutter retains about 50% of its original finish, which has faded and dulled with age and use. The cavity remains crisp and clean and the mold operates smoothly with the steel index pin in place.

This would be a fine condition to any bullet mold collection to accompany your mid-19th century Purdey Express Rifle, allowing you to cast winged bullets for display and potentially for use.