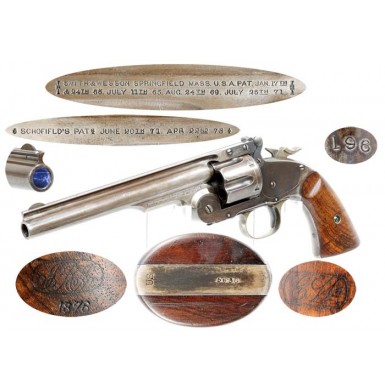 Another interesting chapter in the story of the Smith & Wesson Schofield occurred in the San Francisco area during 1877 and 1878. In 1873, an economic depression had afflicted most of Europe and had migrated to American shores. While the combination of factors creating the crisis were multidimensional, one that directly affected the American West was the Coinage Act of 1873, the decision to move from a gold-silver monetary system to the gold standard. This ended the minting of silver coins in America, which had a disastrous effect on the silver mines of the west, as the value of silver plummeted with the government no longer buying it for use in coins. Additionally, the economic collapse had started in the major cities of the east, primarily New York, Boston and Chicago, and the lack of jobs and economic opportunity had caused many Americans to move west. The pressures placed on western US economies by the precipitous drop in silver value and the increased population resulted in widespread unemployment, particularly in urban centers like San Francisco. The end result was that thousands of unemployed and disenchanted people struggling to survive and in search of hope. Many found a hopeful message with the Workingman’s Party of the United States, a socialist labor movement. On July 23, 1877, some 8,000 members and interested parties gathered near the San Francisco City Hall for a “meeting”, which by the end of the night had devolved into a massive riot that lasted well into the next day. One of the points of tension, and a classic cry of those who would incite violence during hard economic times, was that the problem was the “foreigners”. Little thought was given to the fact that nearly all of those who gathered for this meeting were immigrants themselves who had only been in the United States for one or two generations. The chosen scapegoat were the Chinese laborers, whose massive influx over the last decade had resulted in lower wages and fewer job opportunities for newly arrived easterners. The cry of “Chinamen must go!” echoed through the night and would become the rallying cry for the Workingman’s Party, which would be the genesis of the Socialist Labor Party of America. The riots eventually petered out after heroic efforts by San Francisco Police, supported by the state militia which was called out as well. Soon thereafter a group of concerned citizens known somewhat derisively as the “Pick Axe Brigade” was formed to assist with the suppression of the violence and to discourage further rioting. However, it would take more than a year before the constant threat of possible riots would pass, and much longer before the racial tension would moderate. During this time, the San Francisco Police determined that they were woefully ill-prepared and under equipped to deal with such mass civil unrest. To that end some three hundred US army Schofield revolvers (both first and second models) were issued to the San Francisco Police Force during 1877 and 1878. According to research by Charles Pate (see his Man At Arms article on the subject), the guns were issued from the Benicia Arsenal (about 35 miles north-east of San Francisco). Since 1851, Benicia had been the primary US arsenal on the west coast and would remain so through the mid-1960s. According to Pate’s research, all the revolvers issued to the SFPD from the Arsenal were stamped with large, individual inventory numbers on the backstrap, behind the hammer. Although there are records of the guns being issued, there is no evidence that they were ever returned it seems likely that since the guns were already falling out of favor and most were soon to be sold off as surplus, that the US Army simply did not put any effort into retrieving the three hundred revolvers. The guns no doubt remained in service with the SFPD until they were obsolete, and likely replaced with double action .38 caliber revolvers around the turn-of-the-century. Today, they remain an interesting footnote in the story of the Smith & Wesson Schofield revolver, and make a particularly scarce and desirable variation for the advanced Smith & Wesson collector.

Offered here is a VERY GOOD+ example of a San Francisco Police Department Smith & Wesson 2nd Model Schofield cavalry revolver. The gun is 100% complete and correct in every way and is a very nice, unaltered example of a scarce US military revolver from the height of the Indian War era, that subsequently saw police service with the same police department that gave us the iconic “Dirty Harry” Callahan movie character. The revolver is serial number 5630, and that number is clearly stamped in the butt of the revolver, along with the ownership mark US. The serial number is also clearly stamped on the rear face of the cylinder and inside the right grip panel. The San Francisco Police Department inventory number 196 is stamped on the top of the backstrap, behind the hammer. The inspector initials E and P are crisply stamped in the bottom of the barrel web, with the same inspector initials on the rear face of the cylinder, and the initial E on inside top of the bottom of the frame. The left side of the ejector housing is clearly roll stamped in two lines, with a Maltese Cross at each end of the legend:

This line is also flanked by a pair of Maltese Crosses. The grips both bear very nice cartouches. The right grip has a crisp and clear script CW cartouche for US arsenal sub-inspector Charles Woodman. The left grip has an equally fine script JRJr., for US Ordnance Department inspector Lt. James Rockwell Jr., over the acceptance date 1876. This gun would have been about in the middle of the production for the second Schofield contract from March of 1875. The pistol is really in about VERY GOOD+ condition. The frame retains about 5%-10% of what appears to be the original factory blue, which shows significant fading, thinning and loss. The barrel retains only the most minor traces of blue around the forcing cone and in the recesses of the barrel rib. The balance of the barrel has a slightly mottled grayish-brown patina, with some lightly scattered areas of minor surface oxidation and some very lightly scattered pinpricking. This odd grayish-brown patina with bluish tones is fairly common on the barrels of Schofields that retain minimal finish. The areas of the frame that show major finish loss, particularly the gripstrap and backstrap, have a very nice grayish brown patina similar to the barrel, with streaky traces of blue present. As noted, the barrel shows some lightly scattered areas of minor surface oxidation, and some pinpricking forward of the cylinder and at the muzzle. The frame remains mostly smooth with only some very lightly scattered flecks of surface oxidation and a few tiny areas of very minor pinpricking. The bore of the revolver is in about FINE condition overall, and remains mostly bright with crisp rifling. The bore shows some very lightly scattered pinpricking and frosting, but appears free of any real pitting. The cylinder retains some traces of original blue as well, mostly in the cylinder flutes, with the balance having a grayish-brown patina that matches the barrel of the revolver well. The chambers remain smooth and bright and are in fine condition as well. The hammer retains some traces of case coloring, having faded and dulled significantly with age. The hammer spur retains excellent, sharp checkering. The triggerguard retains about only traces of case coloring and has a mostly dusky bluish-gray patina. There is still some vibrant coloring present on the web at the front and rear of the triggerguard. The trigger retains about 50%+ of its original niter blue, having faded and dulled, with some silvering on the edges and contact points. The screws all retain some traces of their pale niter blued finish, but have dulled and faded. All the screw heads are in good condition, with some showing light to moderate slight wear, and balance appearing quite crisp and relatively untouched. The revolver is mechanically FINE and functions perfectly. The pistol indexes, times and locks up perfectly, and the extraction system functions smoothly and correctly. The revolver locks up tightly and the frame to barrel fit is excellent with no wobble or looseness. The two-piece walnut grips are in FINE condition and remain quite crisp and well-marked. They both are solid and complete with no breaks or repairs. The grips show some minor rounding to the sharp leading and trailing edges of their bottoms. There is some minor surface cracking on the interior of the left grip panel where the grip screw was over-tightened causing strain on the escutcheon which caused some minor surface cracking inside the grip. This is solid and stable and only inside so it is completely invisible. As noted the right grip panel is correctly stamp-numbered to the revolver on its interior and both grips retain very crisp, clear cartouches and the left grip shows an excellent 1876 acceptance date. The grips do show some light bumps and dings from handling, use and storage, but are in truly great condition.

Overall this is very nice example of a scarce US martial handgun from the Indian War era that also has San Francisco Police history. This Smith & Wesson 2nd Model Schofield is 100% complete and correct in every way. The revolver was delivered in 1876, the same year that Brevet General George Armstrong Custer led his 7th Cavalry to their death along the banks of the Little Big Horn River. 2nd Model Schofields are rather scarce, with only 5,285 delivered on contract to the military between 1876 and 1877. By contrast, some 37,000 US M-1873 Single Action Army revolvers were accepted for US military service between 1873 and 1892; about seven times as many! With so many of the Schofields being sold as surplus, and subsequently having their barrels shortened and often receiving new nickel finishes, it is rather difficult to find an all original, un-altered Schofield for sale. In some cases, the Schofield revolvers escaped the gunsmiths at Bannerman’s and Schuyler, Hartley & Graham by being issued to a state militia regiment during the 1880s. This one escaped by fighting socialist rioters in San Francisco, and helping to fight the oppression of Chinese immigrants. Overall, this is a very nice example of a US cavalry revolver, accepted in the most infamous year of the Indian War period, and a gun that would be equally at home in a collection that was dedicated to the arms used by lawmen and police in the Old West. Don’t miss your chance to add a very nice piece of US military, Indian War and San Francisco Police history to your collection.