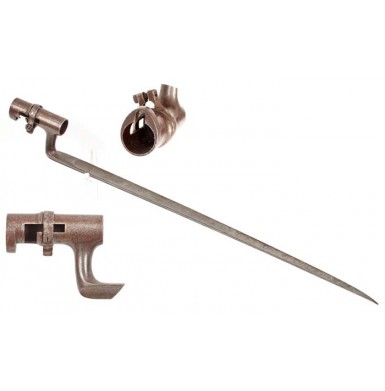 This is a VERY GOOD example of the scarce 1st Pattern Spencer Rifle Socket Bayonet. These rare bayonets have a very distinctive squared off shoulder at the joint between the rear of the bayonet blade and the neck of the bayonet. Only four patterns of bayonets bear this unique shape, and they can all be traced back to the earliest pattern, the Spanish Modelo 1857 Socket Bayonet. These socket bayonets were utilized on the Spanish M-1857 “Enfield” pattern rifles and rifle muskets. These Spanish guns were based upon the British pattern P-1853 rifle musket and P-1856 rifle. Many of the Spanish guns were manufactured in Birmingham under contract to the Spanish government, and the bayonets for those contract guns were produced in the Birmingham region as well. It is the English production of these Spanish bayonets that explains why this unique shoulder shape is found on the Spanish bayonets, as well as the 1st Pattern Spencer Rifle socket bayonet, the bayonets used on the A.J. Drake altered M-1841 Mississippi Rifles and the Confederate Fayetteville rifles. The common link is the English firm of Greenwood & Batley. This firm manufactured the machinery used to produce various small arms and ordnance. It appears that the Bay State Tool Company of Northampton, Massachusetts purchased their bayonet making machinery from Greenwood and Batley, and Confederate records indicate that Greenwood & Batley provided the bayonet making machinery for the Fayetteville Arsenal as well. This common source for the manufacturing machinery is why these four patterns of bayonet share the same distinctive profile. Bay State Tool Company was responsible for the manufacture of both the first Spencer socket bayonets and the bayonets utilized by AJ Drake in the alteration of US M-1841 Mississippi Rifles, which were subsequently issued to the 46th & 51st Massachusetts Infantry. The primary difference between the bayonets lies in the lengths of the their blades (Spanish & Spencer bayonets have 18 ““ blades, while the Fayetteville & Drake bayonets have 20” blades) and the diameter of their sockets. The Spanish bayonet has a nominal .800” muzzle diameter, the Spencer a nominal .817” muzzle diameter, the Fayetteville a nominal .889” muzzle diameter and the Drake bayonet has a nominal muzzle diameter of .918”. Other much more subtle differences exist, such as the length of the face flute, the height of the bridge, the style of the tension ring screw head and the location and style of the locking ring stop stud on the socket. The first pattern Spencer bayonets were a point of contention in November of 1862, when the first 1,200 Spencer rifles were delivered for service to the 5th Michigan cavalry (these would be the ONLY Spencers at the battle of Gettysburg, as part of Custer’s Michigan Brigade). These rifles were delivered with bayonets with 18 ““ long blades, of the Spanish M-1857 pattern, manufactured by the Bay State Tool Company. Immediately it was apparent that these bayonets did not fit well in the standard Pattern 1857 bayonet scabbard then in use throughout the US Army. The bayonet stuck out of the scabbard by at least ““ and immediately drew the ire of Ordnance Department Major Peter Hagner. In fact on November 10, 1862 he penned a letter complaining about the fact that the bayonets were a ““ too long and demanded that the contractors be required to immediately stop delivering them, and to deliver a bayonet with the standard M-1855 pattern 18” blade to would fit the scabbard. A letter from Hagner dated November 26, 1862 noted that Spencer did not produce the bayonets, but that they were being manufactured by a contractor in Northampton. It is not clear how many of these early production Bay State Tool Company Spencer bayonets were produced, but it appears that at least the first 1,200 Spencer rifles were delivered with them. It also appears that at least a few of these bayonets also ended up seeing service with early Sharps rifles (Spencer and Sharps bayonets are known to be interchangeable sometimes). Realistically, it appears that less than 2,000 of these early production bayonets were manufactured. Period photographic evidence shows these bayonet ended up in service with both patterns of rifles. It appears that by early 1863 the production of M-1855 pattern socket bayonets with the correct socket for use on a Spencer rifle were in production, and the early Spencer bayonets became a footnote in the history of American Civil War socket bayonets.

The socket bayonet offered here is a VERY GOOD example of the scarce 1st Pattern Spencer Rifle Socket Bayonet. The bayonet precisely corresponds to the known dimensions of these scarce bayonets. It is 21 ““ in overall length with an 18 ““ blade that has a 17 ““ face flute. The socket is 3” in length with a muzzle diameter of .814”, well within the range of an acceptable muzzle diameter. The bridge of the socket is 1.11” tall, and the nominal measurement for the bridge height is generally 1.12” +/-. The bayonet has a medium smoky gray patina with a thinly mottled brownish age patina over the steel. The face of the blade is mostly smooth with only some lightly scattered pinpricking along the edges of the blade face near the tip and at the ricasso. The underside of the blade has some scattered pinpricking also, and some scattered areas of light surface oxidation. The socket has a slightly thicker brown patina than the blade, and shows some more moderate pinpricking and slightly more surface oxidation. The original locking ring is in place on the socket, and moves smoothly. The tension screw in the locking ring may be a very old replacement from a M-1855 socket bayonet, but the screw is certainly an original screw from the period of use.

Overall this is a nice example of a rather scarce US socket bayonet that would be a perfect addition to your early “Gettysburg Range” Spencer, that may have seen service with the 5th Michigan. The bayonet has a nice uncleaned and untouched look to it and displays nicely. The bayonet would be absolutely appropriate for display with any low numbered, early Spencer rifle, under about 2,500. It might also fit your early delivery M-1859 Sharps rifle, and we know from period images that at least a few of these bayonets saw use on the early Sharps as well. These scarce bayonets rarely appear on the market for sale, and this would be a great addition to any advanced Spencer collection, or a Gettysburg, 5th Michigan cavalry display.