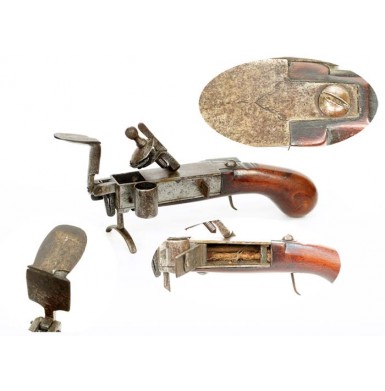 The Flintlock Tinder Lighter was a logical evolution of the conventional flint & steel method that had been used to start fires for hundreds of years. While research and documentation regarding mechanical tinder lighters is scarce at best, it appears that the small, pistol shaped flintlock lighters first appeared during the first quarter of the 18th century and gained popularity by the middle of the 1700s. It remains unclear if the majority of these lighters were made by gunsmiths or other craftsmen, but it seems reasonable to assume that most were not produced by arms makers, as the crudeness of the mechanisms encountered do not imply a gunsmith’s skill. Most are somewhat boxy affairs, usually with an exposed mechanism, but some of French origin do utilize an internal box lock action. In general, the tinder lighters worked much like a pistol, with cock that held a flint and struck a frizzen when the trigger was pulled. The resulting sparks, generated as the flint scraped along the steel frizzen, fell into a pan that held tinder rather than gunpowder. The hope was that the shower of sparks would ignite the tinder producing at least enough smoldering heat to light a punk, candle or small stick, allowing a larger fire to be lit. Most of the tinder lighters of the mid-to-late 18th century included some small storage section where the tinder, often tow, flax or even char cloth, could be stored. As the Flintlock Tinder Lighter evolved, many started to incorporate a small candle holder on the side of the lighter, making it easier to keep all the necessary parts together, and realistically creating the original “flashlight”. By striking your tinder lighter and lighting your candle, you now had a mobile light device, with the ignition system and candleholder all in one. Most tinder lighters appear to have been produced in England, France and the Germanic states. It is usually difficult to assess the country of origin of such a lighter if it is not marked, although most of the simple side lock, exposed action design appear to be either English or Germanic, with most box locks being French. Interestingly, nearly identical unmarked lighters to the example offered here are identified in competing sources as both English and German, and I suppose it is quite possible that the basic form was copied in multiple locations. By the first quarter of the 19th century, the tinder lighter appears to have fallen out of fashion. The largest reason appears to be the introduction of self-igniting matches that were both easier to carry and more reliable sources of flame. While the Chinese had been using sulfur based matches from at least the mid-900s, in Europe the self-igniting match was not really developed until about 1805. Multiple inventors continued to improve upon the concept and by the late 1820s to early 1830s, the match was somewhat common across Europe, with numerous patent variations available, including one from Sir William Congreve, in inventor of the Congreve Rocket. It was Congreve’s rockets, launched from the British ships in Baltimore harbor while attacking Fort McHenry, which resulted in Francis Scott Key’s immortal line in the Star-Spangled Banner: “And the rocket’s red glare”. The match, however, meant the end of tinder lighter production, and as a result the original mobile lighter was relegated to a footnote in history and an interesting collectible that most modern 30-somethings cannot identify or divine the purpose of.

Offered here is a very nice example of a mid-to-late 18th century Flintlock Tinder Lighter & Candle Holder. As noted, I have seen nearly identical examples identified as both English and German, but for our purposes I will rely upon the work of George Neumann who shows an essentially identical example in his Collectors Illustrated Encyclopedia of the American Revolution and identifies it as English, circa 1780. The tinder lighter is approximately 7” in length and is roughly the size and shape of a pocket pistol of the period. The crudely fashioned action is exposed on the right side of the lighter’s frame, and consists only of four parts: a cock with integral tumbler, a trigger with integral sear, a sear spring and a mainspring. The neck of the cock is off-set towards the center of the lighter, giving it a box lock like appearance, while allowing the use of the simpler, exposed lockwork. The center mounted frizzen covers a tinder chamber that is roughly ““ square and slightly less than ““ deep. The chamber is full of old residue and some dust, but mostly what are likely the old remnants of used tinder. The left side of the body of the lighter contains a tinder storage compartment that is about 1 ““ in length and about 5/8” tall. A small hinged door with a simple twist latch covers this area. Old tinder is still in the compartment, which appears to be spun jute or tow, made into cording, which could be unwound and used as a very effective tinder. Just forward of the tinder compartment, a small sheet iron candle holder is mounted, which is about 7/8” tall and 5/8” in diameter, and would accept a small candle about 9/16” in diameter. The interior of the holder shows some old waxy residue. The lighter is of iron and steel construction with a graceful, one-piece semi-bag shaped smooth walnut grip. Some very light and simple engraving is present on the top of the action, behind the cock. The frizzen shows an old, period of use, re-facing, having been “shoed” after a significant amount of use. The applied frizzen face shows significant wear as well, with a small chip missing from the lower right hand edge.

Flintlock Tinder Lighter & Candle Holder is in about VERY GOOD+ to NEAR FINE condition overall, and remains uncleaned with a nice old patina. The action functions perfectly and there is no doubt that one could still induce sparks and light some tinder if the flint was fresh and not as worn as the one in the jaws of the cock. The metal parts have a mottled dark gray and brown patina with some scattered surface oxidation and lightly scattered pinpricking and some minor pitting. The grip is in lovely condition with a nicely burnished appearance similar to a well-worn bannister. The grip shows a small, surface grain crack on the lower left side, immediately behind the tinder compartment, but this is tight, secure and non-structural. The grip also shows some light handling marks and dings, as well as some scattered impact marks on the butt. The lighter clearly shows wonderful age and years of use, but no abuse.

While this wonderful Colonial Era Flintlock Tinder Lighter & Candle Holder is a little outside the scope of the type of items I normally offer for sale, it certainly qualifies as “Firearms Curiosa” and would a nice addition to any collection of mid-to-late 18th century arms and accouterments. It is one of those unique items that shows the influence of firearms on everyday life during the period, and shows just how important the development of the flintlock mechanism was to people who may not have owned a firearm. A quick check of the internet found a nearly identical example in the same condition for sale on a major firearms dealer’s website for $2,250. While the historic interest in these items can certainly reach that level of investment, I think this one is a real bargain, that displays as well, for less than half that amount. This would be a nice desk accent for the office of serious gun collector, and might make a great Father’s Day gift for the gun collector in your life.