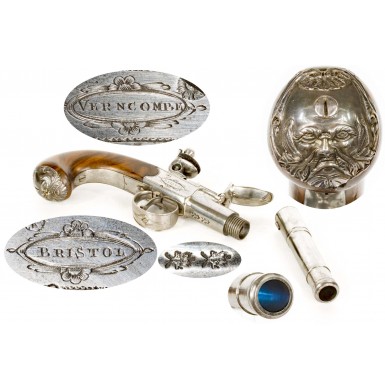 This is a lovely example of the classic English self-defense pistol for much of the second-half of the 18thcentury, the “twist off” or “screw barrel” pistol. These slim, box lock flintlock pistols had easily removable barrels which allowed them to be quickly reloaded with loose powder and ball and were the logical evolution of the earlier “Queen Anne” pattern pistols. Unscrewing the pistol allowed the powder to be poured into the chamber, a ball placed in the concave recess above the chamber, with the load being held in place by the gracefully tapering barrel when it was screwed back onto the frame. This simple system required no carrying of ramrods or loading tools to reload the pistol. A small lug under the barrel of the pistol allowed the use of a barrel wrench to tighten the barrel securely or remove it if it were seized on the threads. These pistols were available in a wide range of sizes to suit the purchaser, as well as with a variety of decorative “trim levels” from simple iron pistols with walnut grips and minimal embellishment to silver mounted pistols that were highly engraved and decorated.

This particular example dates to the mid-18thcentury and was made by Bristol gunmaker Hugh Verncombe, who was active between 1746 and 1785. The pistol is lightly engraved on the frame with simple geometric boarder lines and with simple oval foliate panels that read VERNCOMBE on the reverse and BRISTOL on the obverse. The flat, reinforced cock is engraved with matching geometric boarder lines. The triggerguard is engraved with a floral and geometric motif on its bottom and the face of the faceted steel (frizzen) is engraved with simple geometric patterns and boarders as well. The butt of the pistol has a well-executed grotesque mask butt cap that appears to be of German or coin silver. The bottom of the pistol frame, under the chamber, bears a pair of private proof marks, consisting of a crown over crossed scepters. The pistol is about 6 ½” in overall length, with a 3 7/8” .46 caliber, smoothbore tapered canon barrel with decorative baluster turned rings along its length. The pistol has been cleaned to bright in the European fashion and now has a silvery steel patina with some areas of thinly scattered dulling and light age discoloration. All of the markings and engraving remains clear and crisp, as do the edges of the pistol. The pistol is mechanically excellent and functions exactly as it should. The smoothbore is mostly bright and in FINE condition. The grotesque mask buttcap shows some light tarnish and has a duller pewter patina than the cleaned metal of the pistol. The smooth walnut grip shows some nice figuring and grain and has a simple German silver oval escutcheon at its wrist that is blank. The grip shows some light handling marks but remains solid without any breaks or cracks, and only the most miniscule minor chips around the mask buttcap edges.

Overall this is a lovely English gentleman’s pistol from the period the French & Indian War and the American Revolution. This is the perfect example of an overcoat pistol for an upper middle class or lower upper class Englishman and could well have been an officer’s personal pistol as well. For a gun that is more than 200 years old, and dates from the Colonial period, it is a really lovely and crisp example that would be a nice addition to any collection for a very reasonable price.